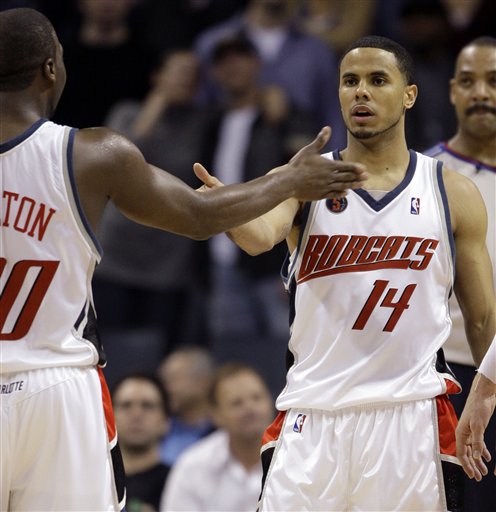 1) Nice win for the Bobcats tonight, 110-101 in overtime over the visiting Chicago Bulls.  AP story here, box score here.  Bobcats break their seven game losing streak and move to 8-18, while Chicago falls to 11-13.

2) Without Gerald Wallace tonight (due to his father’s passing) the Bobcats started with a lineup of Felton, Bell, Diaw, Juwan Howard and Okafor.  That didn’t go so well, as the Bobcats quickly fell behind 17-5.  Raja Bell missed all five of his shots during that opening stretch, and in a strange moment, was ejected after “discussing” a foul with official Eli Roe.  Bell didn’t seem to be particularly upset or animated, but must have said some magic words, as Roe demonstratively ended the discussion by turning to the scorer’s table, calling the tech and motioning for the ejection in one fell swoop.

Bell lingered on the court for a few moments, but soon meandered off without any fuss.  Weird — if I didn’t know any better, I’d think he didn’t really want to play tonight.  Maybe he’s peeved that he couldn’t have just been traded straight to New York to reunite with Mike D’Antoni, and will instead have to parlay here in CLT for two months.

3) No matter, though, as DJ entered the game for Bell while Hollins relieved Howard, and the Bobcats began to dig their way out of the early hole — by halftime, the Bulls led just 45-42.  Ryan Hollins has really been a pleasant surprise so far this season.  When training camp started I had pegged him as a probable Larry Brown roster casualty, but he seems to be in coach’s good graces at this point, and for good reason.  He brings a lot of energy to the table, has cut down on his mistakes, hits his free throws, and has become relatively competent when taking open mid-range jumpers.  Tonight he had 8 points on 3-4 FGs, 2 rebounds and 3 blocks in 15 minutes.

4) The Bobcats really got it going in the third quarter with DJ, Felton, Diaw, Howard and Okafor all contributing.  They led by four heading into the fourth quarter, when both teams really turned it on and treated the Charlotte fans to the best finish of the year at the Cable Box.  Down 94-91 with just 20 seconds left, DJ Augustin missed a contested three-pointer from the wing, but drew a questionable foul on fellow rookie Derrick Rose on the follow-through.  Rose nearly erupted, and rightfully so — it could have easily been a no-call.  Augustin nailed all three free throws to tie the game.  Following a timeout, the Bulls put it on Rose to win the game.  Augustin played good enough one-on-one D, forcing Rose into a tough shot that Emeka Okafor was able to swat away at the buzzer.

In overtime, Okafor, Felton and Augustin combined for 16 points, while the Bulls could only muster 7.  Okafor had another big block of a Rose layup, this time with a minute left, that essentially had the effect of slamming the coffin shut.  From there, free throws provided the proverbial nails for said coffin.

6) Juwan Howard ended up with 8 points and 5 boards in 26 solid minutes.  It’s been trumpeted that the guy is a consumate professional, and that was evident tonight in his first action as a Bobcat.  He picked his spots carefully on offense without disrupting anything, and seemed to always be in the right spot on defense.  With the acquisitions of Diaw and Howard in the last week, the Bobcats look to have significantly upgraded their PF spot over the combo of Sean May and Jared Dudley.

7) DNP-CD for Adam Morrison tonight.  Strange, as I thought that Andres Nocioni (whose game is aging precipitously) would have been a good matchup for him.  But Adam has been slumping, so Matt Carroll got all of the extra minutes at SG tonight (30 minutes, surely his most extended action of the season) and responded pretty well with 7 points (1-2 3PT), 4 rebounds and 3 assists.

8) Some quick comments on the Bulls:

a) Del Negro sure has a lot of support, with Del Harris and Bernie Bickerstaff as his top two assistants.  It’s almost like the Bulls were a little nervous about whether he was ready to be a head coach…

b) Maybe I just caught a small sample that doesn’t represent the whole relationship, but judging by a couple of interactions between Ben Gordon and Del Negro, I’d say the former doesn’t care for the latter much.  One particularly funny moment at the end of the first quarter: off a jump ball, Gordon controls the tap out on the wing.  He’s literally inches from his coach, who is clearly exhorting him to pass the ball out to Rose to reset the offense.  Gordon completely ignores this, calls for a big to come over and screen for him, gets a little daylight and drains a 17-footer.  Believe me, this was hilarious to see and hear in person.

c) I see that one of the storylines in the AP recap is how Augustin got the better of Rose in the matchup of lottery PGs, and he certainly did; but Rose is pretty special.  He’s as good as advertised, a prototypical NBA point guard, and should probably be penciled in as the starting PG for the East All-Star team for the next decade.

d) The Bulls still have the same problem they’ve had for the past couple of seasons: no low-post scoring threat.  Tyrus Thomas and Joakim Noah have burned through their upside, and look stuck at “role-player” status.  Drew Gooden is thisclose to being replacement level, and Aaron Gray ain’t going to cut it.  Meanwhile, the Bulls are paying Luol Deng superstar money and getting “solid starter” return on the investment.  Not good…

9) Next game: Friday night on the road at Memphis (mmmmmmm, Rendezvous Ribs).  We should have Gerald back and will be looking to snag a road victory against a young, beatable Grizzlies club.