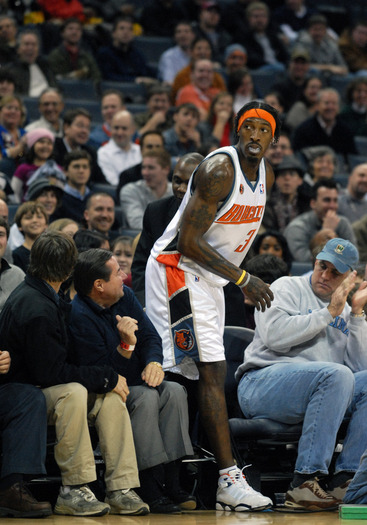 2. This was a matchup of the two worst teams in the East, and it was accordingly brutal to watch.  How brutal was it?  The two teams shot a combined 36% from the field.  The Wizards never scored 20 points in any quarter.  The Bobcats had a 10 point second quarter.  The score at halftime was 36-36 — seriously.

3. Thankfully, the Bobcats were less brutal than the Wizards, and were able to separate themselves just enough down the stretch.  With the Bobcats struggling mightily to put points up on the board, I was surprised that Larry Brown didn’t experiment with his bench in an effort to jumpstart the offense.

But it seems like the time for that has passed, and Brown has tightened the rotations up.  In the second half, he stuck mostly with DJ, Raymond, Carroll, Diaw and Okafor.  Adam Morrison and Alexis Ajinca recorded DNP-CDs again, while Ryan Hollins and Juwan Howard only got 5 and 4 first half minutes, respectively.

4. If you’re looking for bright spots for the Bobcats, it has to be Emeka Okafor.  Mek went for 29 points (10-15 FG), 18 rebounds (6 offensive), 4 assists and 3 blocks tonight.  He was easily the Bobcats best option on offense tonight, again looking confident and aggressive.  He went to the line an amazing 17 times, reflecting said aggression.  The only downside to his game tonight was that he hit only 9 of those 17 free throw attempts.

Oh, and that attempted monster jam that he came up a bit short on.  That was pretty embarrassing.

But anyways, have you looked at Mek’s game log for December?  I was thinking that he’d been on fire since Diaw got here, but in fact he’s been playing strong all month.  Does Okafor deserve to be in the conversation for backup All-Star center in the East?

5. Gerald Wallace was also able to buck the trend of poor shooting on the night; he had an efficient 16 points on 6-7 FGs to go with 8 rebounds.  He also had a monster alley-oop jam late in the fourth to help the Bobcats pull away and send the crowd home happy.

Love the look on his face in the pic above; like he’s sneaking onto the floor from the stands.  It’s from a moment in the first half when he chased a loose ball up in the stands — he ended up all the way up by the dude in the bright orange sports coat.

On the other hand, Caron Butler is good (31 points on 12-21 FG).  If the Wizards care to go in full-on rebuilding mode, I’d gladly take him off their hands.  He’s the kind of fringe superstar that a small-market team might actually be able to build a competitive team around.

7. Merry Christmas, Bobcats fans.  The Cats are off until Friday night, when they travel to New Jersey to take on the Nets and their red-hot, newly minted star, Devin Harris.