If Dr. James Naismith had designed a 4 on 4 game instead of a 5 on 5 one, the Bobcats would be set. Between JRich, Gerald Wallace, Ray Felton, and Emeka Okafor, the team’s four starters are on par with any other squad in the East. The issue, of course, is when those pesky refs whistle in the 5th guy for the tipoff. So that brings us to our first look at the offseason Fifth Starter Search.

NOTE: Check out the YouTube Playlist above for some quick video highlights of the players mentioned. 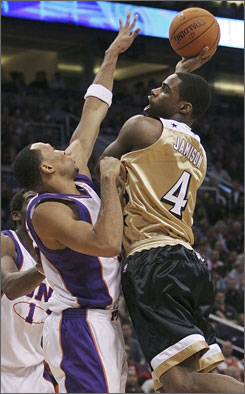 Jamison had a career year in 07-08 making the All-Star Team for the second time and doing his best to lead Washington to the playoffs while staying healthy on a team challenged by injuries.

PROS: The native Charlottean and former Tarheel possesses one of the most unique offensive repertoires at the PF position. Antawn is a very good three-point shooter, can drive-stop-and pop, and has a nice set of post-up moves down low. At 6’9″/235 Antawn has the size to guard the League’s new breed of mobile big men both on the block and on the wings. Although Jamison turns 32 in June, he’s coming off his best three seasons as a pro, ending the ’07-’08 campaign averaging a career high 10.2 rebounds per game.

CONS: Jamison will be 32 in June and will likely demand a huge salary that pays out BIG over at least the next four years. While Jamison has been a beacon of health over his 10 NBA seasons, you have to believe at 36 years old he’ll hardly be worth MAX-type money. Although Antawn played with former Piston Rasheed Wallace at UNC, he’s not exactly the same all-around talent. Larry Brown tends to value some defense out of his bigs and that’s something the scoring-machine Jamison isn’t known for. Also with coach Brown, Ray Felton, Sean May, Michael Jordan, Buzz Peterson, and Phil Ford already in the organization, the ‘Cats hit their Tarheel quota quite a while ago. Let’s move on.

OUTLOOK: Teaming up a versatile, offensively dynamic forward like Jamison next to Emeka Okafor makes a lot of sense. Add to this the fact that you’d be stealing directly from your division competitor and you can see why the Bobcats would consider it. If Jamison was in his late 20s instead of his early 30s this would be a no-brainer–as it is, the ‘Cats are better off looking at a younger option.

At 26, Drew Gooden has found a way to play for four different teams in his six NBA seasons. While this feat wouldn’t impress the Eddie Houses of the world, for a big man with legitimate skills it’s a genuine anomaly.

PROS: Maybe Gooden’s coaches aren’t noticing but the former Kansas Jayhawk has been churning out near double-double seasons since being drafted by Memphis in 2002. He’s remained relatively healthy, shoots free throws with incredible accuracy for a big man, and handles himself just fine on the boards. Gooden’s contract is relatively sane as well–he’s owed one more season at just over $7 million. You’d think with all of these positives the Bulls would keep him off the market but with Tyrus Thomas in the wings, one of them will have to go.

OUTLOOK: Considering that Gooden is just entering his prime and is going to give you 15/9 per game while staying in the lineup AND he’s not going to break the bank doing it, he’s a very good buy at the position. The issues come up on defense. If coach Brown could coax Gooden into staying focused on D, then maybe we’re just on to something.

STATUS: Under Contract (Last year of rookie contract at $3.5 million).

Back in 2005, then coach/GM Bernie Bickerstaff had two lottery picks to play with. He drafted a PG with the first (Raymond Felton) and was eyeing a PF with the second. While Sean May ended up being the pick, the guy that Bickerstaff wanted all along was snatched up by Toronto just a few spots earlier–Charlie V.

Villanueva was the runner-up for ROY during his first season with the Raptors, so with his stock very high–and with Chris Bosh firmly entrenched as the starter–the Raps moved him along to the Bucks where Charlie has languished ever since. His numbers have dropped from the 13ppg/6rpg of his rookie season and sunk even further last year with the arrival of The Chairman. After all of the international diplomacy that the Bucks had to go through to acquire Yi Jian Lian from China, the team was certainly going to play him–going as far as guaranteeing him minutes. This was accommodated at the expense of Charlie V and the former UCONN star had trouble finding consistent minutes on the court.

PROS: Villanueva, like Jamison, has a very unique skill set for an American-born PF. He likes shooting the three, is a nice stop-and-pop shooter from the about fifteen feet and can beat almost all guys his size off the dribble. He’s an adequate rebounder and shows the ability to block shots when he’s motivated. Charlie also comes cheap and with little risk; he’s still under his rookie deal and since he’s in the same draft class as Sean May, you could essentially audition them both for the year and then keep whoever works out best or let them both go. Milwaukee is probably selling low now after drafting Jian Lian so I don’t think they’d ask for much in return.

CONS: After regressing for two seasons, you have to wonder if this is going to be his career arc or if he’s just been dealt a crappy hand in terms of coaches and system. Out of UCONN he had the reputation of being kind of a space cadet and his lack of focus has come in to question during his current stint in Milwaukee. Would teaming with a veteran coach like Brown and reuniting with former UCONN teammate Okafor sort him out? An interesting possibility to be sure.

OUTLOOK: Milwaukee has a lot of offensive talent on the roster at the moment and they’ve just hired a defensive-minded coach in Scott Skiles. Sounds like a recipe for change to me. Maybe a future (lottery protected) first-rounder would be enough to pry Charlie V away for a season and at that price–with his talent, its not a bad deal at all.

Now we’re talking. Elton Brand has a player option opt-out of his contract this offseason and if he chooses to exercise it he’ll be on the open market as of July 1st. A career 20 point/10 rebound per game, multiple-time All-Star, Brand will no doubt attract a lot of attention if and when he hits free agency.

PROS: Although he’s only 6’8″, Elton Brand’s 7 foot wingspan makes him an incredible rebounder and shot-blocker and an absolute scoring machine in the low post. Arguably the game’s most underrated player, Brand has averaged a remarkable 20.3 points and 10.2 rebounds a game in his 9 NBA seasons–oh, and 3.9 of those boards are offensive while he’s somehow managed to tack on 2.1 blocks PER GAME during those nine years as well.

CONS: Brand will turn 30 years old next March and a six-year max contract offer will likely see his new team paying out something like $25 million in 2014 to a 36 year old PF. Brand missed most of last season to an achilles rupture but it was the first major injury of his career and he’s never been accused of being injury-prone. Other than that, there’s not much not to like about Brand. He’s stated repeatedly that he’d like to go to a contender and there are rumblings that Miami is secretly courting him but any deal for Brand would likely have to go through a sign-and-trade and I can’t see any team offering much more than the Bobcats. With their current cap space, the team could offer Adam Morrison ($4 million), Sean May ($2.6 million), and their lottery pick this year (projected at #8) to the Clippers for Brand. This would also create a HUGE cap exception for LA. Sure, its a steep price but that’s what it takes to import an All-Star to an expansion franchise.

OUTLOOK: Imagine a starting five of: Felton, Richardson, Wallace, Brand, and Okafor. That’s arguably the best starting five in the East. You’d still have Mohammed, Carroll, and Dudley to bring off the bench as well. Pick up a solid backup PG and all of sudden the Bobcats are in the discussion of teams to beat in the Eastern Conference.

Before you ask, no, this is not a joke.

After leading the Tarheels to an NCAA Championship during his sophmore season, Sean May was drafted 13th by the Bobcats back in 2005. Since then he’s played a total of 58 games. To put this into perspective: Raymond Felton, his UNC teammate, drafted just a few spots ahead has played in 237 contests. During his first two seasons, Sean May would start slow, get a little hot, and then go down with various knee or joint injuries and finally be shelved for the season. Last year, he just cut to the chase and threw in the towel before the season even began. He had micro-fracture surgery in November of 2007 and should be able to begin playing at an NBA level around training camp 2008. Again this is not a joke.

PROS: Few fans have actually had the opportunity of seeing May play and that’s a shame because when he does, he’s a damn good PF. The guy doesn’t rely on athleticism (which is why I’m so optimistic about his quick return) to score down low or get boards. The girth which has plagued his knees also allows him to camp out down low and use those soft hands (sorry, I love that cursory description of May’s game) to grab boards and flick in put backs. He’s got a nice 20 ft jump shot and is even capable of blocking the occasional shot (see the 2006 game at home against Cleveland in which May blocks Lebron James to seal the game). Sean May has got skillz.

CONS: One more knee sprain and Sean May may have to join the ranks of Jay Williams and Ralph Sampson in the annals of Careers Lost To Injury. He’s in the final year of his rookie contract and if he can’t finish the season, there’s a good chance he’ll be in another uniform next year (probably one with a foreign language written on it).

OUTLOOK: Ok, here’s why I’m ranking Sean May as the #1 option at PF for next season: If he’s healthy, then he’s more productive than anybody on this list except for Brand and costs millions less. His low post game is the perfect complement to Okafor, he’s a UNC guy like coach Brown, he’s a proven winner, etc., etc. If May can manage an entire season next year, then there is no reason why he couldn’t average 15/10 a game and make Bernie Bickerstaff look like less of an idiot for not trading up in the 2005 to get Chris Paul. I’m personally rooting for Sean May to make it…but MJ- you really ought to draft a backup plan just in case.

2 thoughts on “The Fifth Element”