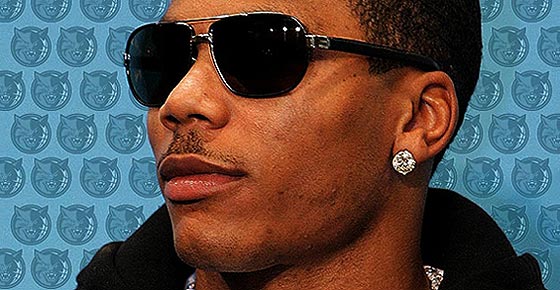 MJ’s stance was that he should receive compensation out of the Bobcats slim budget to show his face…even though he is the second largest shareholder in the Bobcats and head of basketball operations.

I don’t know why Mike doesn’t show up…

I don’t care much about Jordan. He’s an icon, but not an entertainer. If he’s not going to make the game experience better, why would I give a shit whether he shows up or not?

I would definitely like to see an owner at Cats games…but it’s not Jordan or Johnson. He knows how to entertain and he knows how throw a party.

Is it getting hot in here?

The Bobcats need to hire Nelly as “Arena Vibe Manager” because the entertainment portion of Bobcats Sports and Entertainment, Inc. is a joke. Our half-time shows regularly consist of “staff appreciation night” and random award ceremonies. How about a Nelly half-time show? He could pop up unannounced in the DJ booth on the upper level.

There were even a couple of games last season where a concert was held immediately following the game in the arena. Unfortunately, the performers were acoustic Christian rockers and sub-par gospel acts. What about a Nelly concert? They could set up the show in the practice court and have ticket holders attend while people on the street watch in envy.

If the owners want to sit at home to watch most of the games, I’m cool with that. But they need to make sure the fans are getting the best possible experience by using their resources at hand.