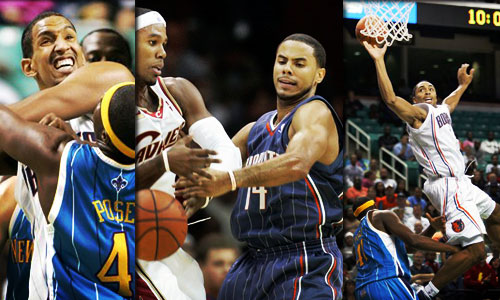 Even though the Bobcats are off to a meager 1-3 to start this preseason we at the Baseline find ourselves giddy with optimism.  Yes, it’s true – damn true.  What is it that has us so jacked for the October 28th opener at Boston?  I can think of at least, uh, 5 things…

1. The Youngsters are bringing it.

Or should we say, “wow, Larry Brown is actually playing rookies?”  Or, “the Bobcats’ roster is so thin that 2nd Round picks play 1st Round minutes!”  No matter how you slice it, the fact that both this year’s and last year’s rookies are putting in quality performances can only mean good things for an organization that has specialized in Draft Day Turnovers (of the unforced variety).

Last season we saw how good D.J. Augustin could be – especially pre-“8 Minute Aaaaabs” injury – and he’s been solid as expected this preseason playing the backup point, getting to the line often and shooting the ball from the field at a nice 53% clip (compared to 43% for Raymond Felton).  Nobody expected his 2008 Draft classmate, “Alex Ajin-ka” to “beast it” out of the gate (well, maybe reggie expected it) but “beast it” Ajinca has.
I’m not really sure why the beat writers aren’t making a bigger deal out of this.  Does anybody remember how terrible ‘Lex was last season?  His only memorable moment came during garbage time of a mid-season Chicago game in which he enticed Aaron Gray into a shoving match that resulted in Ajinca’s own teammates laughing at him.
Now all of a sudden Alexis is dunking in putbacks, tipping in missed shots, fighting through screens, attempting to defend the pick ‘n roll.  Does anybody realize that if he keeps this up, the Bobcats just might have an asset on their hands?  An athletic 7-footer with a soft touch and skills?  Ok, I have to stop…  Just keep it up ‘Lex and prove both Coach Brown and reggie right.

Meanwhile, this year’s rookie tandem is paying dividends right from the start.  Gerald Henderson is second on the team in scoring at around 11ppg and has got to the free throw line more than any other Bobcat so far this preseason.  Unlike Adam Morrison, Sean May and Jared Dudley, Henderson looks like a basketball player and his athleticism and understanding of the game has translated very quickly to the NBA.  Once he’s made it to the charity stripe, Henderson hasn’t shot the ball all that great (67%) but fortunately the team has assistant coach Capel on hand to teach guys named “Gerald” how to improve their free throw shooting.
Fellow rookie Derrick Brown has quietly put up consistent numbers over the preseason as well.  The Robert Horry-esque combo forward hasn’t dropped any 20 point games yet but netting around 8pts a contest in under 18 minutes ain’t too shabby for a dude drafted in the mid-second round.  The second coming of Bernard Robinson he most definitely is not.

2. The Bobcats are Competing against good teams without their starting frontcourt.

The fact that the Bobcats are playing quality opponents tight while starting Manny from Scarface at the 4-spot and Danny Glover at center is kind of mind blowing when you think about it.  And even though Radmanovic is struggling with his shot, his effort playing the four and doing all of what Coach Brown has asked of him is admirable.  We weren’t sure that Vlade was capable of something like that and it’s reassuring to know that the Radman can step in for 5 minutes a game and give Boris some relief.  Speaking of Diaw, I loved seeing Gerald Wallace’s face light up after the second Cleveland game when reporters asked him about Boris and Tyson Chandler’s return.  He didn’t even have to answer the question.  If the ‘Cats are playing this well now, this soon in the preseason, just wait until they get their starting center and PF back.

Keanu Reeves could do a better job than these scrubs.  Coach Brown has been at the replacement officials in the media all week playing psychological games with them as if they were seven-foot one-hundred-and-ten pound frenchmen.  He has a point.
Practiced NBA officials are downright horrible and those guys do it on a night-in night-out basis for years.  The Replacements are a buncha dudes who weren’t good enough to take Steve Javie’s job.  Seriously?  How bad do you have to be in order to lose a roster spot to Dick Bavetta or Joey Crawford?  Can’t these new guys learn how to throw a game properly?

One of the not so rosy developments of the preseason is Gana Diop’s devolvement into the team’s 3rd center.
Now Diop can play him some defense, all of the turbo-geek sportswriters and their formulas have pointed this fact out over the past few seasons.  Opposing centers just don’t dominate when Diop is on the floor.  So why isn’t Diop playing?
Brown has been openly criticizing Gana’s conditioning and that is probably true but I think that once the games start counting Diop will be the one backing up Tyson at the five.  Nazr Mohammed’s 19mpg has “showcasing him for a trade” written all over it.  Gana will play his way into shape and be fine come November.

In Jack McCallum’s excellent book on the ’05-’06 Phoenix Suns “Seven Seconds or Less” he relays a story about Boris Diaw’s inability to remember the English word “mulligan” and instead referring to it as a “hooligan.”  Apparently, Boris wanted a “hooligan” every time he missed a shot in practice.  Raja Bell has been missing a lot of shots this preseason.  And yes, he has proven that it is humanly possible for an NBA player to shoot 11% from the field.  But we must remember that Raja is a special case.  Now that Bruce Bowen has retired, Bell has taken on the official role of OLD MAN WITH DIRTY TRICKS WHO ONLY SHOOTS THREES and that role requires a special kind of conditioning and stamina training.  Mail it in during the preseason and work yourself into game shape early in the regular season, help guide your team to the playoffs after the Break OR if your team isn’t good enough to make the playoffs, play hard come New Year’s so that you can get traded to a contender.  Remember also that Raja is playing for one last decent multi-year contract this summer and he won’t get it by shooting 11% from the floor.  Go ahead and give him a hooligan for the entire preseason. 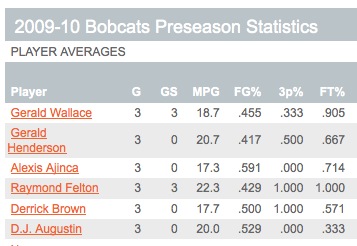 12 thoughts on “5 Things We Know About The Bobcats: Preseason Edition (vol. 1)”