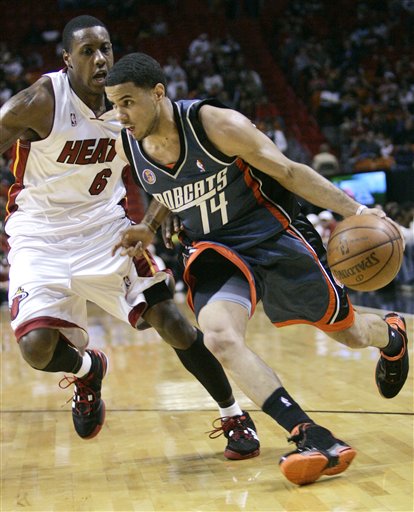 1.  The Bobcats lose a close one on the road to the Miami Heat, 96-92.  AP story here, box score here.  The Cats have now lost five straight since losing Gerald Wallace in the dramatic win against the Lakers, and fall to 19-31.

2.  With Raja Bell out with a groin strain, and Adam Morrison and Shannon Brown traded away, the Bobcats come out with a makeshift starting lineup of Augustin, Felton, Diaw, Howard and Okafor — which matches up pretty well with Miami’s first five: Chalmers/Wade/Marion/Haslem/Magloire.

Total snoozer of a first half, punctuated by a Heat mini-run that propelled them to a 43-39 halftime advantage.  Wade (duh) led the way for Miami, while DJ and Juwan Howard paced the Bobcats.

3.  The Heat pulled away a bit more in the third quarter, so the Bobcats enter the final period down 69-61.  The Cats fought hard in the fourth, twice cutting the deficit down to just two points, but could never get any closer — both times Daequan Cook hit big three-pointers to hold the Cats at bay.

Felton hit a three with 43 seconds left to cut the lead to four and give the Bobcats one last chance.  They actually forced a Dwyane Wade miss on the other end, but any hopes of a thrilling comeback were dashed when Wade grabbed the rebound.

4.  Wade was supposedly playing with a touch of the flu, and did only play 31 minutes; despite that, he led the way for the Heat, netting 22 points, 4 rebounds, 4 assists and 4 steals.  The Heat also got great contributions from their two young guards: 16 points (4-7 3PT) from Daequan Cook and 16 points/13 assists from Mario Chalmers.  Wade, Cook and Chalmers shot a combined 22-39 (56%) from the field, which shouldn’t be unexpected with Raja Bell out.  DJ and Raymond are undersized when they have to play together, which allows opposing guards lots of good looks at the basket.

With the Cats so shorthanded, Alexis Ajinca got a little five minute run spanning the end of the third and beginning of the fourth.  He nailed a 20 footer, then got fouled taking another and hit both free throws for a personal 4-0 run.  He also grabbed 3 rebounds in those limited minutes — nice that he ventured into the paint, being 7’1″ and all.

6.  Apparently, Vladimir Radmanovich was in Miami with the team and going through his physical in the hours before the game.  The team had hoped to be able to activate him for the game (pretty desperate, huh?) but was stopped by the league because L.A.’s early Sunday gametime had prevented them from getting physicals done for Morrison and Brown.

7.  In the big picture, I’m perfectly OK with taking this loss.  Though we’re still just a few games out of the 8th playoff spot, what exactly would getting to the playoffs do for us?  We’d get a couple of home playoff games in which we’d get absolutely obliterated by Lebron and the Cavs, and worst of all, we’d lose our draft pick (it would go to the Nuggets to finish the deal for the pick we used on Ajinca).

8.  And looking ahead to the trade deadline, I’m still expecting Raymond Felton to be dealt.  Rick Bonnell has recently floated the idea that the Bobcats might actually be willing to to trade DJ Augustin, thinking that the bad economy will keep the market for Raymond Felton low enough for the Cats to keep him this offseason.  That would be foolish, though.  Augustin is already a better shooter than Felton, will be just as good of a point guard once given the opportunity to singularly run the team, and is on his rookie contract for a few more years.

I’m wondering if the Bobcats had Bonnell float that idea in order to drive up the market for Felton a bit.  We know that Dallas and Portland may be interested, but if Jameer Nelson is going to have surgery on his shoulder (that decision will be made soon) then Orlando would seem to be the perfect destination for Felton.  It would be great for them — they’d get Felton for their playoff run.  If they liked what they saw, maybe they’d consider resigning him as Nelson’s backup; if not, they could let him go.

But do the Magic have anything the Bobcats would want in a deal?  If the Magic were desperate enough, I’d ask for Courtney Lee (with Brian Cook thrown in to make the salaries match).  I’m sure the Magic have no intentions of giving Lee up; but if Nelson chooses to have surgery, they couldn’t go into the playoffs with Tyronn Lue and Anthony Johnson running point and would thus have to consider it.

9.  Next game is Monday night, back at the Cable Box hosting the LA Clippers at 7 PM ET.  We’ll get our first look at the Rad Man in a Bobcats uni and a good chance at a win.