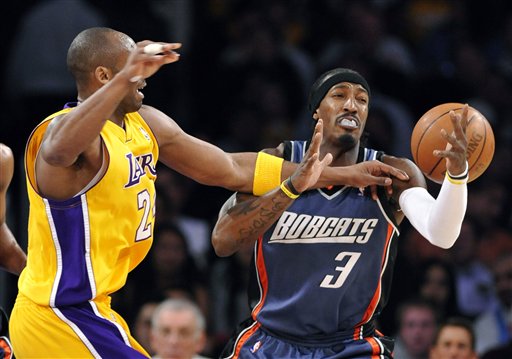 1.  Lots of drama out on the West Coast, as the Bobcats beat the Lakers in double OT, 117-100.  AP story here, box score here.  The Bobcats have now defeated the Lakers five out of the last six times they’ve matched up, and move to 1-1 on the current road trip and 19-26 overall.

2.  Quick television notes: this one was picked up by NBATV, giving Charlotte their first nationally televised game of the regular season (we did have a preseason game with the Lakers televised by TNT back in October).  I’m actually watching in HD on FSN Carolinas HD — the first time I’ve been able to see one of these HD telecasts on Time Warner.  Looks great, wish all the road games were in HD like this.

3.  Since this one’s a 10:30 PM ET start, I’m going to be writing as the game goes.  Nice pregame show with lots of comments from Raja Bell about guarding Kobe, a confident Juwan Howard essentially predicting a victory, and lots of talk about the Bobcats spirited performances against the Lakers in the past.

Speaking of, ever since Ari dissed the Cats, it hasn’t gone so well for the Lakers against us.

4.  First quarter is a good one for the Cats, as the starters play well and get out to a 23-16 lead.  All five starters scored, with Gerald Wallace playing particularly well.  Crash was very aggressive going to the basket, getting 10 points on 4 layups and a dunk.  The Lakers, meanwhile, were flat and oddly out of synch.  Kobe was 0-4, but Bynum was strong, going for 10 points/7 rebounds in the quarter.

5.  The second quarter saw the Lakers roar back, doubling their first quarter output and cutting the Bobcats lead to 49-48.  Kobe heated up and scored 12 in the quarter,  Bell had a rough sequence guarding him midway through the quarter, picking up three fouls in less than a minute.

The Cats second unit of Sean Singletary, Shannon Brown, Adam Morrison, Juwan Howard and Gana Diop saw significant minutes in the quarter (though always with one of the starters — never all together) and didn’t totally crap the bed, so that’s something.  Gerald Wallace came out early in the quarter and didn’t come back due to back spasms — he briefly came back to the bench with a heating pad on, but then left for the locker room again.  Hopefully this is just a minor thing…

Tough ending to the quarter: with a little over a minute left, Diaw gets a steal from Bynum, and the Bobcats run out for a fast break, which ends with a beautiful Raymond-to-Shannon alley-oop for a 47-40 lead.  However, the Lakers quickly went back the other way, and found Gasol back cherry-picking behind Morrison.  Adam tried to foul, but caught Gasol awkwardly on the arm/head as he slipped in the dunk.  Flagrant foul, Gasol hits the free throw, then Kobe hits a jumper for a 5 point possession.  Ouch.

6.  Wallace is back out for the third quarter and looking fine.  Ariza apparently suffered a concussion at some point in the first half and won’t be returning — I didn’t catch that at all.  Anyways, strong third quarter for the starters again, Felton in particular.  Adam Morrison punctuated things with a tough three pointer on the Bobcats last possession to push the lead out to 76-70.

7.  Fourth quarter begins with a bang, as Shannon hits a tough three to extend the lead to 79-70.  However, things get stagnant and we’re still stuck on 79 several minutes later.  Gerald picks up offensive fouls on two straight possessions, then a technical arguing the second one, so the Lakers cut it to 79-78.  Diop gets a tip in to stop the bleeding for the Bobcats.  Midway through the quarter, and the Cats and Lakers are playing even-up basketball.  Crucial stretch comes with just under five minutes left, when Boris Diaw goes on a little personal run to bump the Bobcats out to a 90-83 lead.

Then a killer: Crash has an open lane to the basket and takes off, only to be met by Andrew Bynum.  Bynum’s a bit late closing off the lane, and throws a brutal elbow right to Gerald’s exposed ribs as he was lifting towards the basket.  Gerald goes down in a heap, stays down, and has to leave the game.  Flagrant foul on Bynum gives us two free throws and the ball, but Raja Bell blows both free throws.  On the next possesion, Diaw gets fouled but also misses both of his free throws.  Meanwhile, Kobe is taking over with seven straight points, then an assist to Derek Fisher for a huge three pointer that ties the game with 15 seconds left.  WIth the game on the line, you know who’s taking the shot for the Bobcats: Raymond Felton.  Ray shakes free for a decent look at a 20 footer at the buzzer, but misses short and we’re off to overtime.  Five missed free throws in the final minute of regulation — ugh…

8.  Overtime begins ominously, with the LA crowd buzzing and the Lakers looking sharp in scoring the first 6 points of the period.  Bobcats battle back, though, and down three with forty seconds left, Shannon Brown induces Kobe’s sixth foul — DQ.  Diaw then gets a huge 3-pointer to tie the game at 103 with 30 seconds left.  Another missed, golden opportunity follows, as Okafor knocks the ball away from Gasol in the post and has a chance to come up with the ball, but it eventually squirts away out of bounds off the Bobcats with six seconds left. Miraculously, Diaw tips the inbounds away from Odom and Shannon Brown secures the steal, timeout Bobcats.  Five seconds left, inbounds to Diaw, who gets smothered by good Laker defense and barely even gets a shot up.  Double OT, Bobcats/Lakers, again.

9.  2nd OT, no Kobe, no Gerald Wallace.  Shannon Brown steps up huge for the Cats, with a putback, then a big three pointer.  But Bynum is big for the Lakers, and we’re at 112-110 Bobcats up with a minute left.  Okafor hits a clutch baseline 12-footer to go up 114-110, then forces a Bynum miss on the other end.  The Lakers are now forced to foul, and Felton hits both to push the lead to 116-110.  Okafor hits one more free throw to close the scoring, and the Bobcats win it 117-110.  Larry Brown gets treated like the old friend that he is to the Lakers celeb fans, getting congrats, hugs and handshakes courtside from Andy Garcia, Lou Adler, and Jack Nicholson.

10.  Phew!  What a game — so many solid individual performances tonight.  As usual, all of the Bobcats starters were solid.  Raymond Felton was one assist away from a triple-double: 22 pts/11 rebs/9 assists with only 2 turnovers.  Boris Diaw was one assist and one rebound away: 23 pts/9 rebs/9 assists.  And Shannon Brown was huge off the bench, with 14 points.  But the glow of this win will quickly fade, as the Bobcats will have to deal with Gerald Wallace’s rib injury and a tough back-to-back game against the Trailblazers on Wednesday night.

11.  Some postgame notes/links: The DJ Augustin injury has necessitated a quieting of all the Raymond Felton trade rumors; meanwhile Felton’s strong, steady recent play has had many Bobcats fans lamenting the seemingly inevitable trade.  But wait, Bonnell is now estimating that the probability Felton gets traded has dropped to about 30%.  I’m an unabashed Raymond Felton apologist, but not moving him while we can get something back for him would be a huge mistake.  Augustin is the future at PG, so we may as well hand over the keys now.  There are several teams that could use a PG like Felton down the stretch, so it would seem that we could get an interesting player or pick in exchange for him.  Meanwhile, ESPN’s Chad Ford estimates the chances of a Felton trade at 75%.