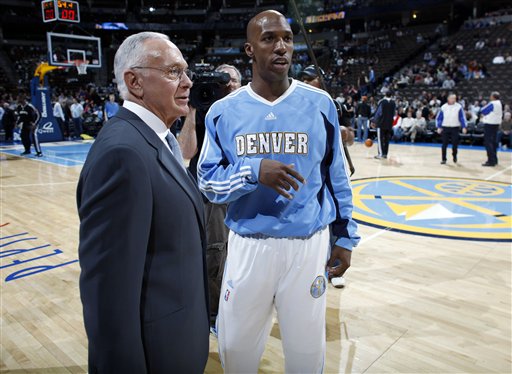 2.  Don’t let the 11 point final margin fool you — this one wasn’t anywhere near that close.  In the fourth game of a five game Western Conference road trip, in the thin Denver air, and without Gerald Wallace and DJ Augustin, the Cats hardly stood a chance.  The opening minutes of the game aside, the Nugs led this one throughout, and the Bobcats never seriously threatened in the second half.

3.  This was Carmelo Anthony’s first game back after missing the last 10 games due to a broken bone in his hand.  He certainly had a nice game, finishing with 19 points (9-11 FT), but it was a quiet 19.  He seemed content to pace himself and chip away gradually at the rust of missing 3 weeks of action.

The two guys that really beat us were Nene and Linas Kleiza.  Nene finished with a loud 22 points (on 10-11 FG!) and 12 rebounds.  He finished with a +17 +/- in 31 borderline dominant minutes.  The guy is a menace, possessing a great combination of strength and finesse.  He’s big enough to hold his own on the block, but really excels at slipping away from his man, rolling to the basket and catching interior passes.  Once he catches the pass, he has a nice knack for staying balanced and finishing strong with dunk.  He does this a lot, as evidenced by his league leading 62% field goal percentage.

Meanwhile, Linas Kleiza finished with 21 points in just 29 minutes off the bench (7-11 FG, 3-7 3PT, 4-4 FT).  This guys has a very well rounded game, and showed it all off last night.  He had several strong drives to the basket, but also shot well from outside.

The fact that these two guys led the way for the Nugs shows a) how loaded they are, at least offensively, and b) how beat up the Bobcats are right now.  Though Carmelo, Chauncey, K-Mart and J.R. Smith were relatively quiet, I had the sense that any one of them could have stepped up to overpower the Cats if Nene/Kleiza hadn’t.

4.  The only individual performance worth lauding was Raja Bell’s.  Raja finished with 27 points (9-14 FG, 3-5 3 PT, 6-7 FT), 5 rebounds and 4 assists.  For a couple of stretches in the game when he was feeling it, Bell went into straight gunner mode — it seemed like he shot a lot more than 14 times.  Thank goodness he did, though, as it was all anyone could do to keep the Cats from getting blown out.  Bell finished with a -3 +/-, which was by far the best mark of any of the starters.

5.  The rest of the Cats were punchless.  Raymond Felton shot 3-10 from the field, garnering a -17 +/-.  Before the game, George Karl apparently was indignant that the Bobcats were considering trading Felton.  Here’s exhibits A and B, George: a) the Bobcats books for the next few years, and b) some advanced Hollinger statistics showing that Felton isn’t even in the top 30 point guards in the league.

Adam Morrison played a foul-filled 17 minutes.  He looks more and more lost every game he plays.  I have to believe that these starts he gets in Gerald Wallace’s absence are the last real chance that he’s going to get with the Bobcats.  Picking up the team option for the ’09-’10 season (at $5 million) this past summer is beginning to look like a(nother) big miscalculation by Jordan and Higgins.  Morrison needs a change of scenery, bigtime — maybe to the Euroleague.

And this was another game in which Emeka Okafor’s disturbing lack of motor was really exposed.  Pitted against the aggressive, efficient, dunking machine Nene, Okafor shrunk in the face of the challenge.  He finished with 10 points and 5 rebounds in just 21 minutes.  Maybe he wanted to slink back to the bench to read this.

If Okafor was just a bit bigger and a notch or two more talented, the coolnes with which he plays the game would probably be a huge asset.  But at this level, when his counterpart every night is usually either bigger than him, or more fluid and athletic than him, a degree of nastiness and passion would go a long way.  Alas…

6.  The Bobcats will wrap up this road trip on Monday in Utah.  A win against a similarly depleted Jazz squad (no Boozer or Kirilenko) would really salvage the road trip at 2-3.  It’s a 9 PM ET start.