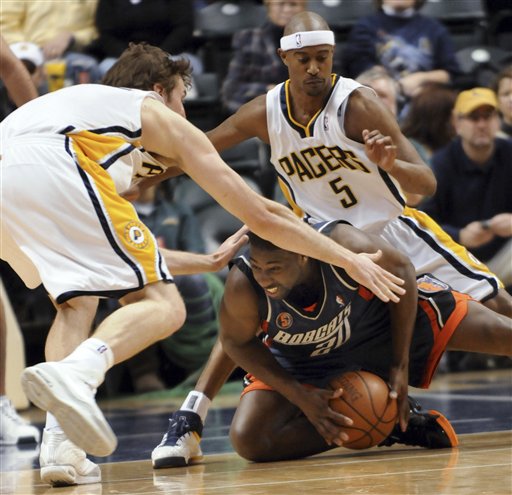 1.  The Bobcats start their five-game road trip with a loss to Indiana tonight 98-93.  AP story here, box score here.  Cats drop to 18-26.  It would have been really nice to grab this one — on paper it was easily the most winnable game of the trip.  Things get way more difficult from here on out.

2.  This was the worst game Charlotte has played in a while.  They came out flat and stayed flat, never found a consistent offensive option, got outrebounded, and missed too many free throws.  Despite all that, the Cats got to within 3 points several different times in the fourth quarter.

The last minute of the game serves as a pretty good microcosm for the whole 48 minutes: down 96-93 with a minute left, the Bobcats force a Troy Murphy three pointer, which he misses.  Good, right?  Nope.  TJ Ford grabbed the offensive rebound, allowing the Pacers to salt away another 15-20 seconds.  They ended up getting one Jeff Foster free throw on that possession to push the lead to four, 97-93.  On the ensuing Bobcats possession, Diaw got fouled on a drive with 30 seconds left, but then missed both free throws to effectively end any chance of the Cats coming back.  And if “effectively” ending it isn’t enough for you, on the next Bobcats possession Emeka Okafor had his dunk attempt blocked by Jeff Foster to really hammer home the point.

3.  No bench again tonight.  Diop saw his most extended action since joining the Cats (17 minutes) and responded with 8 points on 4-5 FG and 4 rebounds, but also garnered a -11 +/-.  Sean Singletary had a -14 +/- in his 11 unproductive minutes.  The Pacers, meanwhile, got 13 points/7 assists from TJ Ford, and 11 points/5 OREBS/3 steals from Marquis Daniels off their bench.  Perhaps most inexplicably, Stephen Graham just beasted the Bobcats reserves for a stretch in the second quarter (the only quarter the Pacers definitively won), and finished the game with 9 points on 4-5 FG and 3 rebounds in 12 minutes for a +7 +/-.

4.  Danny Granger was the star for the Pacers, going for a game high 27 points.  He wasn’t especially impressive tonight, needing 25 shots to get those 27 points, but with Troy Murphy and Jeff Foster controlling the boards, it was enough.  Murphy finished with 14 boards (1 offensive) but Foster was the real killer, with 10 offensive boards (!) out of 13 total.  I know that guy has a real knack for OREBs, but 10?

5.  It’s not really worth talking about any of the Bobcats’ individual performances or numbers tonight.  The most important numbers are these: the Pacers outrebounded the Bobcats overall 52-37, and 19-10 on the offensive glass.

And the Pacers outshot the Bobcats at the line 19-23 (82.6%) to 18-30 (60%).  Emeka Okafor was the primary offender, going 4-11 from the stripe.  So despite lackluster games from the Bobcats starting five and a no-show from the bench, with just a couple of extra rebounds and a few more free throws, the outcome could have been totally different.

6.  At least Cats fans got some good news today in that the Bucks, one of the teams we’d need to pass in the standings to sneak into the playoffs, lost their best player for the rest of the season this weekend.  Tough break for the Bucks and Redd, who is one of the league’s most understated stars.

7.  As noted previously, this was the first game of a 5 game road trip for the Cats: next game is Tuesday night at the Lakers, 10:30 PM ET start.  That’s followed Wednesday night at Portland (10 PM ET), Friday night at Denver (9 PM ET), then the following Monday night at Utah (9 PM ET).