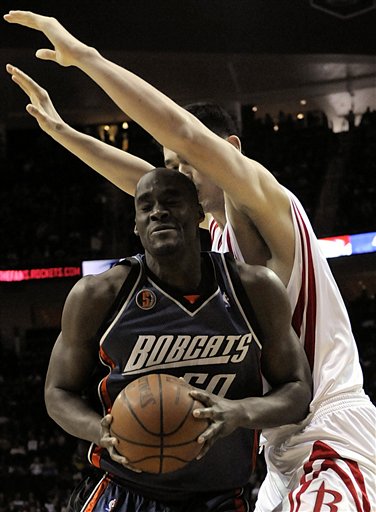 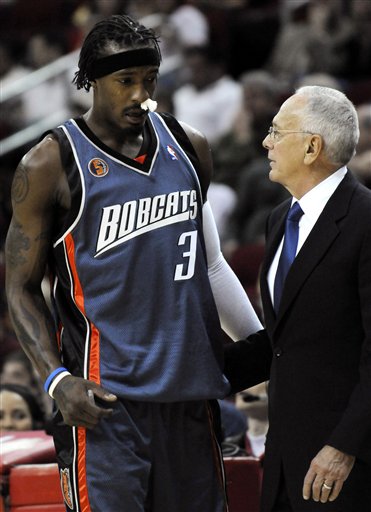 1.  Inauspicious start to the road trip on Sunday afternoon, as the Cats suffer a blowout loss to the Houston Rockets, 99-78.  AP story here, box score here.  The Bobcats fall to 22-34 and have now fallen 4.5 games back from the 8th playoff spot.

2.  This one was a two point game at halftime (44-42), but the Rockets absolutely dominated in the third quarter and, to a lesser extent, the fourth.  The two pictures above are apropos of the tone of this game.  The Rockets were rougher and tougher, knocking the Bobcats around and preventing anyone from getting their offense going.  The Cats only managed 14 points in that decisive third quarter.

3.  For the second straight game, the Cats had more turnovers (21) than assists (15).  The shooting was terrible: 36% FG and 21% 3PT.  No one was any more egregious than anyone else.  Check the box score, everyone’s stats are equally mundane.

4.  The only thing that does stand out in the box score for the Bobcats is Gerald Wallace’s -24 +/-.  Wallace managed a double-double with 11 and 10, but only took 8 shots, had four turnovers and fouled out after drawing a personal and a tech with a few minutes left in the game.  Oh, and the aforementioned brutal +/-.

Except for the Indiana game, Gerald has not been the same since coming back from his busted rib and partially collapsed lung.  Let’s hope he gets his groove back on the road trip.

5.  The Rockets look pretty good without McGrady.  Artest was on tonight; he led the way for them with 26 points on 9-15 FG and 5-7 3PT as the Bobcats again struggled to defend the perimeter after devoting extra defensive attention to the opposition’s low post threat (Yao, in tonight’s case).

So anyways, the Rockets were plenty good enough to beat the Bobcats tonight, but when they hit the playoffs they’re going to need a bit more offense.  Artest won’t go 5-7 from three-point land on a regular basis; Von Wafer isn’t striking fear in the hearts of opposing 2 guards.

6.  One minor quibble with the coaching down the stretch.  When the Bobcats were down by 20 points with under seven minutes left, why were Gerald Wallace, Boris Diaw, and Emeka Okafor still in the game?

I can buy Okafor, as he is a Houston native and Brown is committed to these sentimental college coaching manuevers like “the homecoming game”.

But since he has stubbornly resisted sending Alexis Ajinca to the D-League, you’d think he’d be on the lookout for opportunites to get him some meaningful experience playing American-style basketball in game situations.  Right?  Nope, another DNP-CD for Freedom Fries while Gerald, Boris and Emeka play out garbage time.

7.  That’s all I got tonight, folks.  Hopefully we’ll have something positive to talk about after the next game.