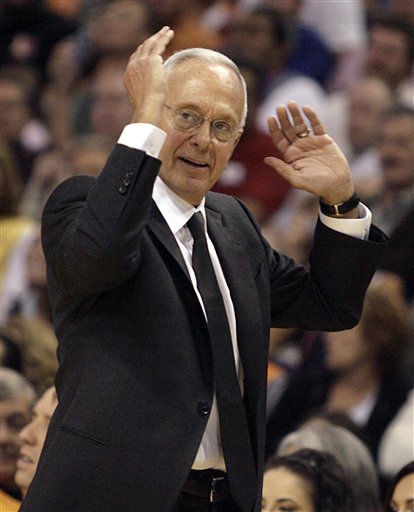 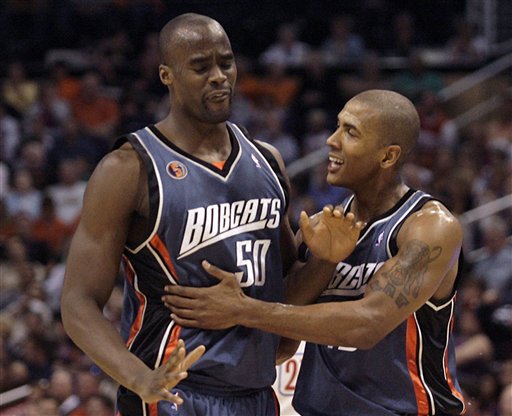 1. The Bobcats lose their third straight tonight, dropping a 112-102 decision to the Suns.  AP story here, box score here.  Bobcats fall to 22-35 overall and 0-2 on the Western Conference road trip.

2.  A particularly bad minute in the third quarter doomed the Bobcats in this one.

After Radmanovic hit threes on two straight possessions to pull the Bobcats to within 7 (at 63-70), Shaq had a three-point play.  Next time down the court Radman threw a bad pass that led to a Barbosa layup.  On the next possession, Felton turned it over, then committed a “clear path” foul on J-Rich, who hit both free throws.  Possession goes back to Phoenix after the “clear path” foul, and J-Rich hits again, drawing a foul.  The Bobcats bench draws a technical foul complaining about it (or maybe they were still complaining about the “clear path” call).  Nash hits the technical free throw; then J-Rich hits his free throw to complete a three-point play.

A six point possession to finish off an 11-0 run.  Ouch.  The deficit went from 7 to 18 in under a minute and the Bobcats never recovered.

3.  The Cats did cut the lead down to 5 (at 91-96) early in the fourth, but the Steve Nash responded with a three.  A minute later, a curious call put a bunch of nails in the coffin.  J-Rich missed a three, and then barely came down on the foot of Gerald Wallace, who had run out to contest.  J-Rich fell backwards lightly and drew the call on Gerald.  J-Rich hit all three free throws to push the lead out to 8 with under five minutes left, and Gerald fouled out on the play.

A few minutes before, Steve Nash rolled an ankle landing on a Bobcats’ foot after a jumper and had to leave to get retaped; one has to wonder if the officials were hypervigilant about that kind of play from then on, resulting in the call on Gerald — because it’s not a call that’s routinely made.

4.  This team has become a real chore to watch in the past week.  No one is playing well, and we’ve faced some good teams that have really exposed us.  Our offensive execution has been a major concern; it was a bit better tonight, but not dramatically so.  After having more turnovers than assists for the past two games, the Cats (barely) straightened that out tonight (20 assists vs. 17 turnovers).

5.  In his postgame comments, Larry Brown lamented the Bobcats lack of a star offensive player who gets calls and demands double teams.  Intersting, as Brown has undoubtedly been behind the personnel moves that have garnered a roster full of 5-10 million dollar role players (Diaw, Diop and Radmanovic) who are all signed for several more years.  Those contracts essentially preclude the team from making any kind of acquisition of such a star offensive player.

7.  Emeka Okafor continues to play the role of “The Incredible Shrinking $72 Million Dollar Man” with a limp game of 8 points (2-9 FG, 4-8 FT), 6 rebounds and no blocks.  Granted, he was playing Shaq, and he’s also had to face Dwight Howard (twice) and Yao Ming in the last week, but would it be too much to ask to show some fire and/or leadership?  Or to rise to the challenge of playing the premier centers in the league?

8.  DJ Augustin continues to disappoint with lackluster play since returning from his abdominal strain.  Is he still hurting from that; or has he just hit the wall?  Either way, only four points in 18 minutes tonight.

9.  The Bobcats will try to get back on track with a match Wednesday night (10 PM ET) against one of the worst teams in the league, the Kings.  This will be no gimme, though, as the Bobcats are on the road, slumping, and on the second night of a back-to-back.