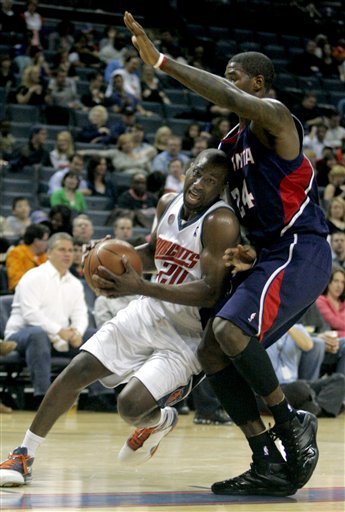 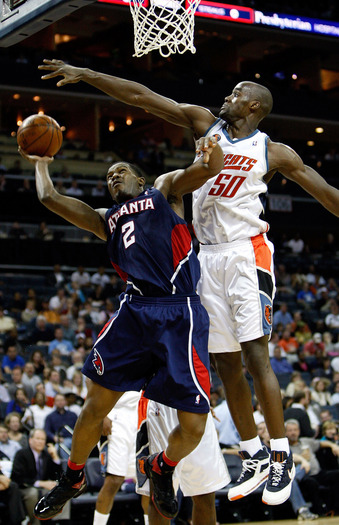 2.  This was another well-rounded effort, with all five starters playing big minutes and getting to double figures.  Larry Brown has tightened his rotation significantly, with only DJ, Radman and Diop getting action off the bench.  For the game the Cats shot 54%.  They outrebounded the Hawks 40-31, and had 29 assists vs. 10 turnovers.

3.  The Cats opened the game with their best quarter of the season, scoring 36 points on 17-21 FG (81%!).  They looked really sharp in taking advantage of the Hawks lack of interior defense, tallying assists on 14 of 17 field goals, most of them layups.  That scintillating quarter provided a 15 point lead that proved to be just enough cushion for the rest of the game.

The Hawks gradually chipped away at the lead and actually pulled to within two on a Mo Evans tip with 8 minutes left.  However, Radmanovic answered with a high-arching well defended 12-footer on the next possession, followed by Diop getting a tip-in of his own to extend the lead back out to a more comfortable six.

Down the stretch, Raymond Felton had two huge layups (the second one drew a foul on Horford for a three-point play) to put the game away.

4.  After posting a decent first half line of 13 points (6-10 FG), 4 rebounds and 2 blocks, Josh Smith was benched for the second half.  He apparently got into a shouting match with coach Mike Woodson on the way to the locker room for halftime.  No definitive word yet on what the dispute was over, but I have to imagine it had something to do with the crappy defense the Hawks were playing.  Whatever it wasy, Smith’s absence in the second half was certainly an advantage for the Cats.

Raja Bell looked like he was trying to force a similar performance out of his bad shoulder as he managed Wednesday night; didn’t happen as he finished with 5-13 FG (1-6 3PT).  However, he played great defense on Joe Johnson, who never got it going tonight.

Gana Diop deserves special mention again.  In 18 minutes off the bench he had 6 points (3-5 FG) and 7 rebounds (4 offensive).  Just as he did on Wednesday night, Diop was huge spelling Okafor in the fourth quarter, when the opponent was making a mad rush to get back in the game.

6.  I can’t help but think back to the last time we faced the Hawks — exactly a month ago.  Gerald Wallace was out with a lung, and Adam Morrison was subbing for him.  Marvin Williams abused Morrison to the tune of 29 points on 18-20 FTs and the Hawks pulled out a win.  Not coincidentally, Morrison was traded less than 48 hours later.

Now we have a much more functional Vladimir Radmanovic in the Morrison role, and Gerald Wallace back in midseason form — big difference.  Needless to say, Marvin Williams had a much more pedestrian 13 points on 5-15 FG tonight.

7.  The crowd started off disappointingly small for a Friday night, but by the end of the first quarter had filled in a bit to normal “Friday night” levels.  So far, no bump that I could tell from Playoff Mania (or Bojangles All-You-Can-Eat night).  On the other hand, the crowd that was there seemed to be well aware that the Cats are playing well and in the thick of the playoff hunt.

8.  So the NBA scoreboard for the night shows some positive results for the Cats.  Chicago beat Milwaukee to take sole possession of the 8th spot.  This works well as we hold the tiebreaker over the Bulls.  And the Magic beat the Nets, who fall back into a tie with the Cats just 1.5 games back of Chicago.

9.  The Bobcats are off to New York to face D’Antoni’s Knicks on Saturday night (7:30 PM ET).  Elsewhere, Milwaukee will be hosting Golden State in the only other game of consequence to the Cats.  So, uh, go Warriors!