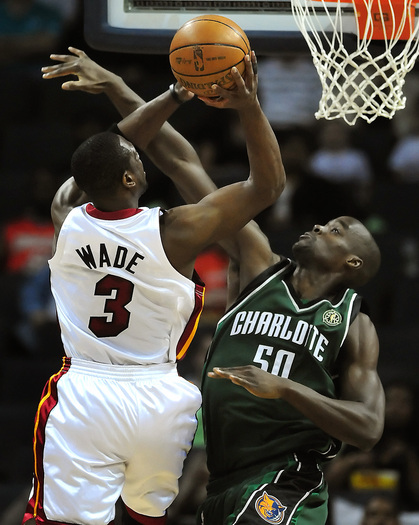 2.  As the sloshed, 45-year-old Dwyane Wade fanboy one section over chanted all night, “it’s a slow death” being a Bobcats fan right now.  With every loss in the past few weeks, we’ve looked at the schedule and said, “well, we can still go X-and-X from here out and make it.  And we’re still there: if we run the table and win all six remaining games, we probably still have a shot at the playoffs.  That would include wins at Detroit and Chicago (our direct competitors for the last spot) and would get us to 40 wins.

Let’s face reality, though — it ain’t gonna happen.  But until the day when we’re mathematically eliminated, it’s going to continue to be a slow death.

3.  The crowd was announced as a sellout again, but again there were plenty of empty seats.  Still a great crowd, though.  And we did get to experience the aforementioned Green Night.  Everyone got a free Sprite/Bobcats t-shirt in a colorway that is best described as: faded puke lime green.  And early-comers/season-ticket holders got reusable Harris-Teeter grocery bags.

Of course the big draw was the green jerseys — not bad, actually.  I’m far from a uni-traditionalist, so I actually like alternate/special jerseys in most cases.  But pardon me for asking: how is it “green” to produce a whole new batch of jerseys and thousands of giveaway t-shirts at the end of the season?  I have to assume the jerseys will be auctioned off with proceeds benefitting some green charity, right?

4.  On to the actual game.  Stop me if you’ve heard this one before: the Cats come out of the gates strong, defending well, keeping the opponent’s star in check.  They move the ball well and shoot a high percentage; only to falter, go cold and move away from what was working in the first place later on.  The game is tight throughout the second half; but down the stretch, when the good teams in the league turn everything up a notch and stars rise to the occasion, the Bobcats wither, unable to score when it counts.

I feel like I’ve written that numerous times this year, and thought it countless times over the past five seasons.  And it’s OK, it’s to be expected.  The Bobcats haven’t done much to get respect from the officials, so we’re never going to get the benefit of the doubt on close calls.  We’ll rarely shoot more free throws than the opponents in an important game.  And we don’t have anything close to a superstar who would be a force on the offensive end — someone the opponents have to double-team, someone who can get to the rim, draw a foul, create his own shot and make it reliably.

5.  So while I know that the Bobcats don’t have that star player who can take the game in his hands down the stretch, I’m going to keep beating the drum that there has to be a better option than Raymond Felton.  With 30 seconds left, down three, everyone standing, the Cats have the ball.  Of course, it’s in Raymond’s hands.  No one else appears to be doing much to get open or run a play — if they were, the Heat foiled it pretty easily.  Felton drives, overpenetrates, and has to try a difficult layup.  It misses badly.  Of course, there is contact, and of course, everyone cries for a foul.  No such call is made.  Heat rebound, game pretty much over.

Felton is like the anti-Dwayne Wade in this respect.  Something about the symphony of bodies flying around near the basket when Felton drives looks different enough to the refs that they swallow their whistle instead of blowing it.  When penetrating, he seems to do just a bit too much to avoid the contact.  So after doing just a bit too much, he’s left with an impossible, contorted layup attempt.

In part, it’s because Felton’s not as an explosive leaper as Wade, and maybe isn’t quite as strong either.  But most of all, it’s just a knack that Wade has that Felton doesn’t.  There’s something innate that allows Wade to accept (or initiate) just the right amount of contact in just the right way, while still allowing himself enough control to still get a reasonable shot attempt up.

Needing a three, Larry Brown inexplicably leaves this lineup on the floor: DJ, Raymond, Wallace, Diaw and Okafor.  Now Raja Bell was out after straining his calf earlier in the game, but is there any reason not to have Radmanovic or even Cartier Martin out there?  When you have to shoot a three, don’t you want as many shooters out there as possible?  I can understand Okafor being there — maybe he gets to bat a rebound out for another attempt at a three; but seriously, why is Gerald out there?  Or Felton, for that matter?  Those two are shooting 29% and 28%, respectively, on threes this year.

Anyways, the ball ends up in Raymond’s hands (it’s almost as if opponents want him to be the shooter in these situations, huh?  Ya don’t think?…. Nah…) and he has to fire up the three.  It’s contested well, but still a decent look.  Brick, game over.

7.  For the Heat, D-Wade was great — kind of on a consistent, slow burn all night until the fourth quarter, when he really turned it on.  Raja Bell checked him in the first half, but went out just minutes into the third quarter with a calf strain.  That left Cartier Martin to guard Wade for the entire third quarter.  Cartier did a decent job, holding Wade to just five points in that stretch.  But he was getting a lot of help from teammates, as Wade’s 5 assists during the third quarter would attest to.  Raymond also did a decent job with the impossible task of guarding Wade in the fourth quarter — Wade’s simply too good.

Michael Beasley was pretty impressive in 27 minutes, going 7-9 for 14 smooth points with 4 rebounds.  If he ever gets a motor and commits to playing defense, the sky’s the limit.  If not, hello Derrick Coleman 2.0.

Beasley and Jermaine O’Neal both went out with turned ankles at different points in the second half — both returned eventually.  Udonis Haslem busted his shooting hand on the backboard or rim playing defense and needed stitches.  Reports are he’ll probably shut it down for the rest of the season to let the gash heal.

8.  For the Cats, Gerald Wallace had a nice game: 21 points (8-12 FG, 4-4 FT), 8 rebounds and 2 blocks.  One of those blocks was on a Dwayne Wade dunk attempt — just amazing, and had the Cats won the game I’d probably write a whole paragraph on it.  But check the GameFlow and it will show that Wallace accumulated all of those stats in the first three quarters.  Despite playing all 12 minutes of the fourth, he registered only 3 fouls and 2 turnovers in the quarter.  Not a single point, rebound, assist or block.  This happens far too often — we have to find some way to keep Gerald involved in the fourth quarter.

Bell is possibly done for the year with a bad calf strain.  He walked off gingerly with assistance from the Human Crutch, Sean May; postgame, Larry Brown said that Raja said he felt it pop, which usually means a pretty significant muscle tear.

Bad game for Radmanovic: I asked earlier why he wasn’t out there to close the game when we needed a three, and the best answer is that he had performed miserably thus far in the game.  0-6 in 17 minutes, 0-2 from three.