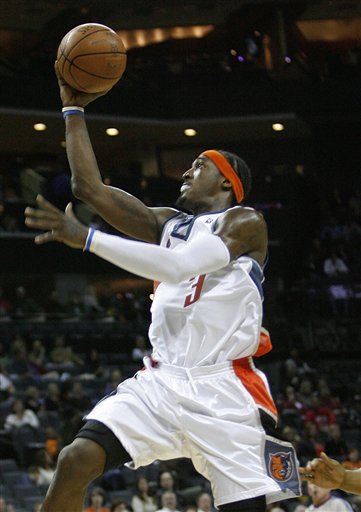 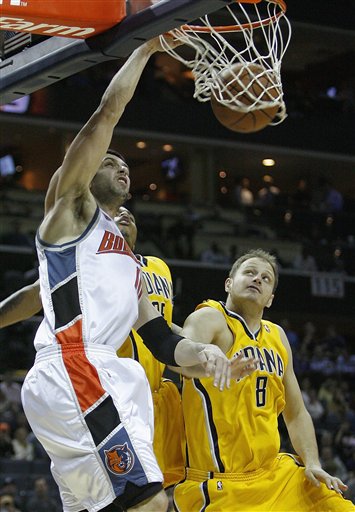 2.  The Pacers were already playing without important cogs Mike Dunleavy and Jeff Foster due to injuries, then lost All-Star Danny Granger to a sprained foot early in the second quarter.  That, combined with center Roy Hibbert getting in early foul trouble, led to some strange lineups for the Pacers.

First of all, I was subjected to 18 minutes of Rasho Nesterovic — never pretty for Pacers fans, as evidenced by the pic above of Radman dunking on him.

But mostly, the Pacers went small.  Real small.  Like, there was a stretch when Travis Diener, TJ Ford, and Jarrett Jack were on the floor together.  (Gave me bad flashbacks to the time when LB put Singletary, DJ and Felton out there at the same time.)  Rounding out the “3 PG” lineup were Marquis Daniels and Troy Murphy.  For some of the fourth quarter, Maceo Baston was essentially playing “center” for the Pacers.

The Bobcats mostly obliged with smallball, as Okafor only got 21 minutes, Diop 11 and Howard 1 — Radmanovic was the biggest guy on the court for the Bobcats for a time.  I would have liked to see what Okafor could have done with more minutes against Nesterovic and Murphy, but whatever…

3.  So despite the Pacers depleted squad and odd lineups, the Bobcats never definitively put the Pacers away.  It was kind of disappointing, really, but the season is a marathon and all.  It’s just that they could have been a lot sharper.

4.  Granger’s injury was awful quiet.  He started the game pretty hot, going 4-9 with 2 threes in 10 minutes, then left early in the second quarter.  Postgame he apparently said he felt something pop in his foot upon landing after a shot attempt and came out next break.  I certainly don’t remember the injury, and didn’t even realize he was gone until halfway through the third quarter when the Pacers were struggling to score.

Without him or Dunleavy, the Pacers were really punchless.  Here’s hoping the injury isn’t too bad.  (Then again, it’s almost Tanking Time for teams not in the playoff race — Taylor Griffin, anyone?)

Anyone notice that Crash is shooting nearly 80% from the line this year?  Look at the improvement over his career — just a few years ago he was a 61% free throw shooter.  Pretty incredible, especially because it’s the same awkward, ugly, flat shot he’s always taken.  It’s just money this year.

7.  Radmanovic was great off the bench again, with 15 points (6-12 FG, 2-4 3PT), 4 rebounds, 2 assists, 2 steals and 2 blocks.  Watching him succeed in Morrison’s former role makes me fear for Adam’s basketball career.  Seriously, Radman was buried on the Lakers bench (albeit largely because of a personality conflict with the Zenmaster), but has stepped right in and played well.  So the opportunities were there for Morrison in this system; he was just unable to take advantage.

Unless Morrison’s ACL injuries is one of those ones that really takes 2 years to fully come back from, I won’t be surprised if he’s out of the league in a couple of years.  Maybe even sooner…

8.  DJ has not really played well since he returned from his abdominal strain.  He’s seemed tentative and a step slow.  He didn’t do much tonight, but somehow ended the game with a team-best +10 +/-.

9.  So after turning down the Blazers offer for Gerald Wallace on Wednesday afternoon, it’s looking like the Bobcats won’t be making a deal before Thursday’s deadline.  I still think there’s a chance that a team like Portland, Miami, Dallas or Orlando — looking to shore up their PG spot for the playoffs — will step up with a decent offer for Felton.  Especially Orlando, who got pasted by Chris Paul tonight, and have been unable to run many high pick-and-rolls with the likes of Anthony Johnson and Tyronn Lue at PG.

And the Bulls trade for John Salmons and Brad Miller is good news for the Bobcats, in the following indirect and convoluted way: I think it puts them at the top of the list for snagging that 8th playoff spot in the East (that is, if Milwaukee ever falls apart like everyone’s been waiting for them to do).  And if the Bulls get in that 8th spot, then the Bobcats don’t.  Which means we actually get to keep our draft pick this year.  Which we need.  Badly.  Even though this draft class isn’t very exciting.

10.  Next game is a biggie: Friday night at the Cable Box, hosting Supes and the Orlando Magic.  Hopefully we can pay them back for the one they stole on their floor Tuesday night.