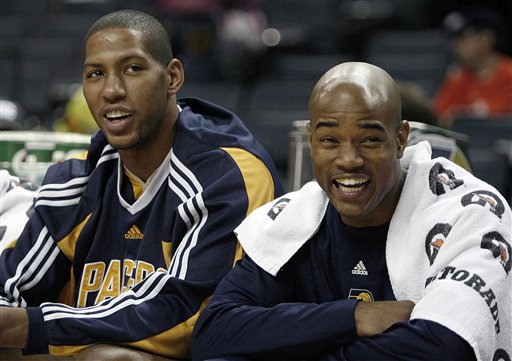 1.  Wow, that was brutal.  The Bobcats drop a must-win to the Pacers on Saturday night at the Cable Box, and it wasn’t even close: 108-83.  AP story here, box score here, PopcornMachine.net GameFlow here.  The Cats fall to 31-39.

2.  A quick apology for the lack of a post on the Raptors game from Friday night.  In retrospect, I should have watched that one live on TV, then skipped the Pacers game.

3.  It was ugly.  The first quarter and a half, when most people in the arena were more focused on watching the Carolina score on their cellphones, wasn’t too bad.  Raja Bell hit a three with 5:45 left in the second to give the Cats a 36-34 lead, but Danny Granger responded with two straight three-pointers of his own and the Pacers never looked back.

The Bobcats trailed 53-45 at the half; then came one of the weakest quarters I’ve ever seen.  Pretty much everything went wrong as the Cats got dominated, 33-9 in the third quarter.  While they couldn’t get any offense going on their own end (airballed jumpers, bricked free throws, turnovers, 24 second violations, you name it), the Bobcats allowed the Pacers to get whatever they wanted.  And when Granger, Jack or Murphy weren’t getting layups, they were nailing seemingly every jumper they took.

The badness continued into the fourth quarter, when the Pacers briefly took a 34 point lead (92-58).  At this point, the boo birds were out, and rightfully so.  The Cats were lead-footed, off-target and completely overwhelmed.  It was mostly the starters that were playing during the third quarter, and I’m still at a loss as to why Larry Brown didn’t pull them earlier than he did.

Going into the second night of a back-to-back, and playing their fourth game in six nights, Larry Brown was concerned enough about the possibility of fatigue to mention it during pregame media availability.  But in the third quarter, when everyone in the building could see that the starters were gassed and the Pacers were blowing the game open, the reserves sat until it was way too late.

4.  From the Pacers’ persepective, the story of the game was Jarret Jack.  One night after getting benched and sent to the locker room in the third quarter for arguing with teammate TJ Ford in the team’s fifth straight loss, Jack scored 31 points on an insane 13-14 FG in 32 minutes for a +29 +/-.  Jack got to relax with Granger and Murphy on the bench for the entirety of the fourth quarter, while TJ Ford played garbage time with Travis Diener and Rasho Nesterovic.

5.  For the Bobcats, the story has to be the blown chance to make some progress in the fight for the 8th playoff spot.  With the Bulls and Bucks both playing tough games Saturday night (hosting the Lakers and Blazer, respectively), the Cats just had to take care of business against a Pacers team that had lost five in a row and was showing signs of self-destruction.

The Bulls and Bucks both cooperated by losing their difficult games.  For the Bobcats to have come with such a weak effort given what was on the line (and with a decent Saturday night home crowd in the building) is really disappointing.

7.  The Cats get a few days off to rest and heal up.  Next game is Wednesday night at Washington.