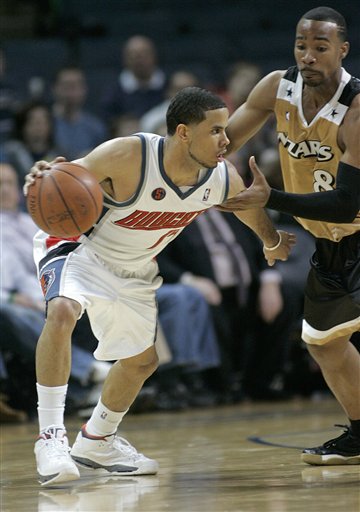 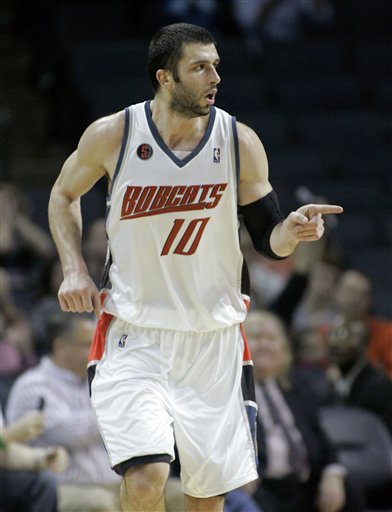 2.  Larry Brown went with their billionth different starting lineup on the year: DJ, Raymond, Radmanovich, DIaw and Okafor.  Wallace, Bell and Howard are still out with injuries.  Cartier Martin was first off the bench and played pretty well.  Sean May again logged a few minutes in the first half.

3.  Antawn Jamison started the game off quickly on a personal 7-4 run, but the Bobcats took the lead a minute later on a Felton layup and never trailed again.  The Cats handily won each of the first three quarters.  The Wizards made a little push in the fourth and cut the lead to six with a few minutes left, but DJ and Radman responded and closed the game out  Overall, the Cats shot 50% from the field and were able to get pretty much whatever the wanted on the offensive end.

This one was so routine that Rufus spent much of the second half in the stands trying to freak people out from behind with a fake spider on the end of a fishing rod.

DJ Augustin was the high scorer with 24 points (7-12 FG, 4-7 3PT, 6-6 FT), 5 rebounds, 4 assists (no turnovers) and a +13 +/-.  I continue to be pleasantly surprised by his ability to hit the NBA three.  He would be totally forgiven for taking a year or two to develop reliable NBA three-point range, especially as a smaller guy, but he’s already pretty deadly at 41%.

Raymond Felton had a near triple double with 15 points/9 assists/8 rebounds and 5 steals.  And I hate to nitpick, folks, but here is why we’re better off letting DJ take the reins: Felton shot 7-12 FG (1-3 3PT) and had 4 turnovers.   And it’s not just one game.  Check out Hollinger’s True Shooting Percentage numbers, which take into account free throw and three-point shooting: DJ’s at 56.4%, good enough for 14th best among PGs.  Scroll down to find Felton at 47.2%, 56th best amongst his fellow PGs.

Emeka Okafor played very well, with 16 points (4-7 FG, 8-10 FT) and 13 rebounds.  Those 7 FGAs don’t look like enough, but realize that those 10 FTs really represent another 5 shots.  Okafor was working hard, and his teammates were finding him.

And Radman had another solid game.  He started slow and then heated up as the game went on, just like the other night.  21 points on 8-14 FG and 5-10 3PT.  I was being judicious in the recap of the Clippers game when I called him merely “an upgrade” over Morrison.  Radman is a better shooter, a better athlete, and a better slasher/driver than Morrison.  Most importantly, he’s not terrified out there.

5.  Diaw had an interesting line: 14 points, 5 rebounds, 7 assists, 7 blocks and 7 turnovers.  Yes, seven blocks and seven turnovers.  The former is intersesting because I don’t remember one of those seven blocks — seriously, those were the most quiet seven blocks ever; the latter is worth commenting on because, for all the assists he gets, he throws a lot of risky/bad passes, too.  I think his turnover numbers will naturally fall a little bit as he and his teammates get more accustomed to each other; how much remains to be seen.

6.  So the Cats go into the break on a high note.  No one’s participating in any of the All-Star festivities, which sucks; here’s hoping everyone comes back from the break healthy and well-rested.  First game back is next Tuesday at Orlando.  And let’s keep those Raymond Felton trade rumors flying! (My money’s on Orlando or Dallas.)