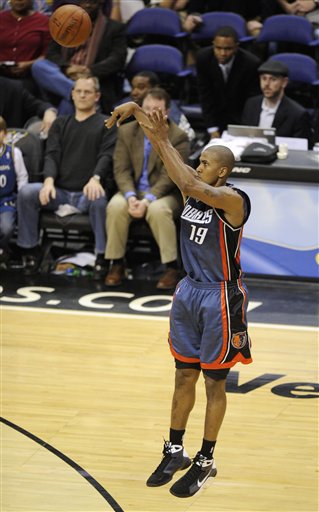 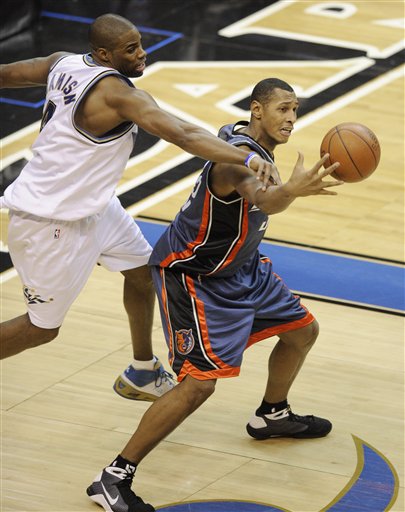 2.  The Bobcats essentially did to the Wizards what most good teams usually do to the Bobcats; that is, the Cats slow-played the first two and a half quarters or so, weathered injuries to and off nights from some of their key guys, and eventually did just enough to scoot by an inferior squad in the fourth quarter.

Difference is, when good teams do this to the Bobcats, you get the feeling that it was part of the plan — to save some energy — and the opponent was always in control.  But the Bobcats tonight were more fortunate than anything — fortunate that the Wizards folded down the stretch.

Overall, Raja Bell and Boris Diaw provided some steady play and leadership tonight, leading the way with 19 and 18 points, respectively.

4.  Bad first quarter, as the Bobcats couldn’t get anything consistent going on the offensive end and gave up easy baskets to a variety of Wizards — leading to a 31-23 deficit.  The Bobcats played the last few minutes of the quarter with the dinosaur backcourt of Howard and Mohammed.  The Wizards raw-as-hell rookie center Javale McGee punctuated the quarter with a humiliating coast-to-coast into a ridonculous windmill jam.

5.  The second and third quarters went like this: Wizards regress to their mean, allowing the Bobcats to chip away at the lead.  With Gerald Wallace completely absent and Raymond Felton missing time getting his ankle retaped after rolling it early in the third, things didn’t look good.  But when Raymond returned, the Cats went on a run with significant contributions from Juwan Howard (12 points on 6-9 FG), Adam Morrison (11 points on 4-6 FG) and Shannon Brown (+12 tonight!) to pull within one by the end of the third quarter.

6.  The Bobcats took the lead early in the fourth quarter, then went back and forth the rest of the way.  With the score tied at 85 with just a few minutes left, Shannon Brown hit the shot of the night.  With the shot clock trickling down, Brown rose up and drained a contested three from the wing to put the Bobcats up for good.  Still, the Wiz had two chances to win with the score 90-89 and under a minute left: Mike James missed a driving layup on the first chance, then Nick Young missed a jumper.  Felton grabbed the rebound, took a foul, and hit his free throws to seal the deal.

7.  The biggest subplot to the game (which goes strangely unmentioned in the AP story) was the lack of Gerald Wallace.  Take a look at this line: 20 minutes, 0-0 FG, 5 rebounds and 1 assist.  That’s it.  Wallace didn’t play for a large swath of the first quarter, and was then benched for the entire fourth quarter.  When asked about it post-game, Larry Brown blamed it on Crash’s lack of energy.

Let’s hope we never see a line like that from Gerald again.

8.  Another big story is that DJ Augustin only played four minutes in the first half after apparently aggravating some kind of abdominal strain.  Let’s hope that’s all it is, though, as Larry Brown also ominously slipped “sports hernia” into his postgame comments.  With Matt Carroll inactive tonight with an Achilles, and Raymond’s sprained ankle sure to be nagging him in the coming days, we’re suddenly kinda thin at guard.  Hello, Sean Singletary and Shannon Brown!

9. One last note, on Emeka Okafor: it’s one (of many) things that drives me crazy about him.  Okafor was outplayed by both Andray Blatche and Javale McGee tonight, especially in the first half.  But instead of showing some passion and ratcheting up the effort and intensity, Okafor’s expression never changed, and he pretty much shrunk away from the challenge from these young punks.  C’mon Mek, you need to go all Eastwood in Gran Torino on ’em.

10.  Next game is Tuesday night, on the road in Detroit as the Cats wrap up a four game road trip.