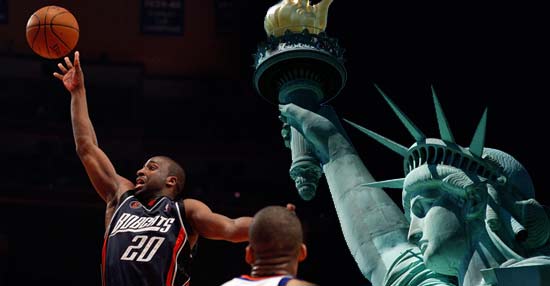 SIX IN THE CITY
Bobcats get their first win against the Knicks this season 114 – 105. Even more impressively, they set a club record with their sixth consecutive win as they chase the final slot for the Eastern Conference Playoff roster.

The Bobcats assumed control of the game within the first few minutes and held on despite the Knicks pace of play.  A strong start of three point shooting and avoiding turnovers put the Cats ahead by double digits before the Knicks forced three consecutive turnovers – scoring off of each. In the close of the first and leading into the second quarter, the Bobcats second unit with DJ Augustin, Desagana Diop and Vlade Radmanovich let the Knicks back into the game by giving up a run of quick scores without answering.  New York held the lead briefly before Diaw, Wallace, and Okafor returned to push Charlotte into the lead.

At the half, New York trailed only by two due to a huge 20pt half by Al Harrington and an infusion of offensive energy by Nate Robinson off of the bench.  The second half started with a quick series of lead exchanges, but Charlotte found their flow offensively just as the Knicks seemed to lose their legs.  The strong perimeter shooting that NY showcased in the first half disappeared and they provided no interior threat to counter Okafor and Wallace.

Mike D’Antoni’s system is incredibly entertaining and seeing the Bobcats succeed against their style makes for an exciting game.  Still, it’s more impressive that the Cats were able to run with the Knicks on the second game of their back-to-back (following Friday’s game against the Hawks).  There was far less media coverage of this visit back to the Garden by Larry Brown.  While it wasn’t a hyped rematch (both teams below .500), Brown valued the win after the game –  “I’m really pleased…we played backed to back and they have had a lot of rest in the last week or so. ”  Actually, it looks like the Knicks have run out of gas at this point in the season.  They’ve made a lot of moves this year and while the Cats are addressing immediate ways to improve their club, New York has maneuvered themselves toward the 2010 free agent auction and have simultaneously selected parts for D’Antoni’s system.  Despite the state of their roster, the Knicks had only played twice in the last week and had plenty of time to rest and plan for Charlotte on their home court.  If the Cats are seriously aiming of the Playoffs, then this was the kind of game that they needed to win.

Over the course of the current winning streak the Bobcats have carried and expressed a tone of confidence on the court. This maturing assuredness continued at Madison Square Garden despite a few serious runs by the Knicks throughout the contest. The Cats are playing at a strong professional level and seem to be dedicated on their improvement as a team. In a post-game interview, Gerald Wallace stated that the team peeks at the Playoff hunt but focus most of their attention on improving their play. This sounds like an extension of Larry Brown’s process-driven philosophy – play the right way and success will come.

Former Duke basketball stand-out Alaa Abdelnaby was a guest analyst for the Bobcats television coverage of the game.  He handled the commentary duties well and only played “homer” to the Cats late in the second half.  Thankfully, he did little to reference his playing days (ala Henry Williams).

As of March 8, 2009 – the Charlotte Bobcats are one game out of the 8th and final spot for the Eastern Conference Playoffs.