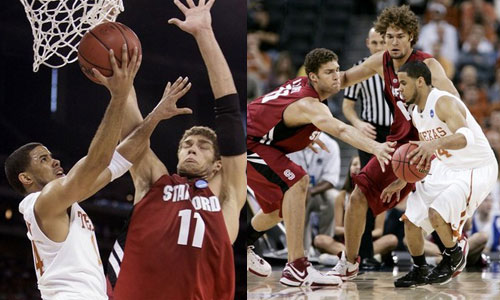 The Lopez/Augustin controversy lingers on.

Let’s go ahead and get it out of the way.  In the 2008 NBA Draft, the Charlotte Bobcats made a big mistake by selecting DJ Augustin over Brook Lopez.  At 7-foot, 260 pounds, Lopez averaged 13 points, 8.1 rebounds, close to 2 blocked shots (1.84 to be exact), shot 53%(!!!) from the field, 79% from the line (HEY!  A big man who hits his free throws!) and chalked up a superb 17.94 PER which placed him fourth overall in a banner freshman class.  The former Stanford center kept an underachieving Nets team in the playoff hunt up until the final month of the season and was later named to the All Rookie first team.

This is not to say that DJ was a bust.  The young point guard out of Texas averaged a little under 12 points and 3.5 assists per game.  While DJ only managed to convert on 43% of his field goals, he shot a spectacular 44% from beyond the arc and finished sixth among all rookies in True Shooting Percentage thanks to his outstanding 89% shooting from the charity stripe.  DJ will be playing in this League for many, many seasons to come.

Comparing only player for player, the choice of DJ over Lopez doesn’t look all that terrible.  From an organizational standpoint however, the ramifications may prove devastating.

Had Charlotte gone forward with its draft day plan of selecting Brook Lopez (a durable, multi-talented center) with the ninth selection, there would have been no need to later take on Gana Diop’s $26 million+ over the next four years in a desperation trade midway through the season.  Lopez is the far superior player and is guaranteed (thanks to his late lottery rookie contract) just $8.4 million during the same time frame.  Also, had Charlotte went ahead and drafted Lopez, they could have either moved 6’10” Emeka Okafor to power forward (perhaps his more natural position) or better yet pursued a trade of Okafor during this offseason in an attempt of luring back a top-flight SG or PF.

Drafting Augustin when the team had already invested a high draft choice in Raymond Felton a few seasons earlier made as little sense then as it does now.  Sure, we all have our reservations about Raymond but I highly doubt that anybody is ready to say that DJ is head and shoulders above Felton now or will be anytime in the near future.  The pick was redundant.  Felton is a better passer and a better defender.  DJ is a better penetrator, better free-throw shooter, and 3-baller.  He’s also 5’10”.

If Charlotte had drafted Lopez back in June, they’d be going into the offseason with a roster that looked like:

Okafor could be dangled as trade bait for a high-priced, high-scoring SG or kept to play PF with Diaw coming off of the bench as a sixth man.  The Bobcats would’ve also shed around $3.5 million per season from the unnecessary Carroll/Diop deal giving them a little more cap flexibility.

At any rate, DJ is here and for the time being at least, it looks as though the Bobcats spent the 9th selection of a very strong draft class on a backup PG.  A very good backup (think Kings-era Bobby Jackson) but a backup nonetheless.

In an aggressive draft day move, the Bobcats acquired Denver’s first round selection (#20) for a protected future first rounder.  With this selection, the Bobcats drafted Alexis “Freedom Fries” Ajinca.  *Sigh* where does one begin…?
UPSIDE?
In retrospect, I can see how Ajinca impressed during those pre-draft workouts.  There aren’t many 20 year old, 7-foot tall former BMX dirt bike champions.  Most guys at that height are more than just a little stiff.  Not Freedom Fries.  At a shocking 220 pounds, Alexis has a smoothness on the court rarely seen from someone his height.  He shoots a nice fifteen foot jump shot and can be an explosive leaper around the basket.  If you were one of the NCAA players working out against Alexis in those pre-draft workouts, you probably had little to no idea how to play a guy like Ajinca.  No wonder he looked so good.

DOWNSIDE.
Alexis Ajinca has absolutely no idea how to play NBA basketball.  In his limited minutes, Ajinca has shown a few shining moments of potential but for the most part looks completely lost.  He is grossly underweight for an NBA frontcourt player and will need at least two more seasons of professional strength and conditioning expertise in order to achieve an NBA body.  Unfortunately, he plays for the Charlotte Bobcats (you know, the team that just moved training camp back to their home city to cut costs) and not the San Antonio Spurs so he shouldn’t expect to see any specialized nutritionists showing up anytime soon.  Hell, instead of hiring a translator the Bobcats traded for a bilingual French PF to pull double duty.  Alexis also plays for Larry Brown who is not exactly known for developing foreign project players (see Milicic, Darko).

The good news for Freedom Fries is that Coach Brown was the one who apparently urged management to trade up and select the youngster from Saint-Etienne and that will probably give Ajinca at least another season or two to show us what he’s got.  The bad news is that the Bobcats (in need this offseason of a rugged, defensive SG to eventually replace Raja Bell) could have drafted a much more ready NBA caliber player in either Courtney Lee or Mario Chalmers either one of whom could’ve contributed from the beginning of training camp 2008 until the end of their rookie contracts in 2013.
Alexis Ajinca is one of those high-risk/high-reward stocks that your financial advisor warns you about.  In economic times like these, I’m not sure if that’s where a money-pit franchise like the Charlotte Bobcats should be investing.

I’m a little more bullish on DJ Augustin than my colleague, ASChin.  DJ is quicker and faster than Felton, and is a vastly better shooter.  I think he has the potential to be a better starting point guard for the Charlotte Bobcats than Felton.  If this team continues to go forward using Larry Brown’s Pistons championship squad as a model (no superstar, scoring responsibilities spread pretty evenly across the starters) then it would behoove the club to give the starting job to Augustin, the more efficient shooter/scorer.

However, if (as I expect) the Bobcats drag their feet on the matter by bringing Felton back and using DJ as a backup, then it will go down as a bad pick.  A money-losing, talent-challenged franchise like the Bobcats can’t afford to have the #9 pick in a pretty good draft and just get a backup out of it.

And yes, the rookie year that Brook Lopez put up makes the DJ pick that much more sketchy.  I still suspect that a Lopez/Okafor frontcourt wouldn’t have been a good fit (especially in the increasingly faster, smaller, more guard-oriented NBA of 2009), but it would have been a nice problem to have.

The Alexis Ajinca pick may eventually go down as a bigger joke than the Adam Morrison one.  We’re all rooting for Freedom Fries, but the guy is a long way from being able to contribute to an NBA team.  And a big part of the distance is his body habitus, which he may not be able to make up.

It’s also a bad thing that there’s really no precedent for Ajinca.  He’s taller than most centers in the league, skinnier than most guards, and has the skill set of a finesse combo forward.  Now, if you’re a singular, dominant basketball talent, it’s cool to not have a precedent in the game; think Lebron James, Shaquille O’Neal.  Those guys were/are so good that they dictate the way the game is played around them.  But Ajinca is not that skilled.  It would be helpful if there were other players like him in the league; i.e. there would be a template for how a 7’2″ small forward could be developed and utilized.

Even more concerning is that we’re eventually going to have to give up a draft pick to pay the Nuggets back for this one.  With our luck, it will probably be another lottery pick in a great draft.