Where Does Raymond Rank? 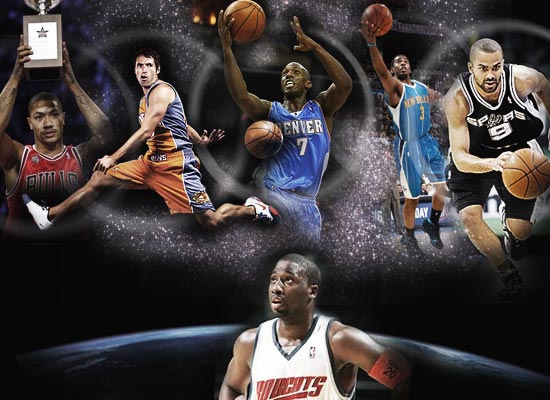 The Baseliners had a conversation today that started out like this:

“Is Gerald Wallace a Top 10 Small Forward in the NBA?”
(ANSWER: Surprisingly or Unsurprisingly YES)

And then we got to Raymond Felton.

Bobcats fans seem to be very high on the fourth year man this offseason; many wanted him signed and sealed by now but when we were trying to rank him today it became very clear why he hasn’t exactly dominated the national Free Agency headlines.

We based our rankings of Okafor, Wallace and Diaw by a criteria that combines PER, Traditional Stats, Contract Money & Length, Age and Potential.  We topped it off by swiping a great deal of the Bill Simmons “Trade Value” formula (which is oddly one of the best barometers in rating players) to do the final rankings.

For those who aren’t familiar with the Simmons formula, it goes something like this:

In the Boris Diaw example, to determine final rankings, you’d do the virtual GM to GM phone call and see if it works.

ON THE OTHER HAND:

ROD HIGGINS: Hey, David Kahn, I know that you’re probably somewhere in Spain right now pulling a Don Logan on the Rubio family but I wanted to offer you Boris Diaw straight up for Kevin Love (lower salary, higher PER, higher ceiling).

Before we start our Point Guard rankings, let me set up the rules:

1.) It’s a tier based system and PGs in lower tiers would never be accepted straight-up for PGs in higher tiers (except in extreme financial situations).

2.) Contracts matter; there’s no reason to throw millions more for a player of roughly the same caliber.  That said, talent trumps money in this list.  We want to find out who the best Point Guards are so individual team salary cap situations are ignored.

3.) To even the playing field, we’re limiting the scope to the next 3 seasons.  Who could give you 3 solid seasons worth of play?  This makes ranking players at different stages of their careers like Jason Kidd and Russell Westbrook more interesting.  (And seriously, do NBA teams really plan out past three seasons anyway?)

4.) Potential matters.  If guys are already playing at a high level and have yet to even touch their prime, then they get the nod.  Players of this mold are often also on cheap rookie contracts giving them a financial bonus as well.

5.) This year’s rookie crop is excluded.  Prospects like Rubio, Curry and Beaubois will have to wait until next year.  This is about point guards who have played in actual NBA games.
So, without further ado…

What’s there to say?  The first three guys are tearing up the League and haven’t even hit their primes.  Parker has two rings and is just reaching his.  Nash and Billups make mediocre teams into playoff contenders just by being on the floor.

Tier 2: “I’m Only Trading If You’re Offering Me A Tier 1 Player Or If Your Tier 2 Guy Is A Better Fit”

Westbrook has a chance to be a star and is on a rookie deal.  Rondo has another year left on his.  Monta Ellis might win another “Most Improved” award this season after staying off mopeds for an entire summer.  Williams, Nelson and Calderon have decent contracts and are young enough to still improve.
(*If there are any Felton fans out there getting peeved that he isn’t included in this tier, just refer to the VIRTUAL GM PHONE CALL drill above and see if it works…  See, I told you.)

Tier 3:  “These Dudes Can Still Bring It”

Big contracts and questions about their age and health are the only things weighing down these former All-Stars.  Kidd and Miller are still capable of dropping in Triple Doubles on any given night.  Bibby’s leadership led the Hawks to the 2nd Round of the Playoffs this past season and Baron Davis’s “lack of motivation” dropped him several spots from the 1st or 2nd Tiers that he should still be in.  Arenas (if healthy) may return to being a superstar this season.  What’s more is that the guys in this Tier can still win you games in the 4th quarter.

As the headline states, these players are young, full of potential, ready to play now and cheap.  Refer to the VIRTUAL GM CALL if you want to know why they rank ahead of the players on the next Tier.  *Conley was the only non-consensus choice.  I gave him the nod because he’s a top 30 PG in PER and still only 21 years old.
Would the Rockets trade Aaron Brooks straight up for T.J. Ford?  Would Detroit trade Stuckey straight up for Chris Duhon?
An even tougher question: If D.J. Augustin played for the Raptors, would Colangelo take Felton straight up for him?  (Also, if Augustin played for Toronto, would he have start smoking during halftime, grow a euro-beard and pretend that he was from Spain?)

At last, we’ve arrived!  Raymond, take your shoes off and relax…you’re home!  And this home is nothing to be ashamed of.  Sessions, Duhon, Alston, Blake, Ford and Felton are all decent, quality NBA starting Point Guards.  Though if any one of these teams could upgrade to one of the above players, would they do it?  As Gov. Palin says, “You Betcha!”

Tier 6: “Starters In A Pinch But Better As A Backup”

Nate was the hardest guy to rank because you’d never want him starting for you at the point on a contending team but he is such an asset off of the bench that he almost jumped a Tier (get it).  Chalmers, Hill, Bynum, Watson and Williams have all shown glimpses of potential but just aren’t consistent enough to be quality everyday NBA starting points.  House, Daniels and Fisher are all veterans who can provide quality minutes on a playoff team.

So you see, there’s a reason why Raymond hasn’t signed a massive offer sheet with another team this summer and it has nothing to do with the economy or the fact that he’s a Restricted Free Agent.  Felton is a solid, Top 25 NBA PG who has some potential for improvement.  Period.  (For the record, John Hollinger has him ranked 31st for ’08-’09 in PG PER)

The Bobcats are smart to learn from their previous mistakes in free agency.  There’s a reason that the ‘Cats are currently saddled with Gana Diop’s Ganormous contract.  They had to take it on in return for Matt Carroll’s ridiculous deal.  Carroll “earned” that contract mostly because he was a known commodity & well-liked player.  Not because that was what he was worth on the open market but because the Bobcats mistakenly viewed him through the altered state of “Homer-Vision.”

Keeping in mind that we didn’t rank this year’s strong class of rookie PGs and the fact that we didn’t rank swing players like Allen Iverson or Jason Terry, it becomes very apparent that today’s NBA has as much quality and depth at the position as it’s ever had before.  A fact that Raymond, his agent and his fans are fast discovering.