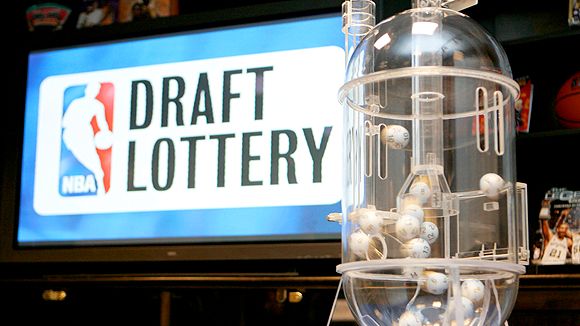 Tonight at 8:30 ET on ESPN, prior to tipoff of the Nuggets/Lakers Western Conference Finals, the NBA will host the 2009 Draft Lottery.  Bonnell is reporting that the Cats are sending DJ Augustin to represent the club at the awkward, game-show-like proceedings.

The Bobcats finished the season with the 12th worst record in the league, which is good for 7 lotto ball combinations out of 1000 in the drawing tonight.  By comparison, the league-worst Sacramento Kings have 250 combinations assigned to them.   In all likelihood, the Cats will end up drafting in the 12th spot.  But for dreamers everywhere, here are all the possible results for the Bobcats, along with some meaningless speculation about the choice the Bobcats would make.

1st pick (0.7% chance) — No brainer here, it would be Blake Griffin all the way.  According to ESPN’s Chad Ford (and common sense), there’s not a team in the lottery that would pass on Griffin at #1.  As long as he does indeed measure up at around 6’9″ or 6’10” (and his hometown newspaper insists he will) he is a prototypical NBA power forward along the lines of Karl Malone or Carlos Boozer.  The thing that doesn’t get brought up much is that, in today’s small-ball, Griffin is big and strong enough to fill in at center against some lineups.

2nd pick (0.8% chance) — This would be a tough one, as 19 year old Spanish point guard phenom Ricky Rubio is pretty clearly #2 on everyone’s draft board; however, the Cats already have something of a point guard dilemma on their hands, having used their lottery picks in 2005 and 2008 on Raymond Felton and DJ Augustin, respectively.  Besides that, Rubio has an allegedly unwieldy buyout from his Spanish club, and would probably rather be in a larger market than Charlotte.  Certainly, the Cats would take a hard look at Rubio, but they’d also look into some of the 2-guard prospects ranked just below Rubio — and you can’t rule out the possibility that they would consider trading the pick, as there are several teams that really covet Rubio.

3rd pick (1% chance) — Three man race, here.  James Harden, Demar DeRozan and Tyreke Evans battle it out for the right to be Raja Bell’s understudy for a year before taking over the starting 2-guard job for the Cats.

12th pick (94% chance) — Unless DeRozan or Evans would slip here, it’s just too early to predict what would happen here.  Stephan Curry will probably also be gone by then, and I’m not sure he’s a good fit anyways.  Gerald Henderson and Jrue Holiday are names to keep an eye on.

13th pick (0.4% chance) — On the teeny-tiny chance that either the Suns or Pacers move up into the top three, the Bobcats would be bumped back to the 13th pick.  It would be the same story as the 12th pick, with the Cats likely looking for the best 2-guard left.  Maybe Earl Clark slides into the picture if all the 2-guards are gone, but he seemingly replicates Boris Diaw’s skill set a little too closely.

So there you have it.  Get all your lucky charms out and think positive thoughts tonight, Baseliners.