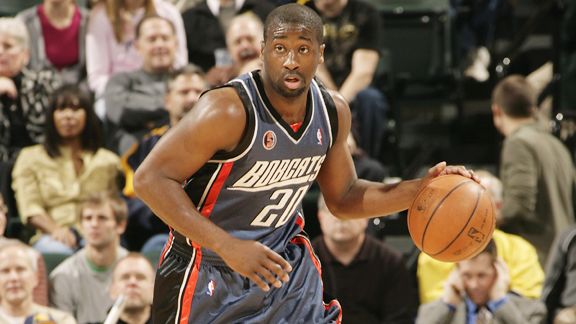 A couple of notes before we get started:  1) I originally started writing this as a comment to my colleague’s “RaymondHater” post from earlier today, which itself was a comment on Rick Bonnell’s weekend story from the Charlotte Observer that briefly ran down the different options for dealing with Raymond Felton.  But my comment quickly got way too long, so I just decided to keep going and make it a post of its own.  Be sure to check out that original post, especially for the awesome photoshopped banner pic.

And 2) Please be assured that I am not really “hating” on Raymond.  I use the term facetiously.  As discussed earlier this week by Simmons, the word has been beat into the ground.  Anyways, I really like Raymond.  His heart, durability, and overall “good-guy-ness” are off the charts, yet don’t show up in any statistics.  A strong argument could easily be made that we’d have been better served drafting Brook Lopez, clearing a little cap space this year (instead of adding salary) and resigning Felton to be the long-term point guard.

Alas, that hasn’t happened, so we’ll now proceed with my long-winded defense of trading Raymond.

It must suck to be Bonnell and have to write these pithy articles aimed at the mainstream/casual fan about really complicated decisions.  (Then again, it must be pretty cool to be Bonnell and get to cover basketball for a living.)

Though the long term salary cap ramifications are THE MOST IMPORTANT FACTORS underlying the decision about what to do with Raymond, there is precious little mention of them in the article.

The fact of the matter is that, between Wallace, Okafor, Diaw, Diop, Mohammed and Radmanovic, this team has tied up a trememdous amount of their salary cap for the next several years.  Go ahead, click on that link — it takes you to the Bobcats salary page on HoopsHype.  Then tool around a bit and sample some other team’s payrolls.  Not many teams have so much money committed that far out in the future.  And if they do, they are playoff teams with superstars.

The economics of the NBA, especially for a small market team trying to avoid the luxury tax, dictate that young players on their rookie deals who show signs of panning out be given every opportunity to develop and contribute.   Simply put, such players are cost-effective and locked in to the team that drafted them for four seasons.  The Bobcats have such a player: DJ Augustin — he’s making 2.2 million this year, and gets incremental increases up to 3.2 million in his fourth year, 2011-12.

Keep in mind, DJ has accumulated these stats as a rookie, and almost always playing either with the second unit, or out of position as an undersized 2 guard with the first unit (i.e., when DJ and Raymond play together, DJ generally guards the other team’s PG on defense, but more often functions as the 2 on offense).  We can only speculate how much better he’s going to get.

DJ needs to be given the reins.  Keeping Raymond around will not only kill our cap, it will impede DJ’s progress; just like having Brevin Knight and Jeff McInnis around in recent years likely impeded Raymond’s development a bit.  Let’s not make the same mistake again, people.

It would be great to be able to keep Raymond around as a backup — maybe as a 6th man who can play the 1, or the 2 against smaller lineups.  But on the open market, he will demand a starter’s salary (probably 8-9 million per) from a team desperate for a decent PG.  He should and will take it, and the Bobcats shouldn’t match.  Doing so would give us a ridiculous fifth player (in addition to Okafor, Wallace, Diaw and Diop) making 7 million plus in 2011-12; or to look at it another way, 3/4 of our cap would be taken up by five guys, 2 of them (Felton and Diop) non-starters and none of them superstars.  That’s not how you build a playoff team.

The only thing that gives me pause is that we’re learning more and more about how much financial trouble some teams and owners are in.  The salary cap will likely be reduced in the coming years, as opposed to the incremental raises we usually see.  It means that this is a pretty miserable time to be a free agent.

Might we be able to keep Raymond for significantly less than we figured at the start of the season (maybe like 6 million per)?  And maybe for a shorter deal than otherwise would be customary?  What we’ll likely see is that young veterans, like Raymond, will be looking to sign shorter deals than usual, in hopes that the economy will have turned around in time for their next contract year.  So I suppose it’s a possibility.  But in the spirit of “either shit or get off the pot” I think it’s a bad idea.

What I would rather see the Bobcats do is to improve the long-term prospects of the franchise by trading Raymond now.  Not only will DJ benefit, but we might be able to pick up some cap relief, and extra draft pick or two, or even a reasonably priced rotation player.  This is obviously contingent on finding a team that is somewhat desperate for a short-term solution at PG; or a team that wants to audition him before bidding major money on him in free agency.

Orlando (ready for a playoff run, but with their PG Jameer Nelson likely done for the year) or Dallas (in need of some depth behind an aging Jason Kidd and an injured Jason Terry) might fit the bill.

What would/should we be looking for in return?  Ideally, we package Nazr Mohammed and his awful contract (2 more years remaining after this one, at 6.5 and 6.9 million, respectively) with Raymond for cap relief and flexibility.  If a team was willing to take Mohammed, all the Bobcats would likely be happy to take back a pu-pu platter of expiring contracts and draft picks in return.

If no one is desperate enough to take on Mohammed (very likely in this economic climate), we’d probably do good enough to just get back a rotation player who’s signed to a nice deal.

I think Orlando might be the most likely partner here.  All indications are that Jameer Nelson will have surgery on his busted shoulder and be done for the year.  That leaves Orlando with Anthony Johnson and Tyronn Lue at PG.  Now they certainly could just roll  into the playoffs with that, and risk getting embarrassed in the first round, but wouldn’t Raymond be better for them?  At least they get to the second round with Raymond, and everyone benefits from the playoff experience.

But would Orlando be willing to part with enough to do this?  Raymond Felton for rookie SG Courtney Lee (plus Brian Cook to balance the salaries) works, but it’s hard to imagine Orlando giving up their promising rookie.

What about Raymond for Mickael Pietrus (Charlotte would have to add in Alexis Ajinca for this to work).  Orlando has already shown that they are fine without Pietrus, as they played well when he was out with an injury earlier this year.  And for Charlotte, he’d be a great option to take over at SG for Raja Bell, who is aging and getting brittle, and only singed through next year.  Pietrus is signed to a very reasonable deal (5.3 per through 2011-12) and would be a perfect long defender to pair with DJ in the backcourt for years to come.

So there you go; thanks for reading.  And if you can make a more convincing case for tying up our cap with Raymond for 4-5 years at 6-9 million when we have a better option available in DJ at less than half that… please do.

4 thoughts on “The RaymondHater Manifesto”