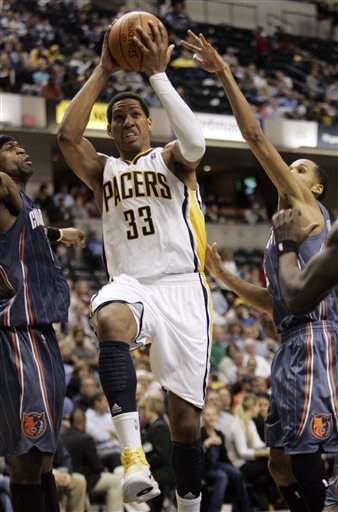 Bobcats sorta show up against the Pacers Friday night and kinda try to stay in the game until finally losing a winnable game against an okay Indy team 100-92.

In the tradition of the Bobcats effort of late, I’m gonna sorta attempt this recap.  Basically the Bobcats are good enough to stay in games and win a few of them when they feel like it and aren’t bad enough to be blown out.  After tonight’s loss, the Pacers are 3.5 games up on the Cats for 7th seed in the East.  I’ll be honest, I really tried watching all 48 minutes of this game but the effort was just so poor that I found myself reading about Julian Assange and his amazing ability to have sex with a woman in her sleep.  Stephen Jackson should know something about this, Pressure ain’t been made love to in a long time.

You gotta believe that LB and MJ are working the phones in order to salvage the season.  The Playoffs are still within reach (barely) but the team will need to make a solid run by the All-Star break in order to separate from a crowded pack.  The current configuration just isn’t putting in the extra effort that made last year’s team overachieve.

Until Next Time, Enjoy the Loss Bobcats Fans,

One thought on “Another Half-Hearted Effort in Indy”