Late Rally Not Enough for The Bobcats to Catch The Magic 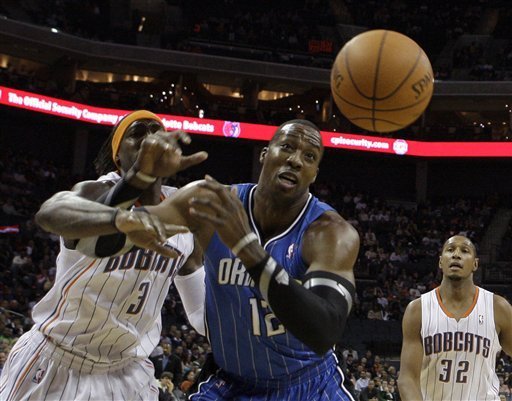 Charlotte Bobcats lose at home to the Orlando Magic : 91–88

After falling to the Detroit Pistons last night, the Bobcats had a date with the Magic on the second night of their back-to-back. It looked like Orlando felt a little bad about the Playoff sweep and decided not to activate Jameer Nelson (recovering from injury) for the match-up at the Cable Box. Chris Duhon got the start alongside Vince Carter, Quentin Richardson, Rashard Lewis and the intimidating Dwight Howard. Charlotte used their standard starting five – D.J. Augustin, Stephen Jackson, Gerald Wallace, Boris Diaw, and Nazr Mohammed. By just pairing those names alongside each other, we should’ve expected a blow-out by the Magic.

The Bobcats should be commended for not digging a huge hole to start the game. They used their homecourt advantage to stick pretty close to Orlando for much of the first quarter, and stayed within striking distance at the half. Unfortunately, Charlotte only had 36 pts at halftime. Not too many teams are going to threaten the Magic with 36 pts going into the 3rd quarter. For nearly all of the second half, the Orlando Magic executed their offense efficiently enough to keep a persistent stiff-arm of around 12pts to hold the lead. The momentum swung Charlotte’s way mid-way through the 4th and the Bobcats’ run coincided with an injury to Vince Carter, allowing the team to nearly steal the game in the final minutes. On the last possession of the game, neither Stephen Jackson, Boris Diaw, nor D.J. Augustin had the firepower to get the final 3 points that the Cats needed to tie the game against the much superior Magic squad.

Dwight Howard Really Is That Good At Basketball

I had intended to use this space to recap how huge Dwight Howard’s slams would be and compare them to the types of dunks that he’s capable of throwing down in the new NBA JAM.  Honestly, I feel like I’ve seen him do some things in the past that are way crazier than the moves executed his cartoonish Jam character. Now, after the game, I have to say that the Bobcats did a great job of minimizing his monster dunks. Sure, Dwight had a couple really good ones while the Magic were rolling in the first half. But, I was more impressed by his hook shot from the right, and his 8′ jumper. Nazr Mohammed did his best to affect Howard, but it really just looked embarrassing for ol’ Naz’.  Dwight had everything going in the first half, but it seemed that Larry Brown adjusted the guys on defense and they kept Superman playing like a mortal at the close of the game. I’ll touch on this a bit more down the page.

The first thing I noticed about Vince Carter during the game was his ability to get space to get off a good shot. He may not leap as high as he once did, but he knows when to cut, how to slide around a screen, and exactly how to make a jab step move his defender. Secondly, I was frustrated to see just how good Carter is at selling a foul. The Bobcats play more physical than they ever have, and yet they don’t seem to get the easy whistles. For much of the game, it seemed that Vince was getting Tyrus, Stephen and Boris called for fouls by simply turning his body to get contact in a manner odd enough to get a whistle. If he was fighting through a screen, it was like he would start high and come around the defender twisted and heading down like he had just been whacked in his shoulders. Vince Carter was selling the contact better than Vince McMahon.  Lastly, Carter’s injury in the 4th quarter looked bad. He appeared to slip on a wet spot at the top of the key and his legs went in absolute opposite directions. Hopefully, this wasn’t a serious injury.

Gerald Wallace Was On

Crash finished the game with 25 points, and it looked like he had plenty of energy despite going for all but a few minutes against the Pistons on Friday. From what I could tell, that ankle sprain in New Jersey should be behind him soon. Wallace opened the game with a couple of jumpers and helped to spread the floor by knocking down open threes. He seemed to pair well during his time with the other Gerald (Henderson), too.  Henderson knocked down a couple of open shots and showed some defensive prowess with a crazy-athletic sprint-to-leap-to-block on Rashard Lewis. Larry Brown should note the benefits of an excessively athletic set of Geralds on the wings.

Stephen Jackson and Boris Diaw both looked really good and really bad during the game. Stephen Jackson just seems out of sync at times and his bad passes seemed to always result in a score by Orlando. Boris Diaw looked good for stretches and then totally out of place and out of rhythm on offense late in the game. Neither of these guys were horrible, and neither were incredible. If they can both minimize those periods of inexplicable mistakes, the Bobcats would start to look pretty good. While Diaw’s offense went into hiding during the last stretch of the game, he seemed to do a great job guarding Dwight Howard. Larry Brown chose to go really small with Diaw at the center spot, but Orlando couldn’t find a way to let Dwight dominate the paint. Actually, I think Boris had a couple of blocks on Howard in this one. While the Frenchman may have missed the potentially game-tying three-pointer in the last seconds, I’m not sure they would have been that close without his surprisingly solid defense.

D.J. Augustin appears to be improving. It’s exciting to see him build to his repertoire of skills. His passing, awareness, and shooting are all on the upswing, right now. The crowd at the arena went crazy over his floater in the lane late in the 4th quarter.

Tyrus needs more minutes. When we see Tyrus Thomas come out for a few brief plays in the first half, he seems out of place and he picks up a couple of fouls pretty easily. As he plays for longer stretches, Thomas really starts to influence the game and he plays in rhythm. When he stops pressing, he plays like a serious threat on both ends of the court.

Lastly, Saturday night was Nelly’s birthday and he spent it with us and the Bobcats at Time Warner Cable Arena. Nelly, a partial owner of the Bobcats team, sat courtside and received a big ovation from the audience when he was shown on the big screens above the court. The promo for his upcoming release “Nelly 5.0” did not receive such a warm reception.

Bonus Observation : Eduardo Najera had a pretty great style going in street clothes for the game. If anyone has a picture of Eddie in his white jacket, please post it in the comments.

Next game is Monday night at the Cable Box versus Tim Duncan, Tony Parker, Manu Ginobili and the San Antonio Spurs.

6 thoughts on “Bobcats Almost Steal One From The Magic”