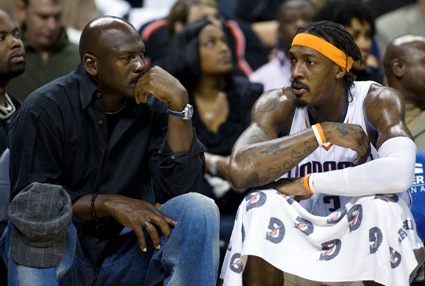 The Bobcats Were Headed In The Right Direction.

The struggles of the Charlotte Bobcats franchise have been well documented in the blogosphere. The team’s initial challenges, failed plans, losing records, and last season’s rise to respectability should be familiar tales to anyone visiting Bobcats Baseline. Last year, the Bobcats seemed to be making progress in overcoming every hurdle that had impeded their years of efforts toward success.

First, Stephen Jackson’s arrival brought a scoring threat to match Gerald Wallace’s unstoppable hustle, giving Charlotte the best pair of “wings” in the league. Next, it was announced that Michael Jordan had purchased the majority stake of the franchise. The team had finally been shed of its much-disliked owner, Bob Johnson (who still holds a small slice of the team). The public disdain of the Bobcats name began melting away with Michael Jordan as the face of the franchise. As the season went on, the team’s play improved and Gerald Wallace became their first All-Star (and Dunk Contest participant). The season wrapped up with the club’s first Playoff run, and an arena atmosphere that the city hadn’t felt for a decade. Despite losing to Orlando in a series sweep, the Bobcats looked to be on the rise. Overall, the 2009-2010 season looked pretty good for that team down there in Charlotte.

Oh, how different things seem after just a few months.

Just When Things Were Looking Up…

So far this season, we’ve seen the Bobcats stumble to a disappointing 8-15 start while giving fans no reals signs to indicate any chance of improvement. This wasn’t the way anyone saw it playing out, after their Playoff run. The Bobcats’ defense has yet to show any resemblance to last year’s squad, and they’re somehow playing offense even worse than they did a season ago. Stephen Jackson is moving way too slowly, Gerald Wallace is ineffective, and the team has been forced to start Nazr Mohammed at the Center position. Last week, reporters caught Jack and Crash venting their frustration and questioning their point guard. We’ve heard good things about the camaraderie of the team’s locker room, but even that seems to be shaken at this point.

Not only has the team struggled on the court, but it seems as though Coach Brown is starting to enter the “I’m gettin’ too old for this, shit” phase of his stint in the Queen City. Charlotte Observer’s Rick Bonnell described Larry Brown as “dispirited” in a recent story. Plus, the predictable, non-story headlines of “Can Charlotte Get the Hornets Name Back?” have popped up  in the local papers just in time to remind people that they were supposed to hate the Bobcats and love the Hornets (via nostalgia / ex-girfriend complex).

Now, we’re hoping that the Bobcats can do something to save their season and regain momentum. They certainly need to make an effort to put them back on track with the steps they had made last year. At the moment, the only symbol of success that the Charlotte Bobcats possess is ol’ Air Jordan, the owner. So, let’s hope that a few more seats get sold for tonight’s halftime celebration of Michael, as he’s inducted into the NC Sports Hall of Fame. Otherwise, the team’s owner might find a slight buzz-kill when he accepts that trophy/plaque/whatever and smiles outwardly to a house full of empty seats.

We don’t know how the Bobcats will respond to their recent breakdown, but the team couldn’t have asked for a better opponent than the Toronto Raptors to get them back into form. If it’s true that Michael Jordan gave the team a shouting critique of their ineptitude after the Celtics game, we should expect that the Bobcats arrive for this game ready to win or ready to get traded.

It’s December and the Bobcats are 7 games under .500. It can only be expected that Larry Brown will let the front office know what he feels they need to get back to winning. It’s probably time that Michael Jordan and General Manager Rod Higgins start listening to him.

I should note a few of the positives that have happened for the Bobcats, as of late.