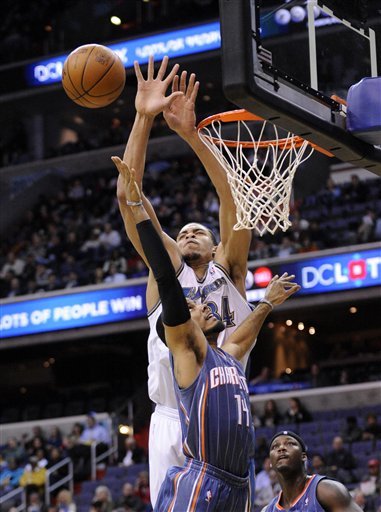 The Washington Wizards absolutely crushed our Bobcats Monday night, winning 108-75. The Cats were just outclassed all around, especially our starting five. The most surprising thing? We were only down by five at the half. The second half was Wizards 58, Bobcats 30. WE LOST BY 33 TO THE WIZARDS WITHOUT JOHN WALL. Now, everyone please follow these instructions: 1) Hold out your palm 2) Bring your palm up with velocity 3) Palm your forehead.

Seriously. Perhaps the best descriptive word here is “eviscerated.” If you combine the scores of the first and third quarters, which are played by mostly the starters, the score is 63-36. Let’s see, what else before I go into the Yays and Nays? Oh yeah! Nazr Mohammed, who may be the most level-headed player on the team, was ejected after getting a pair of technical fouls when he was called for a questionable offensive foul. What else, hm… How about our TWENTY-NINE TURNOVERS. That’s the most turnovers in a game since November of 2006. Let’s give our team a hand!

Before this game, I was thinking about buying tickets to the Thunder game tonight. I no longer want to do so. It’s not that I can’t stand to watch a blowout. I’ve sat through huge drubbings, including a 35-point loss to the Pacers in the 08-09 season. The problem I have with this team is that I’m not seeing any heart from our starters. I’m seeing it from the bench players, but when the coach can’t or won’t recognize that there are guys on the bench that are more talented and with more heart than the guys who get the start, it’s more often than not a moot point.

Yes, the Bobcats were missing Gerald Wallace, but I don’t see that making that big of an impact. Even if Gerald had started, the defense was a team failing and Dominic McGuire’s playing time would have just preempted Derrick Brown’s or Tyrus Thomas’ minutes who were some of our most productive players in this game.

Also, if you have a sports-centric masochistic streak like I do, you stuck around through the whole game and then stayed to watch the Larry Brown post-game presser.  In case you missed it, I transcribed it:

Reporter: How do you explain that third quarter and – [cut off by LB]

LB: The first half, the first quarter – the first quarter was the game. They scored like, what, the first ten times down the court? That was the game. Then we started the second half with the same group. You know the bench got us back in the game. So we were down 5 – it was a miracle down 5 at halftime – and then same again. And that’s a coach’s responsibility. To look like that, I feel bad for the young kids cuz it looked totally disorganized. You know, Flip’s team executed, shared the ball, played hard. That’s what teams are supposed to do, not the way we do. And that’s totally on me. It looked like it was the first day of practice and maybe it was a pickup team playing against an NBA team.

It’s a nice gesture, I guess. It felt sincere. But we have known that for weeks. As Dr. E noted on Twitter, “What kind of loss or losing streak will it take for Bobcats front office to realize that the team has quit on Larry Brown?” That sums it up perfectly.

I’m just waiting for better days. It won’t be soon, unfortunately. I just hope to not lose sleep over this. After all, I have no control over the Bobcats’ personnel decisions.