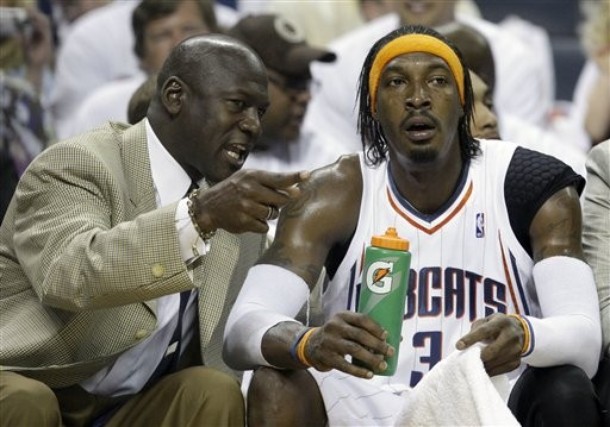 How (and Why) to Break Up and Rebuild the Team

The firing of Larry Brown and his staff was a step in the right direction for the Bobcats.  Brown put his typical stamp on the Bobcats franchise; which is to say he turned over nearly the entire roster while sending the franchise deeper into salary cap hell, but coached the hell out of the players and pushed them into the playoffs, only to completely lose touch with them soon after that.

Michael Jordan had to let Brown go before the disintegration of the team got any uglier on the court and before Brown talked him into another short-sighted trade off of it.  Pricey veterans, whether they come via trade or free agency, are good short-term fixes for teams that have a superstar/championship core and are making money — not for fledgling small-market teams that barely have a playoff-ready core.

Unfortunately, by the sounds of all the recent rumors, Jordan is apparently considering just such a short-sighted trade.  Even without Larry Brown in his ear, Jordan is ever the gambler, unable to stop himself from doubling down even when he’s only holding 8.

I have a different plan; a smarter plan.  It might be painful, but in the end it’s the best strategy for a small-market team to achieve long-term success and have a chance at a championship.  Let’s start from the beginning and go step-by-step through my plan to break up and rebuild the Charlotte Bobcats.

Alright!  Done and done.  Jordan is already one step ahead of me with the hire of Paul Silas.  The Bobcats don’t get lucky much (ever?) but it works out pretty well that you have a beloved former coach who has semi-retired in your town and has made it known that he’d love to coach the local team again.  Huggy Bear makes a great foil for the departed Larry Brown, and has wasted no time instituting an uptempo offense.

Now I’m sure that Jordan has let Silas know that he still intends to make the playoffs, and Silas would like to prove himself worthy of shedding the interim label, but let’s face it, the pressure is pretty low here.  Mostly, the Bobcats should just be happy that such a nice fit for an interim coach was so available and that they avoided any ugliness with Larry Brown.  The players will get a temporary (maybe sustained?) kick out of playing for someone so different than Larry Brown.  And Paul Silas gets a shot at coaching Charlotte again.  It’s a win-win-win.  And if the team improves on the court, you can add another “win” for us fans.

Here’s where we get get down to business.  The Bobcats are not going deep into the playoffs with a top three of Gerald Wallace, Stephen Jackson and Boris Diaw. Many, if not most, fans have accepted this.  The best way to kick off a proper tear-down would be to trade Stephen Jackson for cap space/draft picks/young talent.  Jack is making $8.5 million this season, $9.6 in 2011-12 and $10 in 2012-13.   He’s enough to keep a mediocre team competitive on some nights, but not enough to make us great.  He would be great as the final piece to a team that’s looking to make a serious run at a championship this year or next.

I’m thinking mostly Chicago or New York here.  Chicago runs Keith Bogans and Ronnie Brewer at 2-guard amidst Derrick Rose, Luol Deng, Carlos Boozer and Joakim Noah.  Enough said.  The Bulls don’t have any good expiring contracts, so the Cats would have to take back a couple of young role players to make salaries work.  Most importantly, the Cats would look to get back the future first round pick that we sent to Chicago for Tyrus Thomas.

As for New York, suppose the Nets really are able to secure Carmelo’s services.  The Knicks would have to move on from their fantasy; wouldn’t adding Stephen Jackson to Felton, Stoudemire and Gallinari in D’Antoni’s offense be a nice reality for them?  The Knicks could offer Eddy Curry’s huge expiring deal; if the Cats threw in another salary maybe we could have a look at the enigmatic Anthony Randolph?  Or better yet, Wilson Chandler?

And I’m sure there are some Western Conference teams that might work, too.  Or maybe it’s Boris Diaw who goes out?  Just not Gerald Wallace if it can be helped — that might even test my limits as a fan.  Whatever the case, the idea is that the current core isn’t going to get it done and we need to get cheaper and collect young talent and/or draft picks in exchange for them.

This is the easiest, most no-brainer part of the plan.  No doubt, the psyches of DJ Augustin, Tyrus Thomas, Gerald Henderson and Derrick Brown must be traumatized by their time with Larry Brown; but they’ve also learned a lot.  And there is talent there.  Paul Silas is the perfect coach to loosen the reigns and instill confidence in this crew.

I would try to limit Gerald Wallace’s minutes to around 30-35 per game to preserve him and to give Brown and Thomas a little extra run.

Hopefully everyone emerges as a better player for the long haul; on the other hand, if someone flames out, at least you know.

4) Be Prepared to Miss the Playoffs This Year… and Next

And here’s the real problem.  Jordan is in a tough spot here; you have to believe that at some level he knows that it’s time to blow it up and rebuild the right way.  But he doesn’t have the stomach for losing, even temporarily if it’s in the service of a bigger goal.  And he can rationalize what is really his inability to stomach losing by saying that the Bobcats’ cache with the fans in Charlotte is so tenuous that they couldn’t stomach losing either.  That they’d just turn away for good if the team doesn’t make the playoffs again this year.  So he needs to keep finding expensive band-aids; but for what?  First round playoff blowouts?

Bull.  I’m not saying it wouldn’t be painful to watch a rebuilding team for a couple of years — the Bobcats would probably fall back to the 25-30 win per season range for this season and the next.  And it would hurt Jordan financially, I’m sure.  But I would argue that it would be more painful to watch a patched-up, veteran core muddle through a couple more 35-40 win seasons — and that the financial reward Jordan would reap from building an upper echelon team in the long run would more than offset a couple of lean years.

And here’s the lynchpin of my thesis — the most important part is also the most difficult.  In my plan, the Bobcats would have lottery picks, potentially high ones, in the next two drafts (even if we didn’t get the Tyrus Thomas one back from the Bulls, it is lottery protected in 2012).  The Bobcats would need to find a superstar — or at least a new blue-chip core — in those drafts.

I know you’re all laughing, and rightfully so as visions of Adam Morrison and Sean May dance in your heads.  But eventually, sheer luck dictates that Jordan will make the right call one of these days, right?  Doesn’t it?  And even if he doesn’t get so lucky as to have a superstar fall into his lap, he must have learned something about scouting/evaluating players over the past few years that will help him to make better picks, right?  Even if the lesson is as simple as: “I shouldn’t be a part of this — lemme hire some better scouts.”

Maybe that’s wishful thinking, and maybe the Bobcats are doomed to be poor drafters forever and ever.  But it doesn’t change the fact that the draft is how small-market teams become contenders.  Whether it’s San Antonio with Tim Duncan, Orlando with Dwight Howard, Utah with Deron Williams, New Orleans with Chris Paul, Oklahoma City with Kevin Durant, or even the Cleveland Cavaliers of years past with Lebron, a small-market team has to get a game-changing player near the top at the draft to become a contender.  That guy’s presence then allows you to utilize trades and free agency to shape the team around him.

Only LA (Lakers, that is), Chicago, Boston, New York, Miami, Phoenix, and possibly Dallas and Houston could realistically hope to construct the core of a contending team without the benefit of a great draft pick.  And despite that, most of those teams do indeed count a player they drafted among the core of their team (Rose & Noah for Chicago, Pierce for Boston, Wade for Miami).

So it’s time for Michael Jordan and GM Rod Higgins to abandon their plan of building through trades.  If they were aware of and taking advantage of some sort of market inefficiency, we’d have seen better results.  Instead, the Bobcats need to get back into the lottery to get back into the playoffs.

Again, we have to hope that he’s learned something from his mistakes.  The rumor mill has suggested that Jordan contemporaries/current NBA assistants Patrick Ewing and Tyrone Corbin are in line for a shot at a head coaching job.  And Nate McMillan might be divorced from Portland by the time the Bobcats would be looking.  Would Phil Jackson recommend any of his assistants to Jordan?

Anyways, if the Bobcats followed a comparable blueprint and got to the point where hiring the right coach seemed like a crucial piece to the puzzle, I’d be overjoyed.  As it stands, we’re a long way off.

Unless the Bobcats come out like gangbusters for Paul Silas (and he does have a favorable slate with home games against Detroit, Cleveland and Golden State this week) I think you’ll see Jordan pull the trigger on a big trade soon.  What the Bobcats get back (a pricey veteran versus expiring contracts/draft picks/young talent) will tell you whether he’s sticking to the same M.O. — or moving on to a proper rebuilding plan as I’m suggesting.

4 thoughts on “Dr. E’s Treatment Plan For The Bobcats”