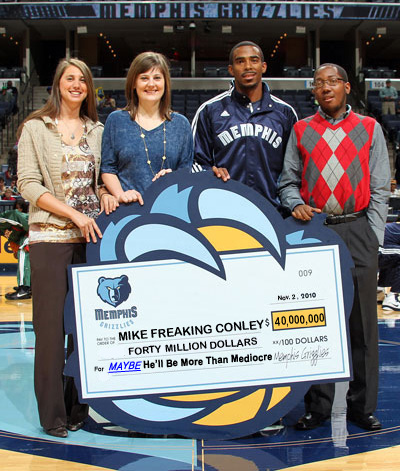 The relationship between the NBA and the NBA Players Association is a tenuous one, to say the least. For those who don’t know, they have been in negotiations concerning the league’s Collective Bargaining Agreement (CBA), which expires after this season, but can be extended an extra year if they agree to it by December 15.  Negotiations are strained because the Commissioner David Stern and the NBA owners are clamoring for smaller contracts with players, in both the total monetary value and the length, citing huge financial losses, which David Stern thinks will be up to $400 million by the All-Star break. The owners say that they’re losing money despite spending their money in a mostly responsible fashion.  Meanwhile, the Players Association thinks things are fine the way they are and even want the minimum contracts to get a small increase. Needless to say, the two are not meeting eye-to-eye.

The thing that I can most compare this to is a high stakes game of Jenga. Let’s pretend that the blocks are NBA contracts. As the game goes on, the stakes get higher and higher. Good contracts are blocks removed with ease while bad contracts are ones that shake the whole tower.

Early in the offseason, David Kahn gave Darko Milicic a four year, $20 million contract. This would be equivalent to the idiot who removes a difficult piece and the whole tower struggles to remain intact. But everyone laughs it off because, hey, we know the guy is just a nimrod and besides, the stakes aren’t very high yet; there’s plenty of time to negotiate.

More time goes by and the stakes grow. The Jenga players grow nervous as Joe Johnson gets the max deal. They grow even more nervous as Amir Johnson gets $34 million over 5 years. These block pulling decisions are hard to swallow. The owners are not spending their money responsibly at all. But at least they are somewhat defensible. David Kahn is an idiot, Joe Johnson is an all-star and New York probably would have given him the max. And no one was really aware of the Amir Johnson deal.

But time passes, the season starts and wouldn’t you know it? It’s time for the 2007 NBA draft picks to sign extensions. Joakim Noah had already signed a big one in the summer, but that’s okay because he’s a great talent. Horford signs a five year, $60 million extension, which is another acceptable move since he’s a very good big man on both sides of the court. Old Bobcats fan favorite Jared Dudley, gets a deal for five years worth $22.5 million. That’s fine too.

At 11:55 p.m. on November 1, there were only 5 minutes left before time expired to give the 2007 NBA draft picks a contract extension. And then news broke that Mike Conley Jr. had signed an extension for five years, $40 million with incentives that could earn him an extra $5 million to boot.

The Jenga tower looked like it was coming down.

I’m worried that this could be one of the major pieces to foreshadow an upcoming lockout somewhere in the future. NBA owners have been saying that they’ve spent their money wisely and responsibly in dealing contracts to players. However, this flies straight in the face of that argument.

The one thing that can save this Jenga tower is that perhaps Mike Conley truly is better this season. He may not be worth $40 million, but at the production level right now, it’s less of a stretch than earlier thought.

If Mike Conley does not keep up his stellar performance this season, it could have wide-reaching effects, possibly screwing up the NBA pay scale. How many players can say, “Hey, I should get at least what Mike Conley got! I’m much better than he is!” ? More than I’m willing to count.

But does this really foreshadow a lockout? I’m not sure. I don’t know how the owners see this. I assume they either laughed or smacked their foreheads after hearing the news. Either way, it looks like their best argument in the CBA negotiations is likely tarnished unless Mike Conley really, really steps up his game. And that tends to make me wary when it comes to thinking about the NBA and the players association trying to agree on terms for the next CBA. Regardless, I’m much more worried than I was before Conley inked his deal.

But it gets even worse for Grizzlies fans. This deal totally precludes them from re-signing Marc Gasol, one of the best centers in the league, and O.J. Mayo, a great young talent, unless Heisley is willing to spend over the luxury tax. And how likely is that for a team that ranked 28th in attendance last year and 27th this year? On the plus side, this could make Mayo and Gasol available for the right price.

3 thoughts on “Mike Conley and the Jenga Tower”