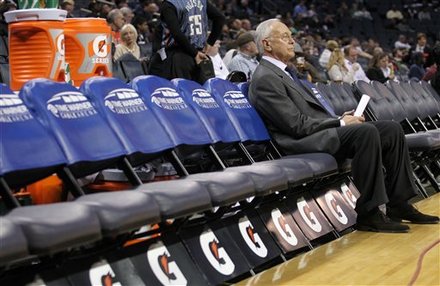 “I wonder if I can get a coach’s discount on beer during this game.” (AP Photo)

In this Tuesday, Dec. 21, 2010, photo, Charlotte Bobcats coach Larry Brown watches his team warm up for an NBA basketball game against the Oklahoma City Thunder in Charlotte, N.C. After a miserable start to the season in which he took shots at his players and himself, Brown is out as coach of the Bobcats. Owner Michael Jordan announced the move in a release by the team on Wednesday. (AP Photo/Bob Leverone)