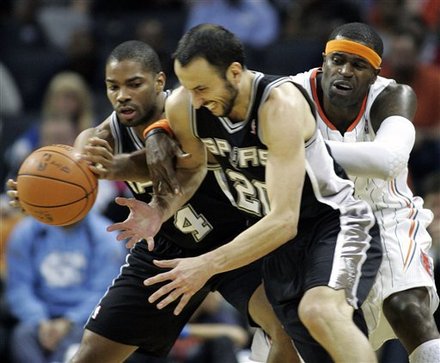 Oh, to be a Spurs fan.  Year after year of professional execution on and off the court: drafting top European talent in later rounds, finding NCAA collegiate castoffs, under-paying for overlooked role players and retaining homegrown stars.  It was that dedication to excellence, to the minutia of the game, that defeated an otherwise solid effort by the Bobcats 95-91 Monday night in Charlotte.  ‘Cats fall to 1-6, Spurs move to 5-1.

Yeah, the Bobcats are 1-6 but I’m still not panicking.  One through twelve, the roster has never been as solid and I have to believe that Brown and MJ are working the phones to upgrade the PG position soon.  Nothing against D.J. — he’s doing as well as we could have hoped — but he’s simply not the long term answer at the most important position on the floor.  ‘Cats are much better than their record and I fully expect them to make the Playoffs come April.

Until Next Time…Enjoy the Loss Bobcats Fans,

3 thoughts on “Veteran Spurs Too Professional for Bobcats”