Michael Jordan bragged openly last month that the team had acquired the League’s “most valuable contract” when they sent bust Tyson Chandler to Dallas in return for Erick Dampier and a couple of overpaid 12th men.  How valuable exactly?  MJ and GM Rod Higgins will have at least another month and a half to mull over the decision as they wait the mandatory 60 days before Damp, Eduardo Najera or Matt Carroll can be traded again in a package.

So what will they do with all of this “value”?
In order to answer the question, we need to first look hard at the team’s present situation.

Capped out? How about taxed out. At the moment, the ‘Cats have around $78 million in salaries committed for next season. This when you factor in Tyrus Thomas’s new contract, Damp’s expiring, Shaun Livingston’s (reported) two year deal and Gerald Wallace’s $1 million All-Star and All-defense bonus. Any move that the Bobcats make with Dampier must address the financial issue first and foremost. As competitive as MJ is, he’s not going to pay luxury tax money on a fringe Playoff team that’s still losing millions.

The only way the ‘Cats are going to gain any traction in Charlotte is by winning, and a single first round Playoff exit isn’t going to cut it. MJ will need to build a perennial winner, if not contender, in order to lure in a broader audience. Right now, the Bobcats lack a true starting point guard and are thin at center. The Bobcats will need to both address the team’s financial situation and improve the product on the floor.

DAMPIER SOLUTION PART ONE: WAIVE HIM

Waiving Dampier before training camp would clear over $13 million from the team’s books, bringing their current payroll figure down to a manageable $65 million. Not an ideal cap situation but the move would at least give the organization some breathing room in taking on a little salary in a trade or in signing a few street free agents for depth.

The team could then fill their starting point guard void by making a trade with, say Cleveland, using Nazr Mohammad’s expiring contract and D.J. Augustin in a Cavs salary dump. The Cavs seemed more than just a little excited about acquiring Ramon Sessions last month and moving Mo Williams for cap flexibility and a young PG prospect could be the best offer on the table.

To fill out the center rotation, MJ and Higgins could attempt to re-sign Dampier to a one or two year contract at less than $5 million per season (unlikely). They could also dangle Boris Diaw to a team like the Knicks to bring back a center or more cap space.

A Knicks trade would unfortunately return Eddy Curry (expiring contract) in exchange for Diaw and either Carroll or Najera. Now would be a good time for me to explain that I’m not writing about what I’d like to see, but rather what is most likely.
The ‘Cats have shown an unhealthy interest in Curry over the years and it wouldn’t surprise me if they made this move. A center platoon of Curry and Gana Diop sounds absolutely terrible and it probably would be but both of those players have complementary skill sets if either is up for putting forth an actual effort.
Though it is noteworthy that Curry has played a total of 74 minutes in the past two NBA seasons.

Another possible destination for Diaw would be Golden State, given Higgins (now limited) connections there and Don Nelson’s (if he returns) love of the small ball. Perhaps Higgins could manufacture a Diaw / Andris Biedrins swap? Biedrins is very much on the trading block but the Bobcats would have to be certain that a somewhat undersized 24 year old Russian, who’s owed $36 million over the next four seasons is the longterm answer in the middle.

In this scenario, the Bobcats would be safely under the League’s luxury tax for the next three seasons (albeit capped out) with the ability to sign a couple of veteran minimum free agents (see Flip Murray, Stephen Graham) as needed for injury replacements/depth. 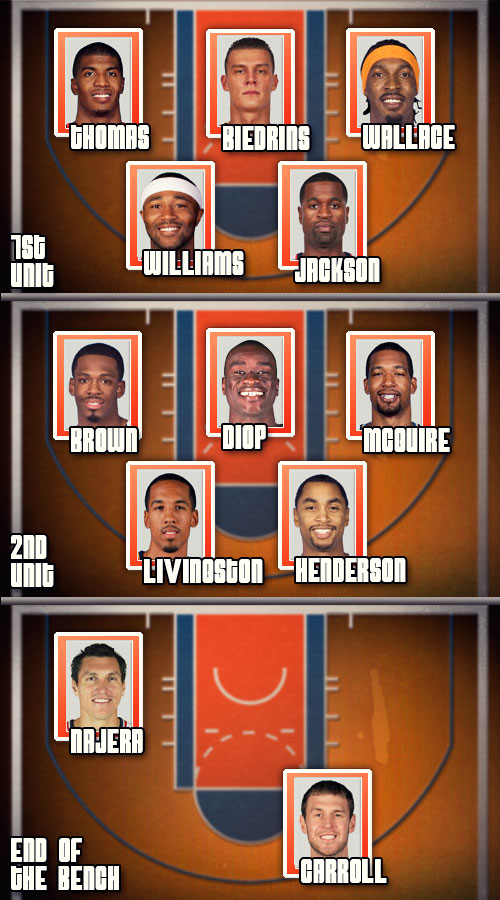 So basically we’re taking a 44 win team and replacing Diaw, Raymond Felton, Augustin, Chandler and Mohammed with Biedrins, Mo Williams, Shaun Livingston and a full season of Tyrus Thomas. At the very least, the team should replicate their ’09-’10 success and could possibly build on it as Williams’ consistent shooting and Playoff experience will slightly upgrade the point guard position. A Biedrins/Diop platoon could work well against the majority of the League’s centers (outside of maybe Dwight Howard and Yao Ming) and Livingston is a massive upgrade at the backup point.
The key factor here is Tyrus Thomas. He and Diaw are completely different players. Diaw was an unheralded on-the-ball defender who could occasionally explode for 20 plus points per game while extending the defense with his three point shooting. Tyrus works more like a taller Gerald Wallace, grabbing rebounds, blocking shots and relying on either put-backs or a steady fifteen footer for his offense. If Coach Brown can do for Thomas what he did for Crash, Bobcats fans will be in for a quite treat.

Until then, Enjoy the Offseason Bobcats Fans.