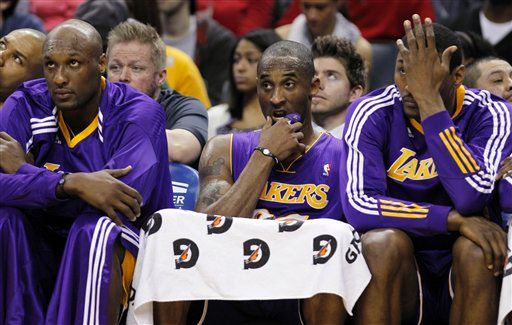 The Charlotte Bobcats defeated the Los Angeles Lakers 109-89 on Monday night at the Cable Box; the Cats have now defeated the Lakers 8 out of the last 10 times the two teams have played.  Gerald Wallace led the Bobcats with 20 points and 11 rebounds; Gerald Henderson added 18 points (6-9 FG, 5-5 FT), 4 rebounds, 4 assists and 2 blocks off the bench.

The deck was stacked against the Lakers to start: they were finishing up a long road trip AND on the second night of a back-to-back; plus, Kobe was under the weather.  After a bit of a slow start, the Cats took advantage, building a six point lead to take into halftime.

The wheels really fell off for the Lakers late in the third.  With a laboring Kobe on the bench, the Cats went on a 14-3 run, capped by a 15-foot jumper and a short hook shot by Kwame Brown and a three pointer at the buzzer by Gerald Wallace, for a 78-60 lead after three.

The barrage continued with Kobe and the Lakers starters back on the court to start the fourth, this time headed by Gerald Henderson and Nazr Mohammed, who both appeared to be unguardable for the exhausted Lakers.  The Bobcats led by as much as 28 a couple of times before the benches emptied.