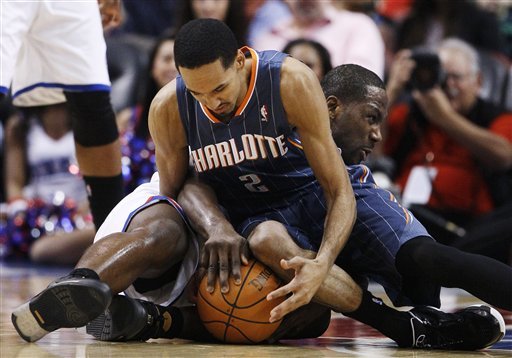 Bobcats Lose A Close One In Philadelphia

The Charlotte Bobcats traveled to Philadelphia to take on the 76ers in a mid-day MLK Day game. The match paired two of the most unimpressive teams of the Eastern Conference, both putting  on out-of-rhythm performances for long stretches. Each team tried their hardest to lose this game, but the Bobcats were finally able to hand it over to the home team in overtime. The suspension of Tyrus Thomas for “throwing ‘bows” during Charlotte’s last game may have been one factor to aid Charlotte to this loss to Philly 96 – 92.

The Bobcats had a bit of trouble getting things up and running early in the game. The 76ers worked to entertain their crowd with steady offense at the onset, making all of their shot attempts for the first 4 minutes. The Cats hung around, but were forced into taking a lot of outside shots that would not drop for any of the starters. Boris Diaw showed solid defense and pretty efficient shot selection during his early minutes. Interestingly, Kwame Brown was the best offensive option that Charlotte had in action. The team’s two captains, Gerald Wallace and Stephen Jackson just didn’t seem to work out against Philly’s defensive scheme. Wallace was nearly invisible until Jackson went to the bench at the end of the first quarter. At that point, Crash took it straight to the basket on consecutive drives for easy points.

Neither team could hit a shot in the second quarter. Stephen Jackson replaced Wallace and stunk it up for the rest of the half. Pennsylvania-native, Gerald Henderson showed little effectiveness and the rest of the Bobcats couldn’t find the hoop despite their efforts (Shaun Livingston did show some hustle, but without buckets). It seemed that the Bobcats were absolutely stymied on offense without Boris Diaw on the floor. We’ll need a real “X’s and O’s” type to ascertain what the 76ers were doing against the Cats. My guess is that the team relies on Jack to bail them out of such ruts, and he just didn’t have anything going for him during most of the game. Still, the teams went back-and-forth and Philly held a 1pt lead going to end the half. It could have been much worse considering that the Bobcats had shot 0-10 from behind the arc.

The Bobcats came out on a tear to start the third (which is not quite how they usually roll). Boris Diaw stayed hot with two 3-pointers to spark Charlottes 13-2 run. Every Bobcat on the floor contributed during the run, except Stephen Jackson who went scoreless for the quarter. Of course, the Cats went back to playing their style of 3rd Quarter basketball and let the 76ers back into the game. This was possible due a streak of 10 straight misses and nearly 10 minutes without a field goal. It was if Larry Brown was haunting the team from his old office in Philadelphia. Again, the team struggled with Boris getting rest on the bench. While Charlotte needed someone to step up on offense, they only got Captain Jack to miss a load of shots and throwaway two turnovers to close the period.

The 76ers started the 4th Quarter by owning the paint on offense. The Bobcats had no ability to stop Louis Williams as he tore through their defense for 21 second half points. DJ Augustin just couldn’t handle the larger Williams, and couldn’t knock down shots to make up for it. Augustin and Jackson appeared just about useless for much of the 4th. The game was close to being out of reach with Philadelphia holding a 9 point edge with less than 5 minutes left. But suddenly, Kwame Brown came to the rescue. Well, it was actually Elton Brand’s arm to Kwame’s face on a close lay-up that did it. Brown hit the shot attempt and the free-throw. Brand was called for a flagrant and the Cats used the possession to set up Boris for a straight-ahead 3-pointer. The momentum swung and Charlotte held control of the game until the final seconds.  Matt Carroll (another Pennsylvania-native) knocked down 2 free-throws to give the Bobcats a 3 point lead with less than 10 seconds, and it seemed like the road win was sealed. Unfortunately, Louis Williams wasn’t done and hit a game-tying 3-pointer from the corner with 4.7 seconds left. Charlotte used their final timeout to setup the old pass-it-around-to-Stephen-Jackson-for-a-long-range-miss play and executed it with precision. So, the folks in the arena caught a little bonus basketball and had to put off dinner for another half-hour.

Early in the extra period, the Bobcats worked on rookie Evan Turner with Boris Diaw and Stephen Jackson. Once that well was dry, the teams seemed to counter each other with blows until the final minute. In the meantime, Boris Diaw notched his first triple-double as a Bobcat and Kwame Brown pulled down his 16th rebound of the game. Still, the great stats just couldn’t add up to a win. With just under 40 seconds left, and the game tied, Andre Igoudala hit a pull up jumper over Kwame to give the Sixers a two point lead that wouldn’t fade as the home team finally got the win over the visiting Bobcats 96-92. In the case that these two teams are tied for the final Playoff slot, Philadelphia will hold the tie-breaker advantage with this win over the Bobcats. From what I recall, the Bobcats have also lost the tie-breaker to the Bucks.

To start the televised game broadcast, Dell Curry let it slip that he had just downed a 5-Hour Energy and 2 cups of coffee. In no way did I ever think DC had such a need for uppers. Also, in no way did any of those chemicals speed up his Southern draw.

Thaddeus Young had a horrible game trying to finish around the rim. He missed two dunks, had one blocked, and missed two lay-ups. He was pretty bad at the free-throw line as well.

Kwame Brown had another really good game (15 pts, 16 reb, but a crucial turnover). It’s tough to get overly-excited when the team isn’t winning, but this guy might be a pretty good value. The television crew mentioned an instance during a recent practice when Asst. Coach Charles Oakley really got into Kwame’s face. It’s nice to see him react with a performance like this. At the end of the season, we’ll need to evaluate which player was a better addition between Brown or Livingston.

Nazr Mohammed seems to be back to form… and that form is of a backup Center for a mediocre NBA club.

During the broadcast, I spotted a Mini-Shelden Williams sitting on the front-row near the Bobcats bench. If you watched the game on Fox SportSouth, you know who I’m talkin’ about.

Boris Diaw’s triple-double (25 pts, 11 reb, 11 ast, 1 turnover, 2 blocks) would have been a lot more fun to jot down had the Cats pulled out the win. Still, it’s nice to see the Frenchman display his full range of skills on the court. That stat line is crazy!

The Bobcats have a rematch with the 76ers in Charlotte on Thursday. Let’s hope for revenge!

2 thoughts on “Bobcats Find A Way To Lose To Philly”