At first blush, Boris Diaw is not the all-around good player he was once thought to be. After being traded to Charlotte in December of 2008, he flourished while putting up nice stats, including 15 ppg on 50% FG and 42% 3P with 5 apg and 6 rpg. But after that season, his play declined, partially due to the Stephen Jackson trade which eliminated some of his value. It seemed that with the pressure to score lifted, Diaw mentally shrugged at the idea of scoring and even being aggressive. He didn’t work as hard in the paint, taking about three fewer shots per game than the previous season but still taking the same number of three pointers per game despite dropping nearly a full ten percentage points in shots from downtown.

But most of all, he was inconsistent. However, this was still the Larry Brown era so as long as Boris played solid defense at just about any position, it didn’t matter. He was going to start every game, which he did. But while his defense was strong, his offense was, as mentioned above, inconsistent. His shooting was off and on and for the most part, he just seemed… out of it. Bobcats fans deemed him ‘nonchalant,’ which is an apt word to describe him. He’s not the Stephen Jackson or Gerald Wallace who basically wear their emotions on their sleeves. But then again, he doesn’t have to be. It’s just who he is. The fans who get upset that he doesn’t show emotion are also the ones who say things like, “Diaw doesn’t care.” While he doesn’t have the athleticism to have the chase-down blocks like Crash, nor the outward emotion, but that doesn’t mean he doesn’t care, as some people infer. He just needed to play with more aggression.

When news broke about the new head coach and assistant coach, I was very interested to see what would happen to Diaw. Silas and Oakley both were very good power forwards (emphasis on the POWER) during their respective NBA careers with both averaging about 10 rebounds per game for their career. Obviously, Diaw, an unorthodox PF, doesn’t really fit that mold that Silas and Oak had and probably would prefer. While a trade seems like an obvious solution, I much preferred to see how the new coaching staff would develop Boris’ post play and rebounding. Although it is still early in Silas’ interim coaching tenure, I think 12 games are enough to make some analysis.

So far, I’ve seen marked improvement in Diaw’s aggressiveness on offense, specifically in the paint. He used to get the ball in the post, make a three quarter-assed attempt to muscle into the paint before kicking out to a teammate. Now he’s just so much better. He’s become more assertive and in the post, utilizing spin moves, his underrated baby hook and just plain using his behind and forcing himself into the pain. And yet, his scoring average in the Silas Era (S.E.) has not improved over the Larry Brown Era (L.B.E.). But that’s just fine! In the first six games in the S.E., Boris only had one game where he took more than 10 attempts from the field. Since then, he’s had five of six games with field goal attempts in double digits. While Boris’ FG% has marginally decreased in the S.E., I’m not concerned if he takes 10+ attempts. Why? Because he’s not taking shots from Augustin, so these extra attempts are Stephen Jackson’s or Gerald Wallace’s, which is fine by me as Diaw is more efficient on offense than either of them, unless Jackson has one of those games (COUGHnearfortypercentfg%COUGH). Oh, and I guess it’s worth noting that Diaw is getting to the line more often and hitting a MUCH better percentage of his free throws. Anyway, so color me tickled pink about Boris’ newfound aggression on offense.

As for defense Boris has been fine, as usual. Against Memphis, he helped hold Zach Randolph to 15 points on 17 attempts. His main struggles so far have been with David West and Carlos Boozer (pre-injury). Eh, that stuff doesn’t worry me too much. Boozer was averaging near 23 points anyway.

But where Boris has really improved since Silas and Oakley, et al. began working with the team, is rebounding, assists and limiting turnovers. Believe it or not, according to Queen City Hoops, the Bobcats pace has not sped up under Silas, as he had said at the beginning of his tenure. What this means is that Boris isn’t getting more rebounds just because there are more rebounds to go around. Diaw is averaging a little over a rebound more per game more than with LB as head coach. What’s more is that that extra rebound is mostly offensive rebounds, which means the Bobcats are getting another possession on offense. As for assists and turnovers, this is less of Boris’ development than Silas’ offense development from Brown’s anemic, umm… “non-defense.” Silas has allowed the young players to become comfortable, notably Augustin and Henderson, who are both getting more time than ever. Whereas Larry Brown would berate D.J. until a puddle of urine formed around his feet (kidding!), Silas is taking the “catch more flies with honey” approach. And while there are setbacks and stumbles along the way, they’re making much more progress than Larry Brown was. But I digress. Anyway, Silas has the team playing more efficiently – though that’s not saying much. Whoever gets an open look better take it, in short. So when Boris drives and pulls a second defender, he can easily find Augustin or someone else spotting up for a shot. Bingo, more assists. And because the players aren’t afraid to shoot anymore, the turnovers that result from extra, extra passes are phased out for the most part, eliminating a full turnover per game for Diaw.

And all this improvement is mostly coming from the last six games. As a Bobcats fan, of course I hope his play continues to get better, but more than that, I hope that this indicates how well Silas and Oakley are coaching and instructing players on improving the game’s fundamentals. 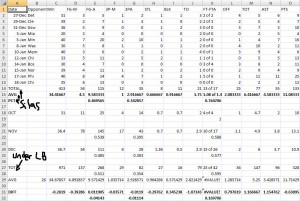 Click once, and then again on the following page to enlarge

3 thoughts on “Boris on the Rebound?”