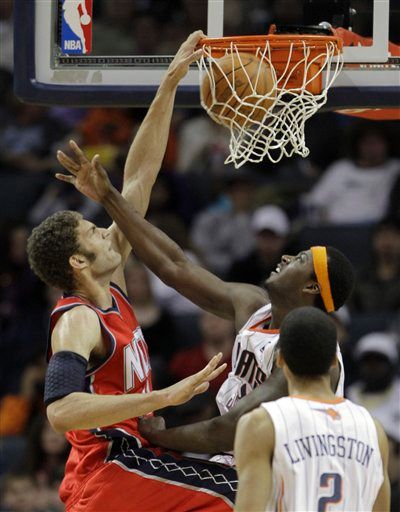 The Charlotte Bobcats were outplayed by a dreadful New Jersey Nets team in a 94-89 loss at the Cable Box on Friday night.  Brook Lopez led the Nets with 31 points and 11 rebounds.  The Bobcats were led by Stephen Jackson with 21 points and Gerald Wallace with 20 points/9 rebounds.

The Nets snapped a 12 game road losing streak by leading wire to wire over the listless Bobcats, who appeared to be waiting around for a spark that never really came.

The Nets lead by as much as 18 in the third quarter before a half-hearted fourth quarter comeback by the Bobcats cut the lead down to four with just over three minutes left.  But Devin Harris scored 5 points and assisted on another bucket over the next 90 seconds for a quick 7-0 Nets run that put the game away.