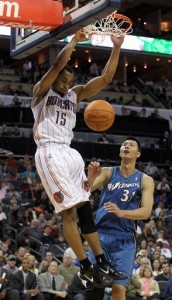 Gerald Henderson put on a show on Saturday, doing just about everything (AP Photo/Bob Leverone)

Again without co-captain Gerald Wallace, the Bobcats took revenge against the Washington Wizards for the previous 33-point loss with a 104-89 win led by Gerald Henderson’s 19 points. And in perhaps the most awesome stat of the young year, four of the five Bobcats’ starters nearly all had a double-double with Henderson and Augustin coming up short by one rebound and one assist, respectively.

Although Tyrus Thomas had a rough game as he battled the Flu and a healing minor knee strain, this game seemed to say that Bobcats fans should be proud of the young core that’s developing under Paul Silas’ watch. D.J. Augustin led the team in assists with nine and as mentioned above, Gerald Henderson was outstanding on both sides of the ball. This isn’t to say that the older guys didn’t play well. Stephen Jackson had a rough shooting night but poured in 21 points and Boris Diaw had an efficient though casual night, with 11 points on 5-8 shooting. Augustin also added 20 points on 6-11 from the field.

Enjoy the win Bobcats fans. Next up is the Memphis Grizzlies. I think we’ll be OK as long as we don’t beat O.J. Mayo in Boo-Ray.