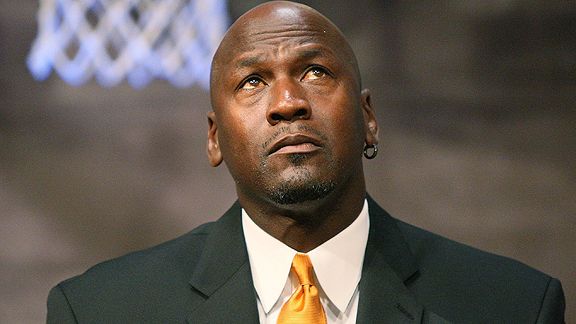 Decertification, Ultimatums and BRI. Not exactly the sort of basketball news you’d expect to be reading about in October. The Great War of Billionaires vs. Millionaires has moved on to the next stage, a nasty PR nightmare with a potentially nastier outcome: A LOST SEASON.
I say bring it on.

Our own resident team owner, G.O.A.T. and Global Icon Michael Jordan, has over the past week been cast as the quintessential hardline antagonist — the Severus Snape, turning against his own at Hogwarts. He’s been subsequently made the media’s whipping boy as he dared turn his back on the players in search of greedy profits…“MWUA-HA-HA!”

Too bad because MJ is absolutely, positively right on this. This is Anti-Kwame Logic. Anti-AMMO. He should be applauded for his perseverance and foresight. He should be celebrated. But he’s not. Let us look at the reasons why…

PART I: The Lost Boys.

A quick list of those effected by a potentially LOST SEASON:

1. The Fans. NBA basketball is great. I love it. I’ve devoted a ridiculous amount of hours in my life to it. From Tripucka to Biyombo. From Salt ‘N’ Peppa on Inside Stuff to salt and pepper in my beard. I sometimes write about it. I don’t get paid a dime. In fact, I spend a chunk of my income just to catch the games. I’m like a lot of you out there. Busy with life, goals to be achieved, work to be done. Watching hoops is a great cherry on top at the end of the day during those dark winter months. But that’s it. It’s just the cherry. The whipped cream, nuts, fudge, and two scoops are still there. We will find other cherries during a lost season.
VERDICT: MINIMAL EFFECT.

2. The Owners. This a diverse group ranging from ultra-achievers like Mark Cuban to professional scumbags like Donald Sterling. Two major things in common: WEALTH and NON-BASKETBALL RELATED INCOME. The outside income also brings outside interests. These guys love basketball, sure, but they didn’t achieve this level of wealth sitting on their asses waiting for TNT Thursday Nights. Even Jimmy Dolan has to run a massive telecom business. They have plenty to keep themselves occupied with and financially comfortable during a lost season.
VERDICT: MINIMAL EFFECT.

3. The Players. So let me get this straight, Kevin Garnett marches into a safe, public environment (conference room) and stares down slash yells at people who he knows won’t fight back? Hmmm…KG would never do that on the court now, would he?
For every KG or Kobe or Paul Pierce — guys who’ve pocketed near or over nine digits during their playing careers — there are ten times as many Stephen Grahams, D.J. Whites and Kemba Walkers. Guys who haven’t struck it rich on a big contract or, in Kemba’s case, haven’t been paid a dime. Unless Garnett, Kobe and Pierce start handing out game week checks to all of the other players who pass them the ball then I doubt there’ll be a happy players coalition for much longer.
VERDICT: MAJOR EFFECT

4. The Agents. Blll Simmons brought this up a few weeks ago and nobody else picked up on it (for reasons I’ll get to soon enough). The agents get paid on percentages. A lower BRI percentage combined with a “flex cap” results in agent fees going down. Top that off with an end to sign-and-trades with limited Bird Rights and agents lose BIG in what would amount to an INVERSE Tony Montana Equation: “First you lose da money. Chu lose da money, then you lose da power.”
The halcyon days of agents strong arming teams into dealing or signing players? Long gone friends. If Stern, Jordan and company are acting to neuter the agents in order to prevent a MLB Scott Boras situation from ever occurring, then I stand and applaud. NEWSFLASH: Agents do not act in or care about the best interest of the fans (aka NBA’s customers). Starve the leeches gentlemen.
VERDICT: MAJOR EFFECT

5. The Media. This, folks, is the wagon driving the cart. The guys who cover the NBA for a living, many of whom I admire, are ABSOLUTELY dependent on the NBA playing a season. These guys make less than Stephen Graham. They have mortgages. They have families. Their future prospects are wholly dependent on how popular the NBA is. They don’t want the season to be cancelled and in some cases, can’t afford for it to be. Their employers could potentially furlough them without pay. The overextended could find themselves in financial ruin.
While this is very sad and I do feel for these individuals, I can’t help but wonder if their own circumstances have colored their reporting. We should keep this in mind as we read the news coverage.
VERDICT: MASSIVE EFFECT

Cancel out all the noise and you can find the lockout’s seminal question: “Is the NBA a business or is it not?” The owners put up the non-guaranteed capital at a risk and in turn receive a profit or are burdened by loss. The players guaranteed salaries are wholly dependent on the Association’s infrastructure to package and deliver the basketball product. Without a majority of the world’s best players, the NBA could no longer charge for a world-class product. They must strike a healthy balance between operational cost and product quality. Simple.

The fundamental difference between the two sides is that the players don’t see the Association as being a business but as a “Mega-Agency”. They conveniently forget that agents take money off the top and are paid regardless whereas the Association must generate all income with little to no guarantee of profit. They run a business, the players are professional salarymen. The risk/reward ratios are currently unbalanced. MJ and the other hardline owners want to stand pat until the balance is within reason. Of course not all owners are created equal. Some of the mega-rich see their teams as luxury yachts to be flaunted. Still, in the end, we are dealing with businessmen and while they may be accused of being greedy, they aren’t stupid and will thus tweak the Association’s business model until it becomes financially sustainable and financially attractive for all.

Ultimately, the owners will win this War and the NBA will be much different because of it:

Sit tight Bobcats fans and don’t believe the hype, a Lost Season may hurt short term but long term could elevate a marginal domestic business into an international phenomenon that will yield terrific results for everyone involved.

9 thoughts on ““Michael Jordan is a sellout!”, The Lost Season and Other Thoughts on the NBA Lockout”