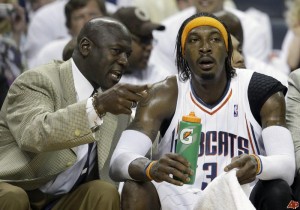 Although we’ve seen a lot of huffing and puffing recently from Bobcats fans and local media, the team’s latest stretch of road beat-downs and lackluster efforts shouldn’t be so hastily bundled into last month’s Gerald Wallace salary dump (cue Abraham Lincoln voice) “for this was their path all along.”

You see, there’s a very good reason why the Charlotte NBA franchise dropped five consecutive road games to solid Western Conference teams and that reason is that the Bobcats aren’t very good. They aren’t good without Gerald Wallace and they weren’t good with him. They were simply adequate.

“But they were tearing up the league once Sugar Bear Silas took over,” you contend. Yes, they were putting notches in the win column but the vast majority of those wins came against the lowliest of Eastern Conference opponents and most of the quality victories came at home. To “beast it” in the Association, a team must be able to not only beat good teams at home but also occasionally on the road and, most importantly, must do both of these things consistently. *

Combine the Bobcats lack of talent with the early season Larry Brown-orchestrated funk, the loss of Tyrus Thomas and the unexpected lights-out play of Philadelphia and Indiana and you can see why Michael Jordan pulled the plug. A seasoned gambler looking at these Playoff odds would fold and wait for the next hand. That’s exactly what MJ has done and while it might not be pretty now, the ‘Cats are in a much better position long-term to be relevant.

-It’s been a pleasure watching Gerald Henderson go through the ups & downs of a young starter. Some nights the guy looks like a keeper and on others he looks rather lost. His jumper is still not as consistent as it needs to be and I’m hoping that he and his family enlist a specialist to work with him on the skill during the summer. The athleticism that Henderson leans on so much now won’t be there in six or seven years. Hopefully Gerald fulfills his potential as a Kobe-lite by rounding out his skill-set over the next few offseasons.

-I don’t think it’ll be too difficult finding a taker for Boris Diaw’s expiring contract if he puts up a few more performances like the one he did against the Clips last evening. My gut (pun intended) feeling has always been that Boris is simply bored with Charlotte and the systems in place. He’d be much better off in a more metropolitan city. Moving him this summer (along with one of the first rounders acquired in the Wallace trade) would put the Bobcats in the position to take on a max-level star via trade or signing for the first time in a very long while.

-In my opinion, Jordan’s rebuilding plan was hinted at the day the team extended Coach Silas’s contract for next season. It was a clear move to the coach that the blame for the team’s struggles wouldn’t be placed exclusively on his shoulders. Unless the ‘Cats can recruit top notch talent to come to Charlotte this summer, the team will most likely struggle for another season as they build their young nucleus of players for a successful run in ’12-’13.

*Let’s go ahead and call it “The Dallas Test.” The day that the Bobcats go into Big D and scalp the previously unscalpable Mavericks easily on the road, they’ll have made the jump. Until then, they’re either bad or not good enough.

10 thoughts on “Waiting for The Next Good Hand”