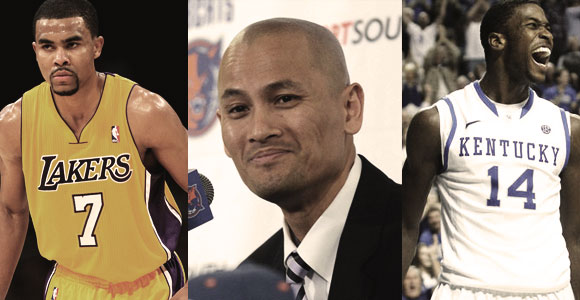 Rich Cho has been one busy dude. Just three months after wrapping up a seven win throwaway season, the Bobcats general manager/internet phenom has executed a massive upgrade of the roster. How and what has he accomplished? Let’s have a quick recap:

Cho swung a pre-draft deal with former Executive of the Year/Chad Ford Idol Joe Dumars, sending oft-injured SF Corey Maggette and his expiring contract to Detroit in exchange for sharpshooting guard Ben Gordon and a future first round pick.

The aforementioned Mr. Ford panned the trade, questioning why the Bobcats were taking on Gordon’s extra year of salary. He failed to mention the fact that Cho copped a lightly protected draft pick and a better player out of the deal. As John Hollinger pointed out, the Bobcats NEED to add contracts over the next few seasons just to hit the league’s salary floor.

RESULT: Bobcats clear up SF spot, gain a potent 3pt shooting/scoring machine off the pine, add yet another extra first round pick to the vault.

The Bobcats surprised everyone yet no one when they selected the second highest rated prospect with the 2nd overall pick in the draft. Kentucky’s Michael Kidd-Gilchrist immediately steps into the team’s starting lineup to provide lockdown defense, transition buckets and good vibes. Everyone seems to love the kid and if his first Summer League contest was any indicator, MKG might go down as the best selection in the team’s brief history.

With the first pick in the second round, Cho selected Vandy’s Jeffery Taylor, a sharpshooting swingman whose athleticism and on-ball defense all but guarantees him a spot in the rotation.

Let’s start with what the organization didn’t do. Eduardo Najera and Boris Diaw finally came off the books, freeing up around $11 million in cap space. D.J. White was not extended his qualifying offer of around $3 million and is likely finished in Charlotte. Derrick Brown was extended a $1 million qualifying offer but with the way both draft picks have played thus far in Summer action, I could see that offer being rescinded soon. Finally, D.J. Augustin was let loose after several failed sign & trade scenarios.

With this sudden influx of cap space, Cho inked Ramon Sessions to a two year $10 million deal, won the Brendan Haywood amnesty bid at $6.15 million over three seasons and has just enough juice left over (via cap exceptions or amnesty) to sign a veteran PF (Kris Humphries or Carl Landry).

RESULT: Sessions provides an immediate upgrade as a big backup to Kemba Walker while Haywood gives the Cats an inexpensive option to go big and experiment with Bismack Biyombo at the four.

GRADE: Incomplete. Cho isn’t finished. If Humphries or Landry signs, give him a solid “A” for addressing need with value.

It’s July and Mike Dunlap has coached all of two Summer League games but the buzz is undeniable. This guy is here to bust his tail developing prospects into players. The approach is inspiring and hopeful. This could be the rare coaching change that significantly upgrades the win/loss columns.

RESULT: Cho & Rod Higgins found their man. We’ll reserve judgement until the games start to count but thus far Bobcats fans have to be excited about Dunlap’s potential.

Armed with few assets outside of the draft, Cho found a way to turn Najera, Augustin, White, Maggette and Brown into MKG, Taylor, Gordon, Sessions, Haywood and (potentially) Landry. This is a significant talent upgrade. Combined with the development of last year’s young players and a new coaching philosophy, this team should surprise a lot of people come November.