It’s been a few days since we’ve heard much from the Bobcats, but it looks like they’re ready to cough up some info about their upcoming season. While they’re tasked with determining how to best utilize the No. 2 pick in this year’s NBA Draft, a couple of other jobs have kept the team busy for the summer.

First Up – a New Coach

After loads of rumors about high-profile or somewhat recognized names coming to Charlotte to take charge of this dreadful roster for next season, the Bobcats went and did something that no one saw coming. They hired Mike Dunlap. Like just about everyone else, I don’t know a thing about this guy. But, I can assume that he works cheap and he’s got patience for young guys that might not “play the right way.” It’s pretty clear that this is a cost-saving move, but there’s no reason that the Bobcats should pay top dollar for a head coach, when they’ve got a roster that’s closer to the D-League than the Playoffs. If Charlotte’s going to tank the 2013-14 season (which seems to be the plan), you can’t blame the team for rolling the dice on a guy with a little potential and could bring some new blood into the league.

The Bobcats are going to be loaded with young players, so a coach with an understanding of both the college and pro challenges should be helpful to the development of a lot of these guys. Let’s just hope that Tyrus Thomas doesn’t look to Mike Dunlap for tips on bulking up this summer. 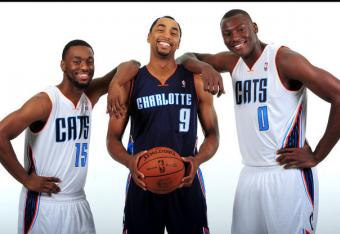 The Bobcats or Cats just unveiled their new game uniforms. It’s not much of an impressive upgrade. The Charlotte Observer reported that Michael Jordan wanted some Carolina blue involved in the team’s palette. Can we credit him with slapping on some lettering of awkward proportions, applying a good deal of inconvenient negative spacing, and shortening the team’s nickname in order to improve the team’s brand and sell merchandise?

I definitely don’t see this as a step forward for the team’s image. How many times are they going to try to change their jerseys? It only makes me agree more with the grand rebrand scheme that fellow Baseliner A.S. Chin has suggested. In theory, we’re to believe that the Bobcats are trashing their roster, burning it to the ground so that they can build it back up with little tying them to past mistakes. Why wouldn’t the team do the same thing with their brand identity? The club is making a half-hearted effort to give it one more go as “Cats” and let folks fully detach from the organization’s name. Strategically, this looks like they’re dumping “Bobcats” and I can’t imagine anyone is gonna fall in love with this new “Cats” thing. So, what choice will the team have but to bring the buzz back? Teal, white, purple, and a cartoon bug with shaky wings. You’ve got to admit that these proposed Hornets uniforms look much better than what MJ & Co. just rolled out.

After analyzing the data and trying to ascertain just exactly how a team gets as bad as the Bobcats, I think I’ve found a breakthrough in understanding Charlotte’s issues. As it turns out, modern NBA teams are in love with a concept of a “Big Three.” If you happen to catch the NBA Finals, you might see that the Miami Heat have a “Big Three” made up of their most highly paid players – Dwyane Wade, Lebron James, & Chris Bosh. Many other teams like the Boston Celtics (Pierce, Garnett, Allen), the LA Lakers (Bryant, Gasol, Bynum), and the NY Knicks (Anthony, Stoudamire, Chandler) have used this template to collect and reward a core of their most talented players with the majority of their payroll. After a quick look at Hoops Hype’s salary info, it was evident that the Bobcats have a “Big Three” of their own – Corey Maggette, Gana Diop, & Tyrus Thomas. It can take a while to run the numbers, but you’ll find that Charlotte’s “Big Three” doesn’t seem to perform at the level of the league’s best teams with a comparably paid “Big Three.” I’m not fortune-teller, but it looks like this is going to cause problems for the Bobcats this coming season despite their high Draft pick.