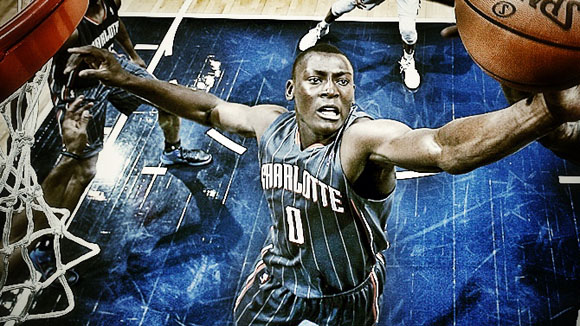 While the Lakers, Thunder and Heat fortify championship contending rosters, while the Pacers and Clippers set their sights on Playoff success and while the Warriors and Bucks attempt the leap from Lottery to postseason, the Charlotte Bobcats will aspire to a comparatively modest set of goals for the upcoming season.
Coming off an infamous seven win campaign, the team will not only strive to become more competitive but will look to further develop a long and grueling rebuilding project. Good news for the fans: The project is moving along nicely.

Win #1. The Return of Tyrus Thomas

Tyrus has replenished and re-nourished himself after last year’s celebutante crash diet, notching a couple impressive performances during the Preseason. A reinvigorated Tyrus would do wonders for the organization. The team owes him $26m over the next three seasons and with Andray Blatche having been amnestied by Washington, “T-Time” has become the league’s worst, most untradeable contract. The Cats would be forced to use their own amnesty clause on Tyrus if he continues to regress and one could only imagine Michael Jordan’s reaction to paying out $18 million on a player not even on the roster.
WIN SCENARIO: Tyrus proves last year a fluke and returns to previous form, cementing his place in the starting lineup by averaging a double-double and upping his trade value in the process. Amnesty, amnestied.

Win #2. Henderson & Mullens Prove Their Worth

Next July may seem like an early Christmas for GM Rich Cho, who will be pleased to find an extra $13m or so in cap space under the tree. The pygmy albatross contracts of Gana Diop ($7.3m) and Matt Carroll ($3.5m) will finally come off the books as will now redundant shooter Reggie Williams ($2.6m). But all will not be so simple. Cho could find a potential lump of coal in his stocking in the form of the team’s two restricted free agents: Gerald Henderson and Byron Mullens.
Henderson is coming off of his best season as a pro, establishing himself as one of the league’s better defensive two guards and a competent scorer. The problem? Try defining the ideal two guard in the modern game:
He is either

Henderson doesn’t fit either of these molds. He’s closer to Wade than Thabo in stature but doesn’t have Dwyane’s scoring ability. And he’s not a three point threat (career high 47 attempts last season with only 11 hitting pay dirt). So either Henderson will need to add a deadly long range shot to his game or he is simply a decent starter on a bad team. Add Henderson’s cap hold ($4.3m) to Cho’s war chest and suddenly the Bobcats are in the market for an All-Star caliber shooting guard should the opportunity arise. If OKC stumbles in the Playoffs again, look for James Harden as a real possibility here.

Former Thunder first rounder Byron Mullens is another question mark. The seven footer looked the part of a young Dirk Nowitzki for two weeks last season until the advance scouts took notice. Still there were enough flashes in March and April to entice should the artist formerly known as BJ improve his matador defense and expand his offensive repertoire. (As it stands now, Byron’s best shot is Coach Dunlap’s least favorite: the long two.)
WIN SCENARIO: Henderson and Mullens either break out into potential All-Stars (unlikely) OR improve enough to be used as trade chips for an actual All-Star caliber player like James Harden (less likely) OR improve and re-sign with the team for reasonable money (most likely).

Kemba Walker’s rookie campaign was a trick or treat sack of the tasty (surprisingly solid D, great handle) and the gross (dribbling by himself for 15 seconds of the shot clock, forced fadeaways) — Kyrie Irving he was not, but to blame this entirely on Kemba given the team’s severe lack of talent and coaching seems myopic. Coach Dunlap’s proposed fast-attack system is custom designed for Walker to exploit. No other Bobcat (and few others in the league) can get to their spot like Kemba; a reliable floater and smoothed out stroke could likely elevate Walker into Ty Lawson territory. However the season plays out, the Bobcats must determine if Kemba is their point guard for the long haul.
WIN SCENARIO: Kemba improves his shot and court awareness; takes sole possession of the starting gig by midseason and never looks back.

Biyombo lived up to his billing last season, putting the “smack” in Bismack while generally disrupting things on the floor for opposing offenses. The Congo teen sensation single handily made an all-time terrible team worth watching with his tenacity and enthusiasm on the defensive end. Never mind Biz couldn’t finish two feet from the basket or that he practically forced his co-workers to play 4 on 5 at their end. Those things could be looked over in a strike-shortened tank-fest (sans training camp) but Biyombo must further develop his game if the Bobcats expect to build something from this mess.
WIN SCENARIO: Coach Dunlap has asked Biz to be more than a one dimensional shot-blocker and Biyombo has looked a bit lost in the expanded role. He’ll need to continue to work towards a consistent short range game and further taps into his limitless potential on D. Charlotte has few difference makers on the roster. Bismack could certainly be one.

To be continued in Part 2…