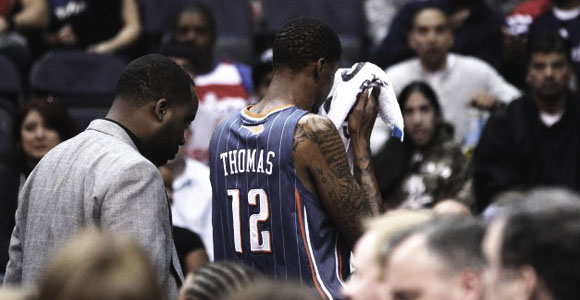 Will Tyrus Thomas Ever Figure It Out?

High draft picks are NBA gold. Score enough of them and even the most dysfunctional of franchises can attain relevance. Smart executives covet them like Gollum on a Ring binge, parting with their own about as easy as Chuck Heston lets go of a Smith & Wesson.

Which brings us to Tyrus Thomas. Turning just twenty-six years of age next month, Thomas has already cost two franchises high draft picks (Chicago’s #2 overall in ’06, Charlotte a likely lottery pick in ’14) and may well be on his way to costing the Bobcats another if management deems the $24 million remaining on his contract too big to amnesty. The ‘Cats desperately tried to unload him during the draft, dangling their highly coveted number two overall pick as trade bait but couldn’t score a single worthy bite.*

In retrospect, they shouldn’t have been surprised. This was the same player who would run a self-imposed, one man fullcourt press on routine inbounds plays. Who would regularly sky high for an offensive rebound then immediately follow it with a twenty-foot-hand-in-his-face fadeaway. Who forced a gentle old man into an act of unmistakable violence. Quirky personality? To say the least.

Thomas seemed to take training queues from Christian Bale’s “Machinist” last offseason, stripping his body down to skin and bone — it was a sight rarely seen: An NBA veteran showing up to camp underweight. Thomas struggled to guard anyone stronger than Austin Daye, played most of the truncated season out of position as a small forward and generally stunk it up whenever he was on the court. The entire episode was a disaster within a disaster, culminating in Paul Silas’s reverse Spreewell choke-out April 15th.

By choosing not to exercise the amnesty provision this summer, the Bobcats gave themselves an out should Tyrus prove last year no fluke. That’s the worst case scenario. A better version would have Thomas arrive at camp closer to his 240 pound playing weight, mentally focused and prepared to listen, where he’ll find a coach perfectly suited to enhance his game.

Mike Dunlap wants to create turnovers, push the tempo and lock-down anything that drives. Tyrus’s long 6’10” frame, lateral quickness and shot-blocking ability are perfect for such a system. He can guard either forward spot and hang with most of today’s centers. Put a re-focused Tyrus, Bismack Biyombo and Michael Kidd-Gilchrist on the front-line and DARE opposing wings into the paint.

The strategy for Coach Dunlap seems obvious: play Thomas 20 minutes a night, simplifying his accountabilities: Block Shots, Rebound the Ball, Deny Position Underneath. If you do that, we’ll run a few pick ‘n pop/kickout sets your way. Basically, be our version of Serge Ibaka. He does this with consistency and the team can trash the amnesty. Tyrus will be bargain and the Bobcats will be a much, much better team. If not? Tyrus becomes yet another cautionary tale in the book of High Ceilings, Low Results.

*Some perspective: Just last month former Executive of the Year Joe Dumars tossed a high first rounder Charlotte’s way as renumeration for Ben Gordon’s ’13-’14 salary. Just one season. For a player who can still contribute. Who isn’t a locker room problem. One can only imagine the price for taking back T-Time’s contract.