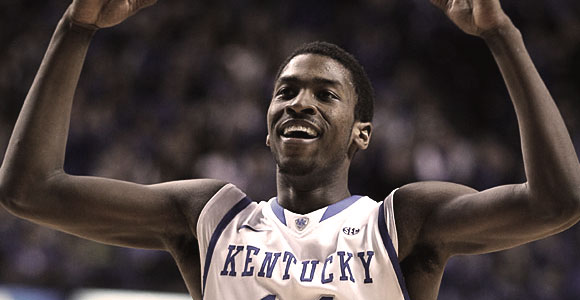 PART I – What Just Happened?

The Bobcats stunned the internet Thursday night by selecting Kentucky freshman Michael Kidd-Gilchrist with the second overall pick in the 2012 Draft. For those of us glued to Twitter and Hoopshype, the pick was a surprise because:

So why did Charlotte forego dreams of a sure-fire big man starter at #4 (Thomas Robinson) and another prospect at #24 (Tony Wroten, Perry Jones or Marquis Teague) in order to keep the pick and draft an 18 year old with a broken jump-shot?

PART II – Why It Happened

Thomas Robinson only covers one of these guys on a good day. MKG can match up with ’em all.

Robinson is an old-school bruiser who could’ve banged with Charles Barkley or Karl Malone back in the day. Meanwhile, this year’s Finals featured James and Durant playing the bulk of his team’s minutes at the four spot. I like Robinson but there’s no chance he’s checking either of those guys.

By adding Gilchrist to a squad which already includes Gerald Henderson (a near lockdown defender at both guard spots) and Bismack Biyombo (still developing but a defensive juggernaut in the making), the Bobcats have three players who could legitimately challenge for All-Defensive team in the near future.

MKG also fits perfectly with new head coach Mike Dunlap’s philosophy of fitness, effort and easy transition buckets. Good news, coach, MKG isn’t just “fit” he’s “relentless”. No player on the roster has been able to make Gana Diop or Tyrus Thomas feel bad for giving less than a 100% thus far but I think Gilchrist the “Culture-Changer” has a shot.

The team just announced it’s extending qualifying offers to both D.J. Augustin and Derrick Brown. I’d bet on Brown being on the roster in November – he fits the mold described above. Augustin? This seems more like a strategic move – He has value but I‘m not certain he’s in the team’s long-term or even short-term plans – so don’t be surprised to see a sign & trade go down later in the summer.

By not qualifying D.J. White, the front office announced that they’ll be going after another power forward via trade or free agency. Again, considering the new philosophy, they’ll be looking at players who can play both big man positions, run the floor and affect the game defensively. Jason Thompson (RFA) and J.J. Hickson (UFA) will certainly be high on the list. Considering Hickson’s perceived character questions, Thompson seems like an ideal fit. I’m also a fan of Ersan Illyasova but expect his asking price to be far north of what the Bobcats can offer.

Potential sleeper: Toronto’s Jerryd Bayless (RFA) is a big-time paint scorer and could be had via sign & trade (Reggie Williams’ expiring – Raps will need shooters around Jonas Valanciunas); especially if Toronto ends up using all of their cap space on Steve Nash in the next few weeks.

Finally, I would love for the team to invite Iona State PG Scott Machado and/or Georgetown C Henry Sims to camp as undrafted free agents – perhaps their agents could be enticed with the promise of playing time.

Lost in the MKG Draft night confusion was this simple fact: The Bobcats are suddenly better. If a few of the above moves go down, they might even be decent:

Not bad at all. Scoring from the guard spots, MKG can slide over and check fours during small-ball lineups. This team doesn’t win 30 games necessarily but is set up very well moving forward especially if Tyrus rebounds from a wacky ’11-’12 campaign and if Byron Mullens rebounds (at all).

Two lottery picks next summer, another $10-15 million in cap space, amnesty provision card in their back pocket and another year of growth for their young players. The Bobcats’ future is bright and that might be the biggest surprise of all.

*anybody who can manage to get Cory Higgins on an NBA roster is crafty to say the least.

8 thoughts on “MKG is the Future”