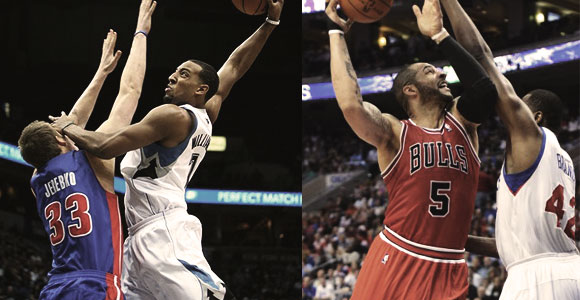 As good as the Charlotte Bobcats have been over the season’s first month, they still have a few things to sort out. One is rebounding. The Cats’ -3.00 differential places them in the bottom third of the league – a deficiency that nearly cost them last night’s game at Washington. Second is low post scoring. Other than the occasional Brendan Haywood baby hook, Charlotte big men pose zero threat from the low block.
Fortunately there’s some available talent in the league who could remedy the situation without sacrificing much of the Bobcats’ long-term plans. Here’s two ideas:

Why Chicago Does It:
The Bulls 2013-2014 payroll is already $7 million over the luxury tax line. This means owner Jerry Reinsdorf will be on the hook for at least $14 million in tax penalties two summers from now – and that’s before Chicago fields an entire fourteen man roster (their $77 million payroll accounts for only nine players).
The simplist option is for Chicago to use its amnesty provison on Boozer but that would come at a steep cost – the team would be on the hook for $20 million or so of his salary even after a waiver claim (see Brand, Elton).

Why Charlotte Does It:
Fit for one. Boozer’s ability to score in and around the low post would generate double-teams to free up the Cats’ long distance shooters. Pick and pop opportunities with Ramons Session and Kemba Walker would add another weapon to the team’s limited halfcourt arsenal. Boozer’s ability to hunt for rebounds at both ends will help put an end to those 3-4 shot defensive stands.

From a salary perspective, Charlotte takes on an additional $7 million or so on top of what they were paying Thomas for the next two seasons – timing it near perfectly with their first batch of Rich Cho era re-ups (Walker, Biyombo, Taylor).
Take a look at the salary chart.

Assuming both Byron Mullens and Gerald Henderson re-sign for around 4 years/$27 million (doubtful team would go higher on either), Charlotte would enter next season a shade over the league’s $59 million cap but well under the tax threshold. In July of 2013, the Bobcats would shed Ben Gordon’s $12 million and likely divert a portion to re-signing Ramon Sessions (if they don’t use one of their three to four first round draft picks from 2013 or 2014 on a point guard).

By July of 2014, Charlotte will have nearly $20 million in expiring contracts (Boozer/Haywood) coming off the books and they can use the space to extend the class of ’11 (Walker/Biyombo) and Jeff Taylor. They could also pursue a max superstar (or two) while maintaining the rights to Walker and Biyombo via cap holds ala Brook Lopez with the Nets last summer.

In the meantime, the Bobcats stay very competitive. A big man rotation of Boozer/Mullens/Haywood/Biyombo brings to mind “Utah East”. Henderson/Gordon/MKG/Taylor form a nice wing platoon. And we already know just how good the Walker/Session backcourt can be.

A variation of this trade would send Boozer and a first round pick to Charlotte for Thomas, Hakim Warrick and Gerald Henderson. Chicago would have the ability to decline Rip Hamilton’s $5 million next season, re-sign Henderson as its starting SG and pursue another piece via cap exception due to Gerald’s RFA status. In exchange, the Bobcats receive their own pick back from the original Thomas trade.

Why Minnesota Does It:
As a near lock-down defender with an ability to score from inside and out, Gerald Henderson could be the perfect fit for a Wolves team stacked at every position except off guard. Henderson will do for Minny what Brandon Roy was supposed to.

Why Charlotte Does It:
With Jeff Taylor playing lights out of late, there’s just not going to be enough minutes in the wing rotation. Ben Gordon needs to play and isn’t going anywhere. MKG is MKG. Sessions and Kemba will play at least fifteen to twenty minutes a night together so Henderson is the odd man out. Add to this his impending contract extension and it’s doubtful Gerald stays in the QC past this season.

Meanwhile, Williams adds a moderately priced young power forward with upside. Someone who likes the ball in his hands, someone who can finish from the low block and who the team could potentially run their offense through. Although Williams has struggled playing out of a position at SF during his stint with the Wolves, with the Bobcats he’d be a permanent fixture at the four.

The only downside is the timing of his contract. Barring some unforeseen All-NBA selection over the next two seasons, Williams will be up for an extension the same summer as Biyombo, Walker and Taylor. While the Cats will have the cap space at that point to re-sign all four, it could make the process a bit complicated.

2 thoughts on “Two Trades to Add Frontcourt Scoring and Rebounding”