It’s been a little while since we’ve posted any recaps on Bobcats Baseline. Sure, plenty of excuses could be made for this. Really, it all comes down to a downturn in enthusiasm. It might be impossible to accuse any Bobcats blogger of being a fair weather fan, but this team sure does make it tough. December  was a pretty dark month, as the Cats only one 1 of their 20 games. So, the new year will be my time to re-energize or spirits and express some loose thoughts on the current state of the Charlotte-based club that we wish wasn’t so terrible at professional basketball.

Let’s Look at the Positives

Um, there are some positives right?

We can celebrate the fact that the Cats have 2 more wins than all of last season! How about that for improvement. Actually, let’s be grateful that we no longer have to see Corey Maggette on the court. His ability to make basketball unwatchable has perfectly suited all of the teams that have paid him so much money. Now, we get Ben Gordon – gettin’ hot and doin’ Ben Gordon thangs. Oh, and we should be happy that none of the important guys have suffered any serious injuries so far this year, either. Don’t try to tell me that Byron Mullens’ counts as important.

Let’s give Mike Dunlap some credit. He worked hard to install a defensive attitude to this team all throughout training camp. While that’s not actually shown any on-court results for the Bobcats, he has a fine excuse for the team playing offense like a YMCA pick up game. Well, maybe they could use at least one player that could score in the half-court offense. But, that’s a whole other story for another day. Realistically, Dunlap gets credit for the way the team has kept up their effort. They might not look or play like winners, but they’ve fought and hustled through nearly every game this year. No one is hanging their heads despite their collectively horrible record.

So, it’s been awesome to watch Ramon Sessions step on the floor and perform like a professional at every opportunity. He seems to do all that’s within his ability to give the team what it needs when he’s on the floor. Teams like the Spurs have 7 or 8 guys like this. The Bobcats have about 1.5. 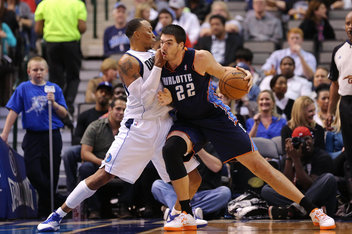 Remember when Byron Mullens was often the focal point of the Bobcats’ offense? Ugh. I know some folks like the unconventional, and seeing a 7-footer hitting long range shots sure was appealing. But Byron was failing at nearly every other aspect of the game. He’s no Dirk, and his teammates were punished for just about every minute he was on the court.

Now, we’ve got this weird platoon of Tyrus Thomas, Hakim Warrick, and Jeff Adrien. Where do you start with this squad. If we throw Byron in this pile, we still get one of the weakest performing collections of power forwards that the league will see for a long time. But I’ve got to admit that it’s fun to watch Jeff Adrien. His game is so old-school, and it’s great to see a D-League guy perform when he gets the chance. This might be one of his only seasons in the NBA, so let’s enjoy his stable, predictable style of ball. His game is so much more palatable than the 2013 Tyrus Thomas Jumpshot Clinic & Dribbling Exhibition.

What’s up with Gerald Henderson? He comes off the bench and seems pretty quiet these days. Somehow he always ends up in double digit scoring, and finds a way to never take it to the rack. I remember when jumping was one of the easiest things for him, and his shooting was shaky. By starting Jeff Taylor, I get the feeling that the Bobcats are feeling out what life without Henderson is like. I wouldn’t be surprised to see him traded or heading elsewhere this summer. Personally, I like his game a lot, but he might have a better role on another club. 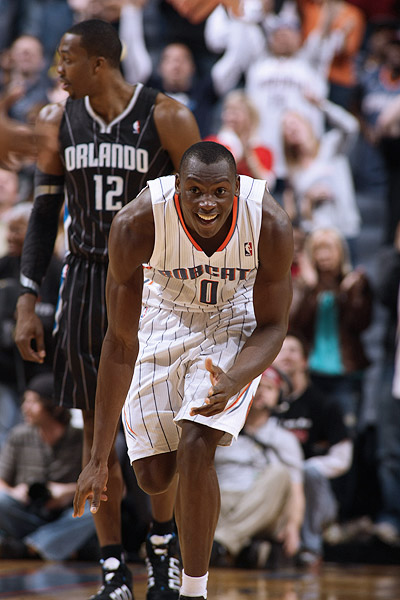 Wasn’t Bismack Biyombo supposed to get better? Out of all of the discouraging comments that the Utah Jazz broadcast crew spouted during their game, there was one that stuck with me. Continually, they stated their opinion that the Bobcats were loaded with athletes that weren’t actually basketball players. You could probably say this most accurately describes two of the Cats – Tyrus Thomas and Bismack Biyombo. Potential and “development” were the themes we heard when Bismack was drafted. Right now, it’s starting to seem a little unrealistic to expect much from the kid. Let’s hope that he maintains his work ethic and the team provides him with everything he needs to grow and understand basketball at a pro level. Maybe they can keep Tyrus around as a cautionary example for him. “Hey, Bis – you don’t want to end up like that guy.”

As I mentioned, I caught the Jazz-Bobcats game on NBA League Pass last night and it was quite a treat to hear the Utah broadcast team’s opinions on Charlotte’s team. Most times, I enjoy hearing an alternative to Charlotte’s homer duo of Steve Martin and Dell Curry. Usually, the other teams have a very balanced and straightforward play-by-play guy and some awfully unintelligible color commentator that provides a good deal of exclamatory oohs and ahhs. The worst of these might be Dominique Wilkins. Check out an ATL game sometime and you’ll enjoy listening to how bad he is at his job. Last night, the Jazz team had a pair of absolutely sober guys that continually bashed the Bobcats performance, roster, and organization. To add insult to injury while the Jazz piled on a barrage of unanswered points during the 3rd, the color commentary dude just went on an unprompted and disconnected tangent about how he “didn’t know what this club can do” and mentioned how Charlotte was such an exciting place for basketball back when “there was the Hornets and Alonzo Mourning…”  Ouch.

Let’s hope Charlotte can start to turn this thing around. We can’t let Mike Dunlap get the Paul Silas Blues. Things look to change over the next couple of years – David Stern will step down, the Hornets could be back, Gana Diop will retire, Tyrus Thomas should be gone, and Kemba might be good enough to threaten to take his talents to South Beach.

One thought on “Bobcats Mid-January Recap”