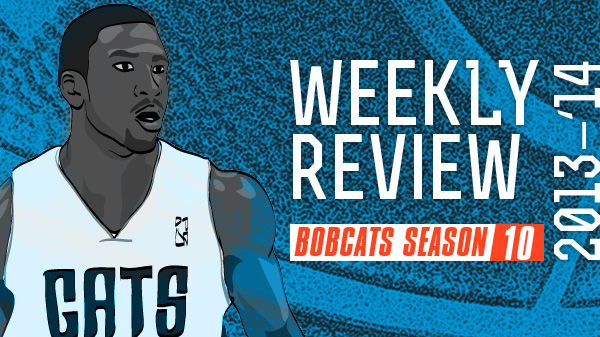 What’s this?! A Charlotte NBA team fielding an actual competitive NBA roster?! Is that a qualified NBA coach with a real deal playbook and sensible rotations? Are those Bobcat Draft Picks doing things??!! Are the Byron Mullens days really behind us for good???!!!

Don’t get me wrong, there are still plenty of rough edges to smooth out for this young team but the first week of the FINAL BOBCATS SEASON shows plenty of promise – and promise has been in very short supply over the past few years at the TWC.

Charlotte finishes the week at 2-2 after:

We still don’t know what the Cats’ offense is going to look like once Al Jefferson is fully integrated (he’s been nursing an ankle since the opener) but the safe money is on Charlotte continuing with heavy pick and rolls and off-ball screens for their point guards. Gerald Henderson, the team’s lone wing who can create his own offense, has been dreadful from the field (30%) during first four contests, meaning that the Bobcats’ only real chance at opening up good shot opportunities is through out-hustling or confusing opponents via screens.

Here’s how 99% of Bobcats offensive possessions have gone during the past week:
IF PG = “Kemba Walker” THEN:
PASS BALL TO “Josh McRoberts”;
LOSE DEFENDER ON BASELINE SCREENS;
RECEIVE HAND OFF FROM “Josh McRoberts”;
SHOOT.

The “SHOOT” option hasn’t really been working out as the Bobcats rank second worst in the league in FG% at 40%. They’re in the bottom ten worst in every 3PT shooting statistic and second worst in FT%. Coincidentally, Charlotte’s 89.8 points per game is third worst overall.

Now for the positive: The Bobcats have been getting to line like a team full of 2006 D-Wades, averaging 33.0 attempts per game – good for third in the league behind the star-powered Rockets and Clippers.
Take a quick guess at who’s ranked 10th in the NBA in FT attempts, one spot ahead of Lebron James? None other than “Razor” Ramon Sessions at 32 freebies in just 96 minutes played. Dude is averaging a free throw attempt every three minutes; just an insane number to start the year.
Another positive: Clifford’s Bobcats are only allowing opponents 95 points per game – tied for seventh best overall. That’s up from second worst overall (102.7) last season. Let’s hope the small sample size holds up.

The 21 And Under Club

Prospects Bismack Biyombo and Cody Zeller all had some fine moments during the week but it was Michael Kidd-Gilchrist who tapped furthest into his UPSIDE with a defensive master class against Carmelo Anthony in New York. Anthony ended up with 32 points but most of that damage was done with MKG out of the game. After getting his nose busted by Kenyon Martin on a hard foul early in the second half, MKG returned midway through the 4th quarter and went full lock-down on Melo, constantly harassing the superstar on and off the ball. In just 26 minutes, Gilchrist dropped 16 points, grabbed 8 boards and swatted 3 shots, including a Gerald Wallace-esque breakaway block on Carmelo that ended in a coast to coast layup. I’ve publicly questioned MKG’s selection as the 2nd pick overall pick in last year’s Draft but if he can build on this type performance consistently, I’ll be proven absolutely wrong and loving every minute of it. Keep it up, young fella.

Know this: without perennial NBA castoff Jeff Adrien, the Bobcats would be 0-4. With Jefferson nursing a sore ankle and backup Brendan Haywood out until February, Clifford needed someone to step up and provide size and toughness in the middle. With 24 boards and 4 blocks in the past three games, Adrien has certainly delivered.
Ironic that his teammate Biyombo, a Lottery pick, was projected by experts as “a Ben Wallace type”, when it is Adrien who is the perfect heir apparent to Big Ben. Officially listed at 6’7″, the former UCONN Huskie looks to be no taller than 6’4″ Gerald Henderson in person sans mohawk. Like Wallace, Adrien was undrafted and floated around the league for a couple of seasons before finding a home. Big Ben hit his stride with Detroit at age 26. Adrien seems to be doing the same with Charlotte now at 27.

“Every day I’m around him, I’m more convinced he’ll be the leader of a really good (NBA) team,” Clifford predicted.

Tell us something we already didn’t know, Steve.