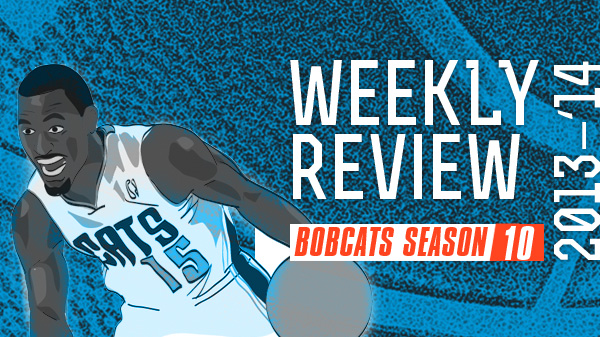 Another week, another .500 split for the league’s (fourth) best Defensive team. A heckuva stretch that saw the Bobcats:

You have to hand it to Steve Clifford. In the past week, his Bobcats have played full-throttle, basketballs to the wall defense for nearly every possession. At 92.8 points allowed on the season, Charlotte has entered an elite group that includes Indiana, Chicago and San Antonio. Remember that last year’s squad averaged a whopping 102.7ppg against – good for 29th overall. That’s a ten point swing that’s been accomplished with a nearly identical roster.

Clifford’s secret sauce isn’t much of a secret strategy-wise. You can see it just by watching the games: sacrifice the offensive rebound to prevent easy transition buckets, protect the paint area in the half court (even if it frees up a three point shooter) and swallow up as many defensive boards as possible. Meanwhile, let your team’s defensive position of strength (hyper-athletic wings) pester opposing perimeter players for 48 minutes a night.

The Bobcats are communicating, hustling and executing on D like they were the Chicago Bulls – which shouldn’t be that big of surprise considering Clifford and Tom Thibodeau’s shared coaching history. It’s only been twelve games, but if Charlotte can continue as a top 5 defensive team and get their best offensive player (Al Jefferson) healthy for good, we might be looking at a 40+ win squad. As last year’s Derrick Rose-less Bulls proved: You can live by the jumper and die by the jumper but defense is forever.

Last week we fretted over Kemba Walker’s post-shoulder contusion shooting slump. The fretting was soon upgraded to full-on Regression Alert after Kemba dropped a 14 for 51 stretch over the next three games, dragging his FG% dangerously close to sub-30% levels. Mercifully, a 12 for 20, 31 point performance against the Nets has us hoping again that the slump was an anomaly brought on by Metta World Peace’s thigh.

To Walker’s credit, he never once lost a gear defensively during the slump – highlighted by an amazing 5 steal performance in the Cleveland comeback. Kemba might not be the prototypical NBA point guard but he’s certainly in possession of a prototypical NBA mentality.

At least a few times a week, I get a snark-flavored tweet about how the Bobcats are playing their way out of a superstar in next June’s Draft. I understand the fear. I mean, even if Charlotte surprises everyone and makes the Playoffs, just how high is the team’s ceiling? Kemba Walker and Al Jefferson will both likely make the All-Star team at least once in their careers. MKG is a jump-shot away from being a multiple time All-Star (but that jumper may never come). Jeff Taylor and Cody Zeller are both likely to become very good NBA starters at some point, at least on the level of their teammate Gerald Henderson. That’s it. That’s the “core”. It’s not very sexy but it’s solid, with room to grow.

And next summer, regardless of how the Lottery shakes out, the team will have around $19 million in cap space to bring in another difference maker. Gordon Haywood and Lance Stephenson are game-ready, under-24 restricted free agents who could immediately upgrade the team’s long distance shooting. The mid-first round picks owed by Detroit and Portland could produce a Dario Saric or Andrew Harrison off the bench. That’s a very good NBA team. One that can win a lot of games for quite a while. And winning for a while breeds a winning culture. That’s called Stage One.

The Miami Heat organization experienced this Stage during the Alonzo Mourning/Tim Hardaway/Eddie Jones era of the late ’90s. Were they good enough to win a title? Nope. Not even on paper. But the culture they created eventually led to the franchise drafting Dwayne Wade and knowing HOW to build around him for their first title in 2006. Not a single NBA champion since 1980 has gone directly from perennial doormat to Larry O’Brien in one Stage.

The Charlotte Bobcats are transitioning from terrible to not bad. The Charlotte Hornets will go from not bad to very good soon after. Let them build a winning culture that knows what to do with talent first, then we can talk about tanking for Lottery saviors later.