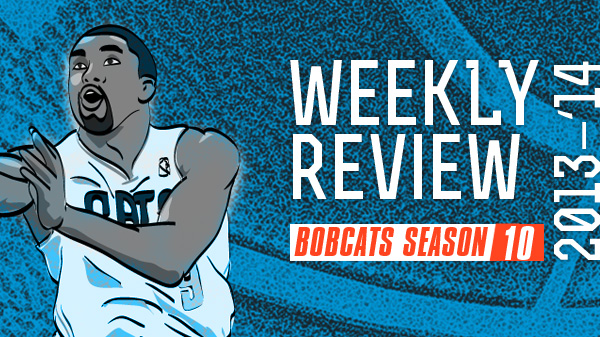 The Bobcats go 1-2 on the week, facing off against one terrible team, one great team and one average team, a completely respectable stretch that included:

The Bobcats flashed their potential Sunday night against the Heat. Miami played a very good 48 minutes yet needed an improbable Chris Bosh back-to-back-to-back three point barrage in order to trump Coach Clifford’s swarming defense. Kemba Walker hit some tough shots (27pts, 10-22 from the field) and Al Jefferson gave the team just enough post offense to force Miami’s vaunted defense to open up a little. Tragically, the Cats’ defensive rotations deteriorated in the last few minutes – combined with the roster’s inexperience and some questionable officiating, a huge victory was transformed into a moral one.

Two nights later the Bobcats flew into Dallas with chips on their shoulders, taking a double digit lead into the fourth quarter and looking every bit the part of a legit Eastern Conference Playoff team. Then MKG breaks his hand. The lead vanishes. The Cats have no answer for Monta or Dirk. Game over and big questions loom.

Out 4-6 weeks, Michael Kidd-Gilchrist’s absence is a major cause for concern: not only will the Cats be without their best perimeter defender but his 26 minutes per game will likely be divided up between Anthony Tolliver and Ben Gordon (professors emeritus at the Nash & Calderon Security Academy). Barring a Jimmy Butler-esque mid-season breakout by Jeffery Taylor, this 8-11 Bobcats team is about to get demonstrably worse. So what happens next?

The Bobcats’ front office must not only decide which direction they want to go but also the feasibility of either direction given the state of the league and their own roster. This year’s Lottery is stacked with potential and the Cats lack a surefire All-Star prospect, so why not throw in the towel and stink it up for one last season before breaking out the teal & purple next Fall? Not so fast. The Bobcats’ pick MUST fall between 1-10 next May or else they lose it to Chicago as the final piece of the Tyrus Thomas trade. With the Eastern Conference stinking so bad and the West beating up on its own dregs, there’s a great chance Charlotte finishes in the 8-9 range at the very worst – dangerously close to that 11th Draft slot.

This kind of worst case scenario was surely discussed before the team signed Al Jefferson in July – that the Bobcats could improve just enough to lose their pick in a loaded Draft while still not making the Playoffs. Competing might be the team’s safest option.

Charlotte’s needs are obvious: they need a floor spacer who can (ideally) create his own shot and won’t kill them on defense. Preferably this player won’t tie up any major long term money or cost prospects or draft picks in return.

I did have Luol Deng in this group but since Chicago is incapable of being bad enough to grab a high pick, my gut tells me that they’ll stay competitive despite losing Derrick Rose for the season. Of the remaining three, Granger is an expiring contract who hasn’t been healthy in two years and no one knows what he has left in the tank. Gay could certainly help and Toronto would basically give him away in a salary dump but there’s that whole $19 million player option next season. Chandler is due $6.7 million next season and would likely cost the Bobcats something of minor value in return – but he can hit the three and is a solid defender.

Carter’s in the last year of a reasonable $3 million per season deal. He can still stroke it from the arc and can occasionally pull off a Vinsanity throwback for a quarter or two at a time. Nearing age 37, Carter could wind down his career not far from where it all began in Chapel Hill. Outlaw is a younger option, less dynamic of scorer overall but a very good three point shooter (33% over his ten year career). It’s likely Sacramento would give him away just to dump the $3m cap hit next season.

Spare me the advanced stats minutiae for a moment, it’s obvious to anyone who watches basketball that these two teams should’ve swapped SFs from Day One. Barnes gives an offense-starved Bobcats team a volume scorer/floor spacer in the making, while MKG is exactly the sort of hard-nosed glue guy the high octane Dubs could ride to the Western Conference Finals. Unfortunately, with MKG out for 20 games or so, the Warriors would have zero interest making this deal now – especially with Andre Iguodala sidelined indefinitely.

The Cats showed some interest in Phoenix’s Marcus Morris before the 2011 Draft and could try and buy high now that the elder Morris twin is putting it together for the Suns. Marcus is shooting an insane 41% from downtown – and has played well at both forward spots. If the price is right, Morris could be the ideal fit.