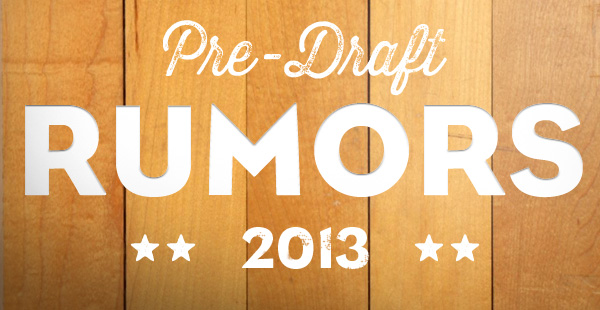 The final Draft in “Bobcats History” is less than a few hours away and everyone’s still confused as to what Cho & Co. have planned. Let’s run through the most likely scenarios:

Is Cody Zeller in the Mix?

Cody Zeller’s name has been linked to the Bobcats over the past 48 hours as a sleeper pick at number four. Not really a surprise as Zeller grades very well statistically (remember Cho’s famed database?). ESPN’s Kevin Pelton posted a great Draft Comp piece yesterday that had Cody’s collegiate numbers near identical to Lamarcus Aldridge and Chris Bosh – and neither of those two had a defensive phenom like Bismack Biyombo to develop next two.

Of course, this all might be a smokescreen to obfuscate the Charlotte’s actual target. Could it be Anthony Bennett? Victor Oladipo? Both of these players are projected in the Draft’s Top 3 but could also fall, especially if Cleveland passes on Nerlens Noel (Orlando would take him at two instead of Oladipo). Bennett and Oladipo can both be plugged into the starting five immediately and help. I’d put Otto Porter and maybe even Zeller in that category as well.

Will Alex Len Slip to the Cats?

Many mocks still have Charlotte staying put at four and taking Alex Len if Cleveland passes on the Maryland center at number one. Next year’s Draft lacks any top tier centers (at least for now) and Cho could elect to grab one while he has the chance. ESPN’s Fran Fraschilla – a guy who’s never been known for clickbait – projects Len as this year’s Jonas Valanciunas. That’s a big deal.

If Bobcats Select a Guard

If the Cats go with either Oladipo or Ben McLemore, everyone please send Gerald Henderson a nice thank you/farewell message on twitter. As a restricted free agent, the team will likely renounce Henderson’s rights as soon as free agency begins in July should they select a SG. Don’t worry Hendo fans, my gut feeling tells me that Charlotte will exit the Draft with either a PF or C and Gerald will be back next season.

An Option to Trade Back in the Draft

Trading back could be another option. We’ve known about the Minnesota “Derrick Williams, 9 and 26” proposal for a while. There could be other opportunities as well. If the team isn’t sold on any single prospect, then this might be the best option. UPDATE: Oklahoma City is another team that would like to move up and grab Len. They have the 12th pick and a few other nice prospects in Perry Jones, Jeremy Lamb and the Bobcats’ 2nd rounder (via the Byron Mullens trade). If Cho isn’t sold on any of the draft’s top talent, his old boss in OKC (Presti) might be the first call he makes.

Will Rich Cho Want to Trade Up?

Less likely could be a trade up scenario. Could an offer of Bismack Biyombo and the number four pick be enough to trade up to Cleveland’s 1st? If the team is sold on Noel and wants to tank another season in hopes of Andrew Wiggins, this might be their best bet.