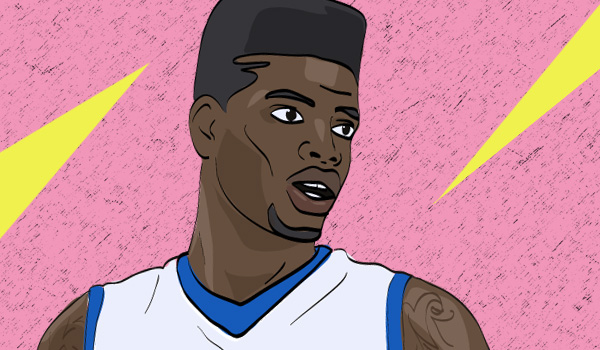 ASCHIN: Noel has been 2013’s projected top overall pick from the moment the 2012 Draft was over. Between the length, athleticism and instincts around the basket at both ends, it’s easy to understand why. But here we are, just days before the Draft and there’s talk that the 19-year old Kentucky center may drop out of the top spot. How is this possible? Has the hate gone too far or have the scouts and doctors just had enough time to properly evaluate Noel as a prospect?

BEN: Could there be a better scenario for the Bobcats than drafting Noel? He’s the guy everyone would have expected Charlotte to take had they won the lottery because of his enormous upside and interior presence. Not all great teams have a rim protector, but almost every team with a great rim protector is very good (Indiana, Chicago, San Antonio, Memphis, and even LA). Furthermore, it’s puts Charlotte in prime Wiggins/Parker/Randle position for next summer. What’s not to love with this pick? The dude was a beast at UK and even blew out his knee chasing down and blocking a guard on a fast break.

ASCHIN: I take it that you haven’t listened to the Bill Simmons Father’s Day podcast with Ryen Russillo. Turns out Noel has some world class “bad dudes” running his show from behind the scenes that make Lebron’s entourage look like a MENSA summit by comparison. Nerlens apparently blew off a dozen of the league’s top agents for months before signing with Andy Miller last Friday. Combine that with Noel’s slight frame (tough to add bulk to narrow shoulders), ACL injury, growth plate surgery, raw-as-Biyombo offensive game and you have potentially the WORST Bobcats 2013 Draft candidate. Frankly, Charlotte can’t afford to draft back-to-back-to-back defense-only projects and even if they could, would you really want to invest a Top 5 pick around “the next Theo Ratliff“?

BEN: I actually don’t see the weight issue as such a big deal. Dr. James Andrews recommended Noel drop weight to expedite the recovery, and Noel said he was 228 pounds before the injury. That means he put on 13 pounds in a half year at Kentucky, so he’s shown he can put on weight. But the Bobcats just need to add talent at this point, and he’s the most talented guy on the board. Sure, he may miss two months, but that’s a small sacrifice to make in an otherwise non-competitive season to land the most talented player down the board. He may be Theo Ratliff at the very worst but who is Alex Len if he doesn’t develop an offensive game? Timofey Mozgov? Noel offers the best interior defense in the draft – something the Bobcats desperately need – and he would give them a high-upside 7-footer, something the team has never had. As for the offense, Memphis seems to be doing just fine with about two offensive options, and one of those is Mike Conley. Mike Conley!

ASCHIN: 228lbs?! That’s losing 15% of his body weight in three months – if this were Sean May we were talking about maybe I’d buy it, but a beanpole like Noel? Sounds fishy. Regardless of his physical or mental makeup, I think all this Nerlens talk is doing a severe disservice to the team’s incumbent young rim protector, Bismack Biyombo. Am I crazy for expecting big things from the STILL ONLY 20 YEAR OLD former Lottery pick? Biz really improved his fundamentals this year even if it didn’t show up in the stat sheet and he’s becoming a better on-ball defender game by the game. Also: Biyombo weighs in at a chiseled 245 and still sometimes struggles with uber-bigs like Roy Hibbert (listed at 280). I can only imagine what Hibbert would do to a sub-225 pound bamboo shoot like Noel. #biznation

BEN: I’m a huge Biyombo apologist! Serge Ibaka didn’t break out until age 21 or 22, so I’m not totally concerned he’s having trouble catching the basketball just yet. But imagine how tough it would be to score down low with Biyombo and Noel awaiting. Charlotte could finally stop guards who thrive off penetrating, which has been one of the teams biggest issues. Imagine the two growing together under the tutelage of Steve Clifford–who has a great reputation of developing big men–and Patrick Ewing. Even newly hired Mark Price may help their embryonic offensive games. The only concerns I’m hearing are that Noel won’t play for part of this season (oh no, they won’t win a championship next year!) and his defense is way ahead of his offense. Given that he’s a year younger than Alex Len, don’t you think Noel will be better than where Len is right now in a year? Len has put up back-to-back pedestrian season, including nearly identical offensive numbers to Noel, despite getting much more praise. Len’s line was 12-8-1-2-0 on 53.4% shooting versus 11-10-2-4-2 on 59.0% shooting for Noel. Age matters, too.

ASCHIN: Well, I’m only a little younger than Tim Duncan so by that rationale, I should be drop-stepping Chris Bosh sometime before I hit 40. At some point you realize guys either have elite offensive instincts or they don’t and Noel clearly doesn’t. As well as Serge Ibaka has developed, he’s still very limited offensively. When’s the last time you saw Serge put it on the floor for a straight line drive? High posts? He sticks with his bread & butter 15-20 foot jumpers and finishes around the rim – both firmly in his wheelhouse. I think both Biz and Noel have that type of potential going forward but it would be damn near impossible to play them together without some world-class offensive phenoms surrounding them (see Ibaka & Perk in OKC). I’m not the biggest Cody Zeller fan in the world but I at least understand the philosophy behind considering him as the pick. You’d love to pair Bismack or Noel with a highly skilled floor spacer – especially with a short-range player like MKG at the other forward spot. So it’s gotta be either Biz OR Noel. And I’ll take Biyombo’s work ethic, attitude and physical size over Nerlens any day. #biznation

Also, Noel wouldn’t be able to suit up for the team until at least the All-Star break. I know that you are firmly in the pro-Tank ’13 camp but don’t you think it’s a tad bit disrespectful to ask thousands of fans to spend their hard-earned money on a team BUILT TO LOSE for a THIRD CONSECUTIVE YEAR?

BEN: I don’t believe for a second you’d rather take Zeller over Noel because he’s a “better fit”. I’d rather find fits for elite talent than fit together lesser talent. Just look at when Minnesota drafted Wes Johnson over DeMarcus Cousins because they needed a wing player. As for the last question, I think you can lower ticket prices as a good will offer if you’re really worried about fans, since winning will ultimately draw in the most money. That’s why I’d rather take the best talent (that also allows the team to capitalize on its likely three draft selections next year). Sure, Andrew Wiggins is far from assured, but from the looks of it, Jabari Parker, Julius Randle, Aaron Gordon, and Marcus Smart will be very good, too. A top-five choice if you draft Noel? That’s almost assured. Nearly every NBA superstar was taken near the top of the lottery, so why not go all-in on the best talent in this draft and the most hyped draft in 11 years?

ASCHIN: You lost me at “elite talent”. Chad Ford has Noel grouped with a half dozen other prospects in his 3rd Tier – that usually means starter not superstar. I just think Biz and Noel are the same player with similar upside. Nerlens has the edge in finishing instincts around the bucket while Biyombo has the will and physical size that will allow him to defend the league’s elite centers. As for the ’14 Draft, Marcus Smart was projected to be selected behind Noel all season long before he decided to return to OSU. And don’t forget, this time last year Shabazz Muhammed was everyone’s favorite savior. Remember all those “2012: The Greatest Draft Ever” articles? Didn’t exactly turn out that way.

When you combine the Lottery’s odds with perpetual Draft class uncertainty and the Bobcats’ less than stellar Draft record (Cho has been better but far from perfect), you are basically playing the PowerBall with your fans’ time and money. It’s irresponsible and short-sighted. Case in point: during the Hornets’ heyday, NOT ONCE did the team’s fans have championship aspirations. Not once. All the sell-outs, all of the love from the Muggsy to Divac to Mashburn and B-Diddy eras was earned from simply being competitive and hard-working. That’s really all the city ever asked from ’88-’98 – before the lockout and all the Shinn nonsense. Charlotte isn’t Vegas, it isn’t a win-or-gome home town. It only wants you to compete, play hard and not embarrass anyone. That’s pretty much the opposite of tanking.

BEN: Looks like we just differ in philosophies, and that’s okay. However, judging by Cho’s history and reported philosophy, I’m guessing he’s firmly in the Noel camp. Sure, he’s warted, but everyone else in the draft is warted, too. The one point I keep coming back to is that the potential three draft picks next year are among Charlotte’s biggest assets. You make a good point about overrating drafts, but no prep player recently has received the hype of Wiggins or even Parker. They can’t afford to squander having multiple high draft picks in such a highly-touted class, an opportunity that won’t come around for years. Since they already owe Chicago a first-rounder, they have no choice but to go all-in on the 2014 draft. And Nerlens Noel represents the chance to land the best talent in both drafts combined.